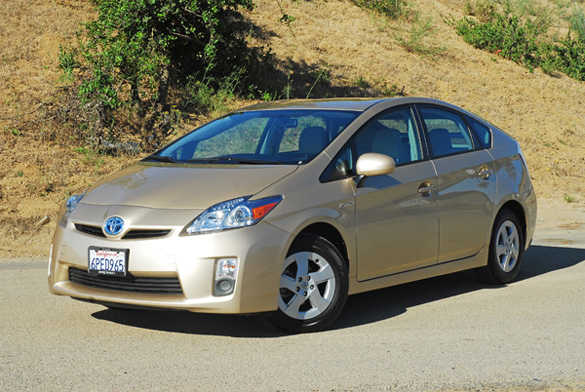 ‘THE ORIGINAL AND STILL THE BEST’

It has been a couple of years since I tested a new Toyota Prius hybrid but I have tested several other hybrids from the manufacturers who have started to build them.

I took a base two Prius and found that overall the hybrid is still the best with higher mpg specs, its unique styling, comfort and roominess and versatility.

The Prius continues to lead the market for hybrid automobiles that it started a decade ago. The third-generation Prius was all-new for the 2010 model year, with even better mileage ratings, enhanced performance, and more innovative design features than the second-generation version.  The 2011 Prius carries over with such innovative features as a moonroof with solar panels, dour driving modes, Advanced Guidance Parking System and steering wheel control that display on the instrument cluster.

The Toyota Prius-now synonymous with ‘hybrid’ entered the market in 1997 as the world’s first mass-produced hybrid.  The company’s exclusive Hybrid Synergy Drive System was introduced in 2004 on the second-generation Prius.  The Prius helped boost public awareness for the automobile’s role in the environment, specifically putting a focus on improving fuel efficiency and reducing carbon emissions.

The 2011 Prius is built using processes that reduce emissions in every stage of the vehicle lifecycle, from production and driving, through the eventual disposal and dismantling years down the road. 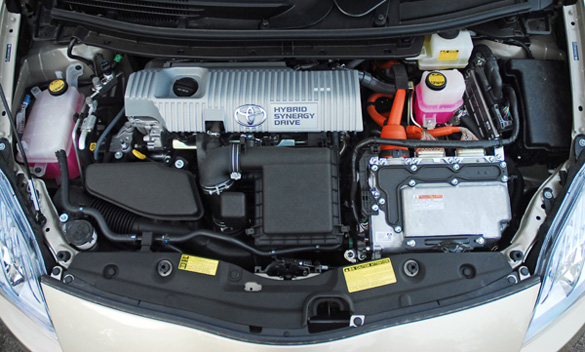 In the Prius, a 1.8 liter Atkinson-cycle, four-cylinder engine produces 98 horsepower at 5,200rpm.  Together with its electric motor, the hybrid system generates a combined 134 net horsepower, an improvement of 24 horsepower over the previous generation.  Due to the unique way that Toyota’s Hybrid Synergy Drivecombines the power of the gasoline engine and electric motor, you experience a feeling of torque in the Prius that makes it feel even more powerful that the output numbers suggest.

The use of an electric fuel pump and a new exhaust gas recirculation (EGR) system also contributes to the engine’s efficiency.  The 1.8 liter Prius engine is the first Toyota powerplant that requires no accessory drive belts, helping enhance powertrain efficiency and also potentially reducing maintenance costs.

Prius has been an uncompromised ‘full’ hybrid since its introduction.  This means that it can run on gasoline engine alone, battery alone, or a combination of both.  TheHybrid Synergy Drivewas completely re-engineered for the third-generation Prius, with lighter, more efficient components. 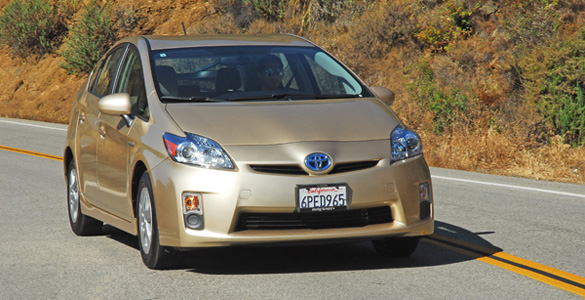 The 2011 Prius offers four driving modes-Normal, Power, Eco and EV.  The EV mode allows driving on battery power alone at low speeds for about a mile, if conditions permit.  Power mode increases sensitivity to throttle input for a sportier feel and is great when merging onto fast moving freeways or when you have to pass slower moving vehicles on said freeways; Eco helps you achieve the best mileage, best when driving short distances for your daily chores.  A multi-information display panel that monitors fuel and energy consumption is standard.  It provides feedback on the Prius’ efficiency using three different displays to help you adopt economical driving habits.

The 2011 Prius is certified as a Super Ultra Low Emission Vehicle and an Advanced Technology partial Zero Emissions Vehicle inCalifornia, as well as those states applyingCaliforniaemission standards.

The Prius design, by itself, came to represent ‘hybrid’ in the eyes of many.  The third-generation Prius preserved that brand recognition while expanding the role of efficient aerodynamics in overall fuel economy.  The 106.3 inch wheelbase is the same as the previous generation, while overall length is increased by just ½ inch to preserve the car’s efficient packaging.  The corners of the new-generation Prius are sharp and sporty.  Strong side character lines, rising from front to rear, define the smooth, geometric shape.  Viewed from the rear, the wider rear treads provide a solid, firmly planted stance. 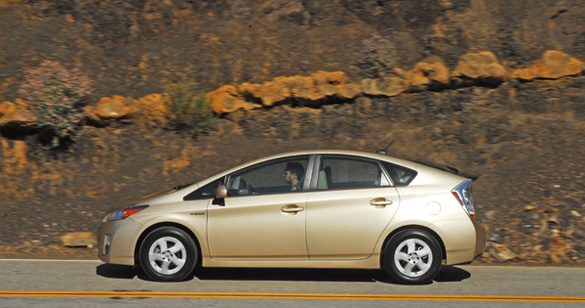 The third-generation Prius received more hours of wind tunnel testing than any other Toyota in history, resulting in one of the cleanest aerodynamic profiles of any mass-produced vehicle in the world.  By focusing on the shape of the body, underfloor, wheelhouse liner and wheel face design, the designers reduced the coefficient of drag to 0.25 from the previous generation’s 0.26.

Even with the increased focus on aerodynamic performance, the design is instantly recognizable around the world as a Toyota Prius.  The current model differs from the previous version however.  For example, overall height is the same for the two, but the new-generation model moved the roof peak four inches to the rear to enhance rear seat headroom.

An available sliding glass sunroof is package with solar panels, located over the rear seating area, that power a new ventilation system.  The solar powered ventilation system helps reduce the interior air temperature when parked directly in the sun.  Cool-down time is shorter when you return to the vehicle, thus reducing the use of A/C.

The 2011 Prius also offers a remote A/C system.  It is the first system in the world to function on battery-power alone, and it allows remote operation so you can cool the interior before getting into the car.

LEDs, optional in low beam headlamps, standard are halogen, are standard in the rear tail and stop lamps, helping to reduce the vehicle’s power consumption.  A/C, a major energy drain, has been re-engineered to increase efficiency and cool-down performance.  In addition, an exhaust heat recirculation system reduces heat waste by warming engine coolant during cold startup, for improved performance.  It also heats up the passenger cabin more efficiently. 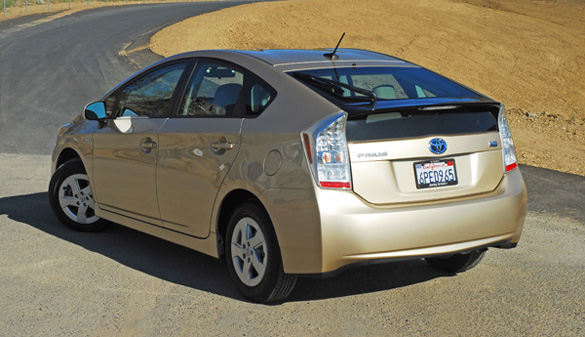 The third-generation Prius is built on a new platform that enables improved handling control and quieter operation.  The suspension employs an independent strut setup and a rear beam design, like the previous model, but handling response is sharper and the ride made smoother by improving the front/rear stabilizer layout and geometry and re-tuning the bushing characteristics.  The Prius stops quickly with power-assisted 4-wheel steel disc brakes-vented up front and solid in the rear.  Heavy-duty brake pads really pull the car to a full stop and the brakes regenerate electricity back into the battery so you know they are strong.  Total weight has been lessened with the use of aluminum for the hood, rear hatch, front stabilizer bar and brake calipers and by using super high-tensile strength steel in the inner rocker panel, center pillar and roof reinforcement.

Viewed from the cockpit, the center instrument cluster smoothly flows from the instrument panel to the console.  Handy storage space has been added under the shift lever by taking advantage of the shift-by-wire system.  Simple fin-type air vents and the judicious use of silver accents add a finished, technical feel and look.  The look is very modern, like the car’s concept of hybrid propulsion, and all switches, dials and levers are within easy reach and fully illuminated for safe nighttime travel.

In pursuit of new technologies for sustainable mobility,Toyota uses plant-derived, carbon-neutral plastics in the third-generation Prius.  Known as ‘ecological plastic’ the new material is used in the rear cushion foam, cowl side trim, inner and outer scuff plates, and deck trim cover.  Ecological plastic emits less CO2 during the production process than conventional plastic; it also helps reduce petroleum use. 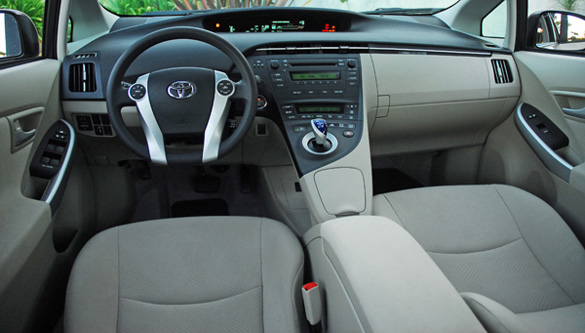 Dynamic Radar Cruise Control using advanced millimeter wave radar is optional.  The system also enables the available Lane Keep Assist, which can help you stay within the lane, and the Pre-Collision System, which retracts the front seatbelts and applies the brakes in certain conditions when a crash is unavoidable. 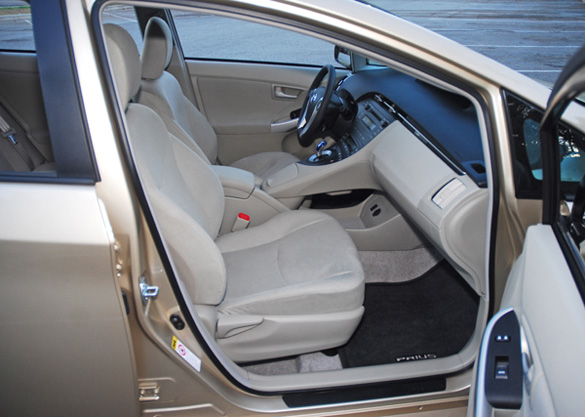 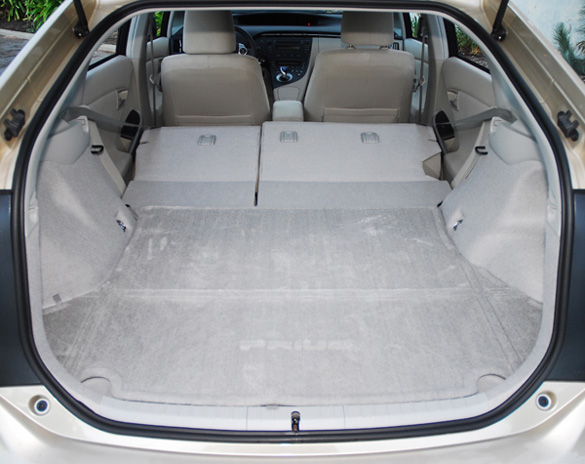 I tested the base two model and was happy with the standard equipment that made my ride more enjoyable.  It was loaded with what I would like to see in most regular gasoline powered vehicles.  The price was only $23,050.00 which is a little high for a mid-size sedan but you will save plenty of money down the line with an EPA mileage spec of 54mpg/city and 48mpg/highway.  You can even push those numbers higher by driving conservatively and not launching too hard and coasting to a stop when you see the traffic light change from green to yellow.