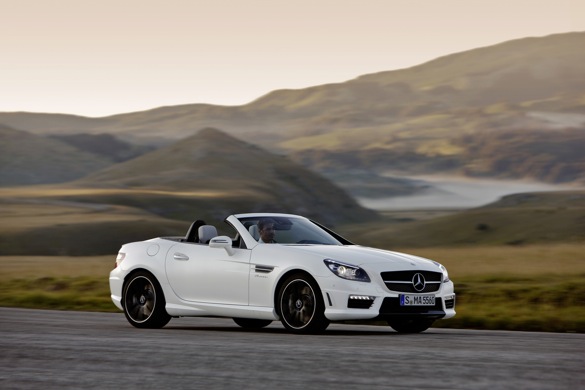 When it comes to sports roadsters with genuine pedigrees, it’s hard to beat the Mercedes-Benz SLK series. The littler brother to the SL roadster has been sold in the United States since 1997, and the car has racked up an impressive number of awards, including two Car & Driver “Ten Best” trophies and a “North American Car of the Year Award in 1998. An AMG-tuned SLK55 was even used as the F1 safety car in the 2005 season, and the SLK55 was the very first of AMG’s ultra-performance “Black Series” cars. 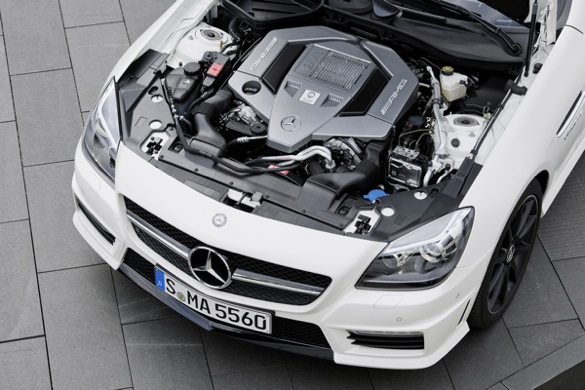 If performance is your focus, the SLK to have is the SLK55 AMG, and Mercedes-Benz is debuting the most powerful version ever built for 2012. The 5.5-liter V-8 now puts out 415 horsepower and 398 lb-ft of torque, which is good enough to get the roadster from zero to sixty in 4.5 seconds. Thanks to AMG’s advanced cylinder management technology (developed for Formula One), the SLK55 AMG can shut down four of its eight cylinders to save fuel, but only if the driver selects the “Controlled Efficiency” transmission mode. Even in this mode, bringing the other cylinders into play takes just 30 milliseconds at 3,600 rpm. 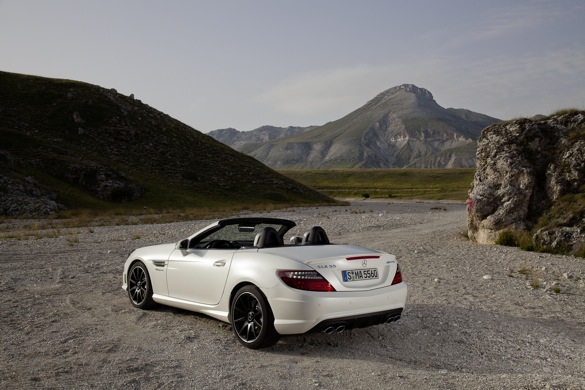 Cylinder deactivation isn’t the only fuel saving measure on the SLK55; in Controlled Efficiency mode, the engine also employs a start / stop feature to shut the motor off at traffic lights. Releasing the brake and applying throttle is all it takes to restart the engine without further driver involvement, but the start / stop feature is automatically disabled in Sport or Manual mode. The SLK55 AMG even converts kinetic energy from the braking system or a coasting engine to reduce the load on the alternator, preserving both horsepower and fuel economy. 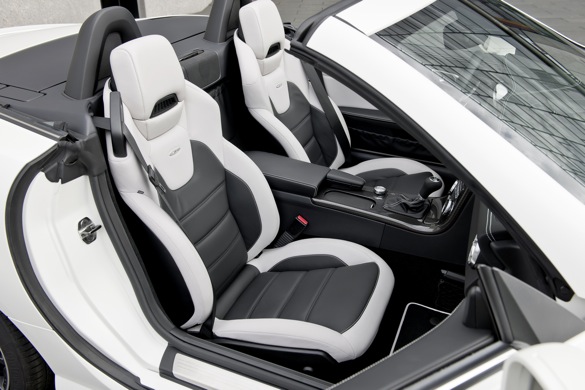 To optimize traction, the SLK55 AMG comes with torque-vectoring brakes and three levels of electronic stability control, including ESP On, Sport Mode and ESP Off. If you want the best handling SLK55 AMG money can buy, an optional AMG handling package provides stiffer springs and dampers, a locking rear differential and two-piece front brake rotors. 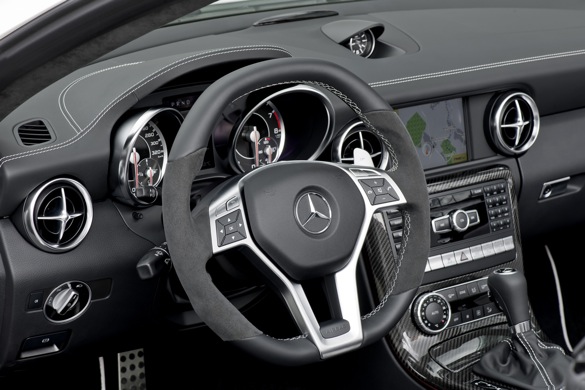 Inside, buyers get a distinctive interior, including AMG sport seats, a sport steering wheel and a unique dashboard and center console layout. There’s even three choices for a roof, including the standard retractable hardtop, a polycarbonate panorama roof panel or the panorama roof with Magic Sky Control, which lightens or darkens the glass roof panel at the touch of a button.

Look for pricing to be announced closer to the SLK55 AMG’s launch in the spring of 2012.