Introduction: 2012 Toyota Camry Burns Up the Internet with Kyle Busch at the Wheel 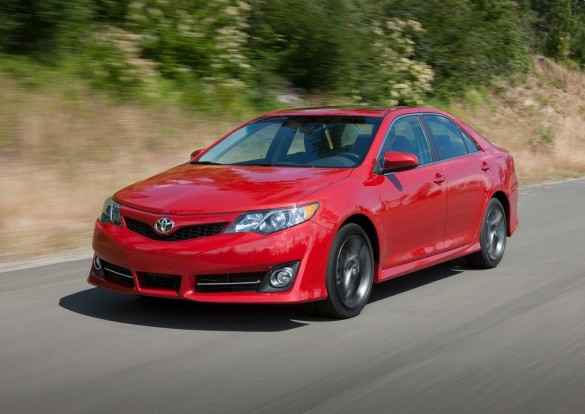 The new 2012 Toyota Camry has been unveiled continuing to be a benchmark for other midsized best-sellers in the USA. Toyota has kept things rather conservative in the new styling of the 2012 Camry to avoid swaying too far from its predecessor.

A new ad campaign, featuring Nascar driver Kyle Busch, has hit the internet with a creative contrast of the new 2012 Camry against the 800-horsepower Nascar Camry. Toyota cleverly rolls out the new 2012 Camry Hybrid in one of the ads in an “Electrifying” display.

The new 2012 Toyota Camry looks decent in my opinion and has become my “Guilty Pleasure vehicle” in the automotive enthusiast world. Toyota took an already good thing and made it, well, good again. Even the official 2012 Toyota Camry Daytona 500 pace car is a looker.

The only that question remains is, will the 2012 Toyota Camry keep its traditional sales records.

Be sure to hit up the videos and official 2012 Toyota Camry press release below for additional information, pricing and additional specs.

• 2012 Camry Has More Features and All Popular Models are Priced Lower or the Same as 2011s
• Class-Leading Driving Dynamics, Safety Features and MPG
• Camry Begins Arriving at Dealerships in October

“Despite all of the enhancements to the all-new Camry, prices for all popular models have been reduced with dramatic repositioning on SE, XLE and Hybrid models, representing the best value in the segment,” says Bob Carter, Toyota Group Vice President and General Manager. “Competing in the industry’s most competitive segment, we expect the Camry to continue as America’s best-selling car.”

The all-new Toyota Camry is powered by a revised 2.5-liter four-cylinder engine equipped with Variable Valve Timing with intelligence (VVT-i), which features reduced noise and vibration levels and produces 178 horsepower, an increase of nine horsepower, and 170 lbs-ft. of torque. Fuel economy is also improved with EPA estimated mpg ratings of 25 city/35 hwy/28 combined. All four-cylinder models are matched with six-speed automatic transmissions.

For those looking for more power, a 24-valve, DOHC 3.5-liter V6, which employs Dual VVT-i is available in the SE and XLE models. The V6 generates 268 horsepower and 248 lbs.-ft. of torque and is matched to a six-speed automatic transmission with sequential shift and has EPA-estimated fuel economy ratings of 21 city/30 hwy/25 combined.

Simplified Model Line-Up
The all-new Camry and Camry Hybrid will offer four different model grades to choose from. Camry will be available in the entry-level L, value-driven LE, premium XLE and sporty SE grades. The XLE and SE are available with four-cylinder or V6 engines. The Camry Hybrid is offered in LE and XLE grades.

The Camry L is equipped with an impressive list of standard features including standard Bluetooth® hands-free capability, air conditioning with air filter, power windows with driver’s auto-down, power door locks, cruise control, dual color-keyed power outside mirrors, projector beam headlamps, a tilt and telescopic steering wheel, tire pressure monitor system and a six-speaker AM/FM/CD audio system with an auxiliary audio jack and USB with iPod® connectivity. It also comes with 16-inch wheels and four-wheel disc brakes. All of this standard equipment in the Camry L adds up to an excellent value with a base MSRP of $21,955.

For $545 more, the Camry LE model adds to this package a long list of additional features starting with the all-new Display Audio system, which features a 6.1-inch touch screen that provides vehicle information and offers phone book access and music streaming via Bluetooth wireless technology. The LE model also includes remote keyless entry, auto on/off headlamps, side rocker panels with chrome inserts, steering wheel with audio and Bluetooth controls, and variable intermittent wipers. The Camry LE will carry a base MSRP of $22,500, a decrease of $200 or 0.9 percent compared to the 2011 model.

Four-cylinder SE models will have an MSRP of $23,000, a decrease of $965 or 4.0 percent. Despite adding content such as 18-inch alloy wheels, sport-tuned suspension, unique body styling, smart key, and Display Audio with navigation and EntuneTM, the 2012 SE V6 model will remain priced at $26,640.

The Camry XLE will start at $24,725 for four-cylinder models, a decrease of $2,000 or 7.5 percent compared to previous model year. Camry XLEs equipped with the V6 engine will come standard with Display Audio with Navigation and Entune, along with leather-trimmed seats with heated driver and front passenger seats, back up camera, and smart key. The MSRP for XLE V6 models will be $29,845, which is the same price as the 2011 model.

Camry Hybrid Offers More Power and Class-Leading MPG
The Camry Hybrid model is also reinvented for 2012, utilizing a highly revised Hybrid Synergy Drive powertrain that includes a new 2.5-liter four-cylinder engine, which produces a combined 200 horsepower and offers better MPG, all while featuring a significantly lower MSRP than its predecessor.

The Camry Hybrid LE not only delivers the best MPG of any mid-size sedan, achieving manufacturer-estimated 43 city/39 mpg hwy/41mpg combined, but it will also carry a MSRP of $25,900, an impressive decrease of $1,150 compared to the 2011 model. The premium Camry Hybrid XLE model features a MSRP of $27,400, a decrease of $800 compared to the previous model with upgrade package.

The new Camry models with four-cylinder and V6 engines will begin reaching Toyota dealers in October; Camry Hybrid models will arrive in November. The MSRPs for the 2012 Camry do not include the delivery, processing and handling (DPH) fee. The DPH for the Camry is $760. The DPH fee for vehicles distributed by Southeast Toyota (SET) and Gulf States Toyota (GST) may vary.