Jay Leno, Up Close And Personal With The Pagani Huayra 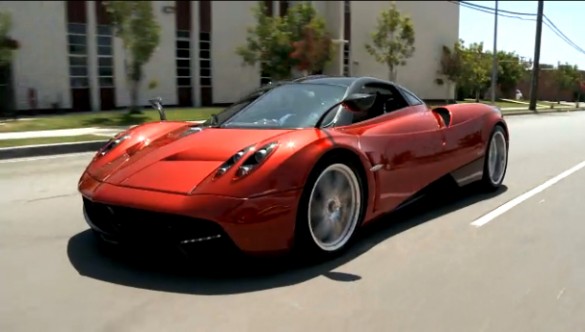 Horatio Pagani, like Leonardo da Vinci, blends both art and science in creating his masterpieces. Unlike da Vinci, Pagani’s art must meet government approval before it can be released to the masses, and that has a significant impact on his designs. You wouldn’t know it by looking at the Pagani Huayra, which could be the most stunning design in the automotive world today.

The Huayra was influenced by the “shape of the wind,” and by an airplane about to take flight. In a world of lowest cost parts and made-in-China components, the Huayra is a single-digit salute to conformity, and virtually every part in the car is made to Pagani’s borderline obsessive standards. The instruments dials , for example, are made by the same craftsmen that produce some of the finest watch faces in the world. Their cost? About $6,900 per set, compared to around $69 per set for conventional instrument faces.

Just in case that’s not detail-oriented enough for you, the Huayra uses some 1,200 titanium bolts throughout the car, and each one is stamped with the Pagani logo. Titanium thread is uses in the carbon fiber weave of the monocoque, just to make the car’s crash cell stronger. Nothing about the car was determined “too expensive” or “unnecessary” by an accounting department obsessed with the bottom line, and the Huayra may be the last car in the world built with zero compromise.That’s why the price tag is just north of $1.3 million, and the car appears to be worth every penny.

Unlike most episodes of Jay Leno’s Garage, Jay doesn’t drive the Huayra in the video below. Cost aside, the car is not yet street-legal in the United States, as it lacks advanced airbags. Pagani is working on a fix for U.S. customers, but Horatio Pagani himself was kind enough to give Jay Leno a ride in his new masterpiece. Enjoy the latest installment from Jay Leno’s Garage below.