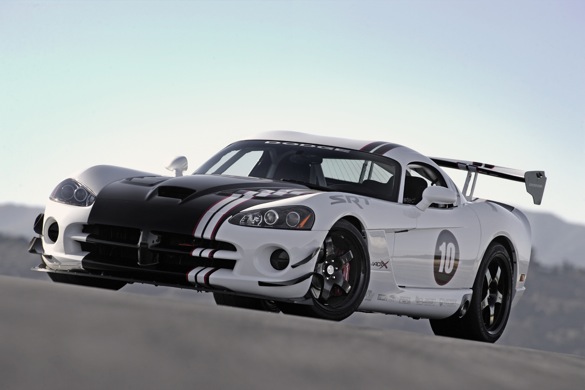 A Dodge Viper ACR-X, not the Viper ACR that set the record. Image: Chrysler Group

Just last week we brought you confirmation that a Lexus LFA, equipped with the Nürburgring package, had set a new lap record for a production car around Germany’s Green Hell. Prior to the LFA’s run, the record Nordschleife time, from bridge to gantry, was 7:18, set by a Porsche 911 GT2 RS on race tires. The Lexus managed a lap time of 7:14.64, easily beating the Porsche and even beating the boutique Donkervoort D8 RS by a few tenths of a second.

Not so fast, said Chrysler’s SRT group. Wanting to reclaim a position on the Nürburgring lap time list above the Corvette ZR1, SRT “borrowed” two new-old-stock 2010 Dodge Viper ACR’s from Tomball Dodge and shipped them to Mintgen Motosport in Germany for staging. It’s unclear if the cars were modified in any way, but this much is clear: according to SRT, one of the ACR Vipers turned a lap in 7:12.13, which is two and a half seconds faster than the $400k plus Lexus LFA.

There’s no video of the run just yet, but we’re sure it’s coming in the next few days. We’ll get it posted for you as soon as we can.