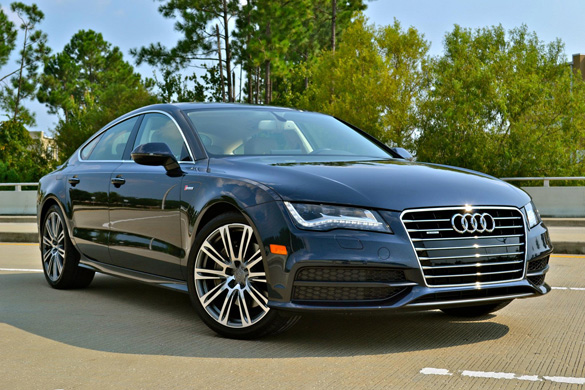 Audi continues to inject the automotive market with fresh products redefining their ultimate goal to dominate the luxury segment. With the introduction of an all-new 2012 A7, Audi cleverly introduces a vehicle to fit into both the wagon and luxury sports-sedan market and they do it well.

I had the chance to spend a full week in the new 2012 Audi A7 getting a true feel for what Audi pits against other coupe-like styled sedans such as the Benz CLS. Having the latest generation of Audi’s powerplants and proven Quattro all-wheel-drive technology, the new A7 drives like a vehicle much smaller and more powerful than the stats would represent on paper. 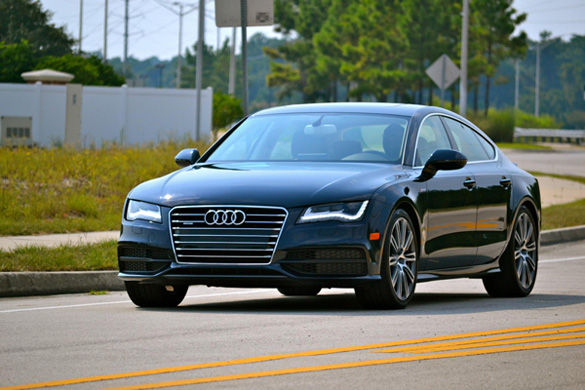 For its first year, the new 2012 Audi A7 bridges a gap between the A6 and full-size A8 incorporating a functional opening rear hatch. The low roofline and doors without a window frame give the A7 more or a stylish coupe aesthetic without compromising the interior space expected from a mid-sized luxury sedan.

The interior is truly laced with luxury all around. It features a special film on the windshield, microfiber trimmed panels, hydraulic damping elements on the axles, and a 0.30 coefficient of drag which all aid to provide a serene and quite cabin. 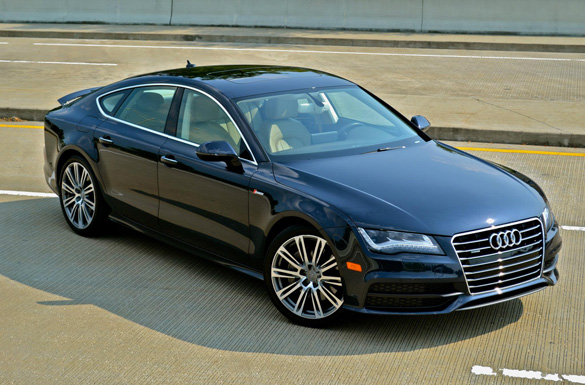 The copious use of aluminum throughout the new A7 contributes to weight savings without sacrificing rigidity. The doors, front fenders, hood and rear hatch are all composed of aluminum. Together, with a hybrid aluminum metal and high-end steel construction for the body, the A7’s body weighs 15% less than a comparable all-steel body would.

The front and rear seating areas are comfortable enough for tall adults where the rear passengers get to enjoy their own climate setting via the A7’s 3-zone automatic climate control system (two zones up front and one in the rear). The ambiance of the interior is taken a step further with adjustable white LED interior lighting and an optional Bang & Olufsen sound system. My test vehicle was equipped with the 14-speaker Bose sound system which sounds well enough to please the middle-weight audiophile. 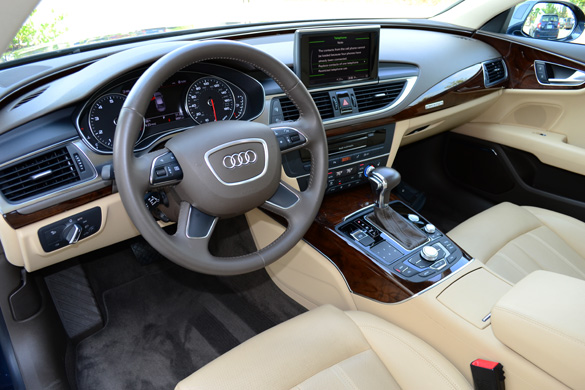 Techies will love the gadgetry in the all-new Audi A7 from the hard-drive based navigation system utilizing Google mapping technology to the Wi-Fi hotspot integration using 3G cellular data speeds. The Wi-Fi hotspot connectivity allows up to 8 devices enabling users to surf the web, check emails or even view/download videos.

The Google Earth mapping technology is simply astonishing giving the driver and passenger a true satellite ground representation of your position or destinations. This comes quite in handy in the event that you are referencing areas or points of interests in an unfamiliar place.  Even the Google Local search integration (light internet connectivity) via the 8-inch high-resolution pop-up LCD screen gives the driver or passenger updates for news, traffic, weather and gas prices. 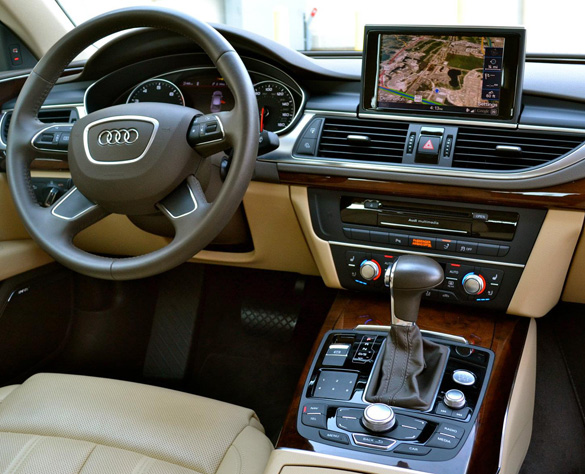 Audi’s MMI (Multimedia Interface) system is truly state-of-the-art leading the competition in vehicle integration of entertainment, accessibility and vehicle controls. Most vehicle controls and functions are within a touch of a single button and turn of the scroll wheel. Even an integrated touchpad allows you to navigate functions dependent on the specific menu or mode you are in. When compared to vehicle user interfaces found in other luxury brands, the Audi’s MMI system is comparable with a slight edge on user friendliness. Some may agree that the Audi MMI is much easier to use than any of BMW’s iDrive iterations.

Audi’s trademark LED daytime running lights glow in the day and night making the front of the new A7 unmistakably an Audi. A total of 18 LED lights make up the signature running lights while another set of 11 amber colored LEDs blink for the turn signals and 2 separate units makeup the optional LED headlights. Directional side LED lights illuminate depending on the steering wheel’s angle on A7’s equipped with the adaptive lighting system. Taillights get full LED illumination with integrated rear fog lights. 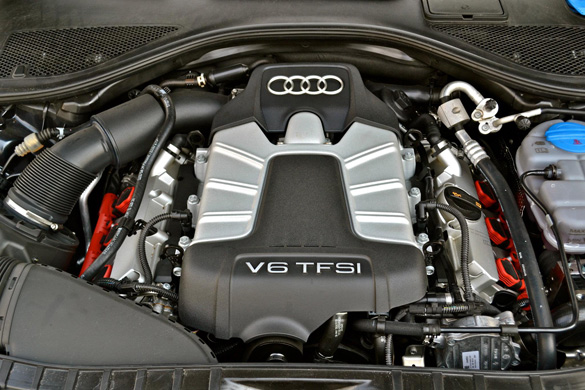 Powering the all-new A7 is Audi’s all-aluminum 3.0-liter TFSI supercharged V6 engine pumping out 310 horsepower and 325 pounds-feet of torque between 2900 and 4500 rpm. Despite tipping the scale at just over 4,200 pounds, the new A7 is no slouch making a dash to 60mph from a standstill in just 5.4 seconds. Much of the A7’s performance abilities are due to the supercharged V6 engine working in perfect harmony with the advanced 8-speed automatic transmission and Quattro all-wheel-drive. It is almost a match made in heaven especially when you are able to get an EPA estimated 18mpg city and 28mpg highway.

Driving the all-new 2012 Audi A7 gives the driver assurance at virtually any legal speed. Putting your right-foot down outside of the realm of legal speeds hardly ever constitutes any additional worry on the drivers part because the A7 is always surefooted and well dampened. Most of the my A7 test vehicle’s added agility was due to the optional sport tuned suspension lowering the vehicle about 0.39in from standard height and a larger wheel/tire combination. My A7 test vehicle was optioned out with the larger and rather stylish 20×9 inch wheels wrapped in 20-inch summer performance tires. The A7 gets 18×8 inch cast aluminum seven-spoke wheels as standard. 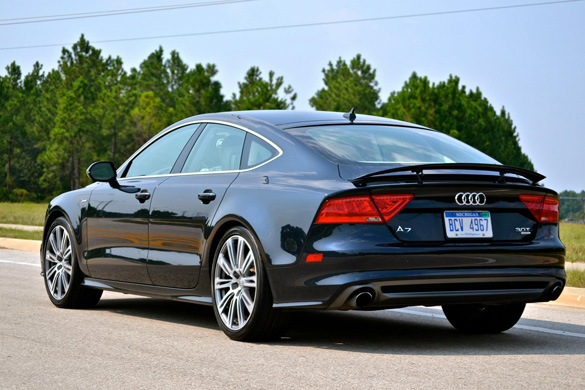 An integrated power rear spoiler is not just for show but acts as a functional mechanism automatically rising at speeds of 80mph or more for added stability. You may also manually raise the rear spoiler via a dashboard button.

Storage in the all-new Audi A7 is ample allowing you haul large objects just like you would in a mid-sized SUV. The power rear hatch comes in handy during those times that you have your hands full. I was able to fit an 8-foot tall wood 4×4 into the A7, which frankly took me by surprise. The A7 could easily be an excellent replacement for a gas-guzzling SUV. Not to mention, the added posh styling of the A7 would be another reason to leave your SUV in the garage or on the lot. 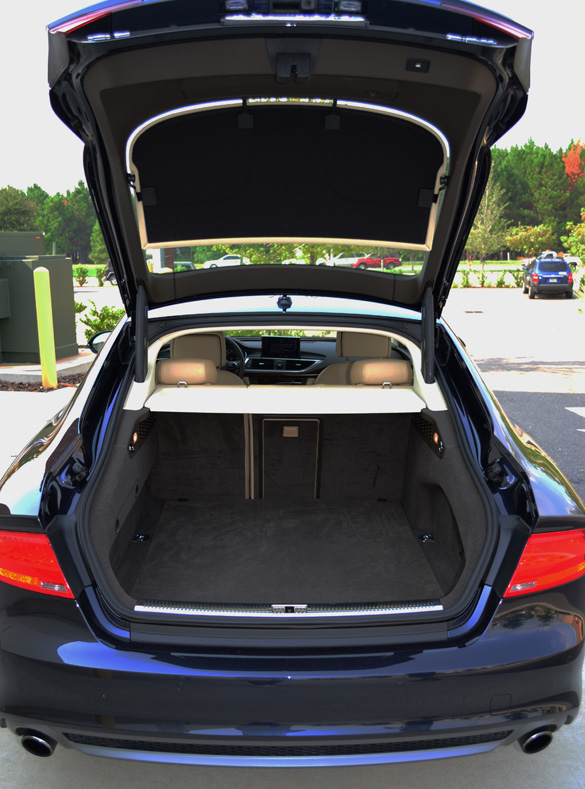 Safety has always been a primary focus for Audi and the all-new A7 continues to converge on several safety aspects for their passenger vehicles and pedestrians. An adaptive restraint system acts in conjunction with the Audi pre-sense safety system to manage airbags and seatbelt force limiters based on the height of the drive and front passenger. Optional night vision, knee airbags, outside rear seat airbags, adaptive cruise control with collision warning and Audi side assist (blind spot monitoring) all add to the over-all safety of the new A7.

My test 2012 Audi A7 came with the Prestige package, which includes 20 inch wheels/tires, front/rear parking sensors w/ rearview camera, 4-zone climate control, rear heated seats, front heated/cooled seats and Audi’s navigation plus with MMI touch. Loaded up in this configuration ads to the Base A7’s $59,250 price bringing it to $68,630.

Audi A7 Audi A7 Sportback