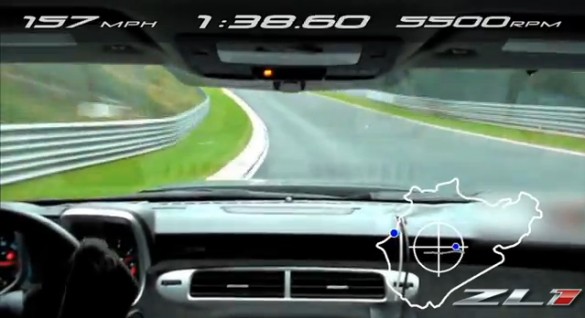 When Chevy’s engineers set the specs for the 2012 Camaro ZL1, this much was clear: they wanted the car to be fast around a track, not just in a straight line. When word came in that the car had lapped the Nürburgring Nordschleife in 7:41.27, it was pretty clear that they’d achieved their goals. The time puts the ZL1 on par with the latest Porsche 911 Turbo S, and just about seven-tenths of a second slower than the quasi-exotic Ford GT. It also makes the ZL1 faster than a 2009 Corvette ZR1, a Lamborghini Murcielago LP670-4 SV, an Audi R8 V-10 and a Pagani Zonda S.

Maybe the most impressive part of the video below is how hard GM test driver Aaron Link is working to go fast. There’s no denying that the ZL1 is still a big, heavy car, and it isn’t graceful on a tight and technically challenging circuit like the Nürburgring Nordschleife. Chevy calls the Camaro ZL1 used in the lap a “production intent” model, with no performance modifications added.

Link was pleased with the lap and impressed by the ZL1’s capability, saying, “One of the best moments is coming through ‘Fuchsröhre’, or Foxhole. The ZL1 accelerates at an unbelievable rate down through the tunnel of trees, and into a sweeping left-hand corner flat out in fifth gear. You have to have an extremely well-mannered, confidence-inspiring car to take any corner at 160 mph without lifting off the throttle – and the ZL1 was just brilliant.”