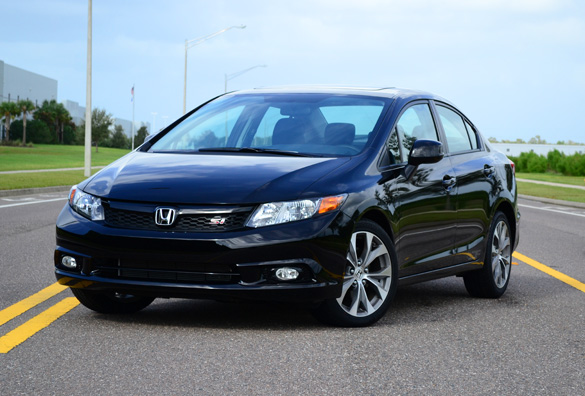 The all-new redesigned Honda Civic continues a tradition that has been instilled in the Japanese compact car segment for many decades now. The all-new Civic Si, the top-of-the-line performance oriented trim level for the Civic, aims to improve upon a formula with a bigger 2.4-liter engine under the hood of a style that has only been subtly changed.

I remember when the Civic Si made a big reemergence stateside back in 1999 after a hiatus from the Civic Si hatchback’s demise in 95’. Making a big splash with the B16A Dual Overhead Cam 4-banger engine and a 5-speed manual transmission to die for, the Civic Si was a dream for the so-called ‘street racer’ at the time. Now comes the all-new 2012 Civic Si with a 2.4-liter DOHC VTEC engine generating more power than all previous years, 201 horsepower at 7,000 rpm and 170 pound-feet of torque at 4,300 rpm. Horsepower is up about 4% while the torque is up 22% and available at a much lower rpm than the outgoing 2.0-liter powermill. This means you do not have to rev the Honda 4-banger to infinity before it generates some decent pulling power. 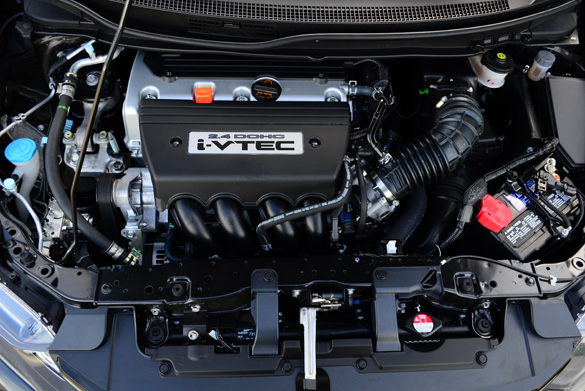 The new 2012 Civic Si is placed on a pedestal among other contenders when buyers are looking for that one trim level that outshines the rest in the performance arena. The Civic Si proudly wears its Si badge proving that it is king of all Civics. The Honda Civic entering into its 9th generation remains to be a benchmark for sport compacts but at the same time has created a very big shoe to keep filled. Others have attempted to fill the same shoe and have succeeded warranting a photo finish right next to the Civic.

The all-new 2012 Honda Civic Si is a much-improved vehicle over its predecessor. At the heart of the new Civic Si is a much-needed powerplant improvement for the sake of Honda’s sporty compact car evolution. Unfortunately that growth fails to evolve much in other areas such as the new 2012 Civic Si’s styling. For 2012 the Civic’s styling receives only minor changes where onlookers and even some enthusiasts have a hard time differentiating the older Civic from the new 2012 model. Moreover, interior bits have only been freshened up a bit stretching the idea that the new Civic is really something “new”. 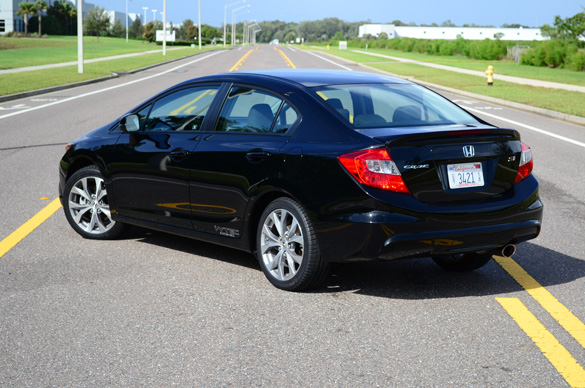 Despite the new Civic lacking a full redesign in the eyes of consumers, the new 2012 Civic Si still embodies basic Honda performance principles. For one, the new Civic Si still screams especially during the i-VTEC rpm levels from 5000 rpm to just over 7000 rpm. The dashboard cluster VTEC indicator comes in stages alerting the driver of VTEC engagement. The butter-smooth 6-speed manual transmission is direct and precise which allowed me to easily and quickly row through the gears like it was second nature next to breathing. The clutch is a bit soft but gives you just enough feedback to quickly land each gear and easily rev-match downshifts. It was never any doubt that I was driving a Honda even if I was blindfolded. 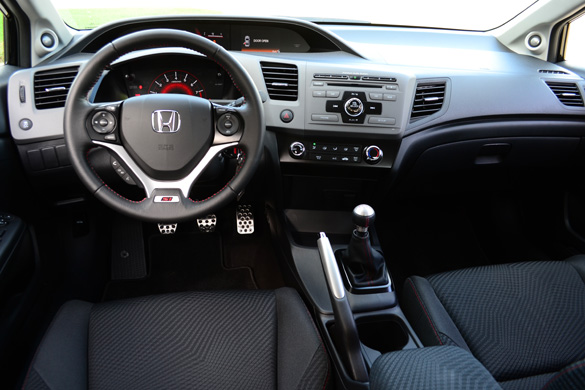 Performing several hard acceleration runs in my Civic Si sedan test vehicle I was able to make a best 0-60mph time of 6.8 seconds. Although that isn’t anything near exotic car speeds, the Civic Si at least keeps up with the VW GTI and Mini Cooper S.  The new Civic Si’s handling abilities are slightly improved thanks to higher spring rates and firmer dampening than previous generations. The electric steering rack is rather competent with good feedback possibly thanks to the limited slip differential. 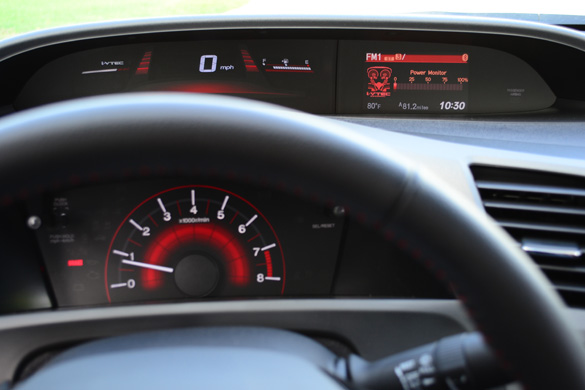 Inside of the all-new 2012 Civic Si is a cabin sometimes invaded with the buzz of the 4-cylinder engine but provides plenty of comfortable space for even tall adults. The front seating positioning is excellent giving the driver good visibility while properly sitting upright in the sport bucket seats. Dashboard controls take a bit to get used to with the tachometer being separated from the mph and information LCD displays. For instance, having the tachometer in the center, but mounted lower than the rest of the cluster, is ideally logical but takes a while to get fully accustomed to. Navigating the information LCD is quite entertaining while at the same time can be cumbersome figuring out if the steering wheel mounted controls will toggle to different screens. Once everything is all figured out, the information LCD screen proves to be somewhat beneficial with the exception of the power meter, which seems to be a gimmick if you are not in full VTEC rpm levels. 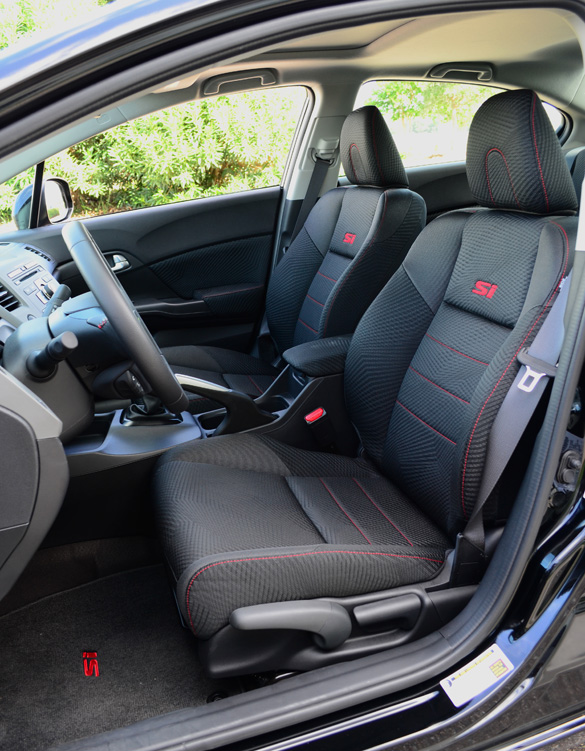 Advanced safety features are a common expectation in virtually all vehicles sold now days. The new 2012 Civic Si incorporates all of the expected safety features as well as an enthusiast praised stability control system, which is one of the least intrusive systems that I have experienced in a compact vehicle. The stability control lets the Civic Si slip out and front wheels spin for a second or two before stepping in. With the added torque of the new Civic Si, one would actually want the stability control to allow you to have a little fun. The new Civic Si is actually a blast to drive around town especially when you have more low-end power to utilize from the larger VTEC-screaming 2.4-liter engine. 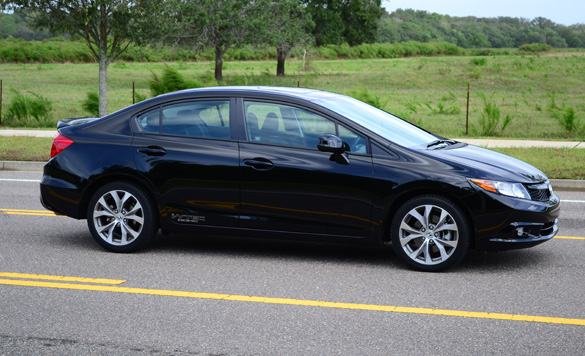 The new Honda Civic Si undoubtedly has a stiff competition. At one time the Civic Si dominated its segment for those wanting a bit more performance out of their sport compact vehicle. For 2012, the all-new Civic Si has become a secondary choice instead of the obvious pick of the bunch. With that said, the more powerful 2012 Civic Si is still a viable choice for the sport compact car enthusiast even if it has not set any new obvious aesthetic trends in its latest redesign.