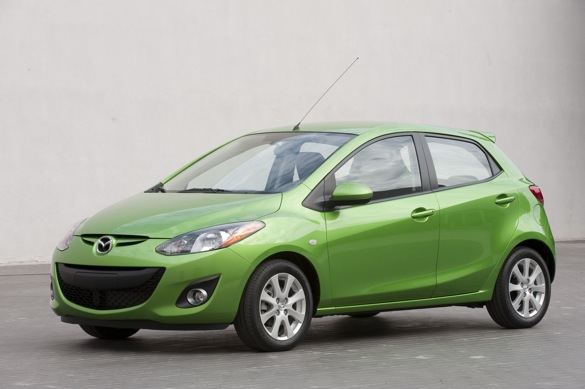 When it comes to the current batch of minicars available in the United States, the Mazda2 is among the most entertaining to drive. Like all things Mazda, the car handles better than you expect it to, belying its economy car roots. In fact, the Mazda2 wants to be driven hard, and like the Mazda MX-5 Miata, rewards drivers who know to carry speed into corners. With modest horsepower, preserving momentum is the key to good lap times.

Maybe that’s a politically correct way of saying that the Mazda2 needs more power. Acceleration from 1.5-liter, 100 horsepower four-banger is modest at best, although no worse than it was from the old Mazda Protege with the base engine. Proof that more power in the Mazda2 is a good thing can be had by watching videos of a “Mazdaspeed2” entered into this year’s One Lap of America. Equipped with a tuned Mazdaspeed3 engine good for around 300 horsepower, the car was unbelievably quick and capable of impressive lap times.

Since it was a privateer effort, and not a factory-backed build, mechanical problems limited the car to a 42nd place finish in this year’s One Lap. The car drew crowds at every event, often accompanied by comments like, “Mazda should build this,” or “where can I buy one?”

Now comes word, via Left Lane News, that Mazda itself is working on a 2013 Mazda2 Turbo. We won’t call it a Mazdaspeed2, since it’s way to early to speculate on whether the car will get the full Mazdaspeed treatment. Tuners are getting up to 160 horsepower from the current Mazda2 via the addition of turbos, software, intake and exhaust, but don’t expect Mazda to push a car with a factory warranty that hard. Even 140 horsepower would be a 40 percent jump in output, and it would certainly add to the Mazda2’s entertainment value.

There’s no word yet on when or if the car, expected to debut at this year’s SEMA show, will see production. We’ve got our fingers crossed.