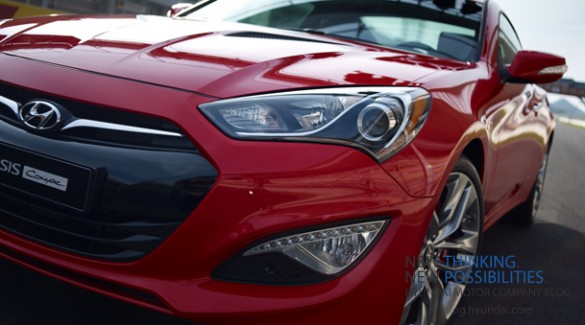 Looking to build anticipation for the upcoming release of the 2013 Hyundai Genesis Coupe, the Korean automaker posted front and rear teaser shots of the new Genesis Coupe on its own Korean language blog. The “official” shots back up the leaked images we’ve been seeing, and confirm that the new Genesis Coupe will wear the now-familiar hexagonal grille.

We’re seeing some “fluidic sculpture” influences in the new design as well, and that’s not a bad thing since we’re fans of Hyundai’s latest style. To give credit where it’s do, the Genesis Coupe really isn’t a styling derivative of anything else on the market. 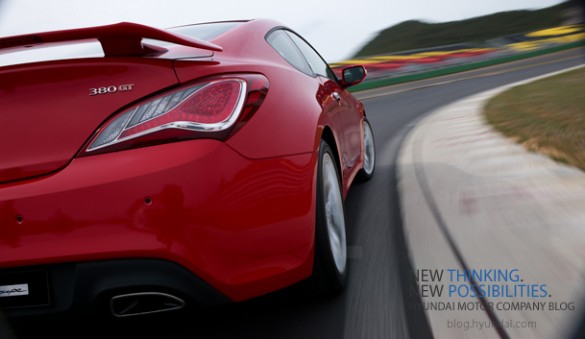 We expect to see more power from both the 2.0-liter turbo and 3.8-liter variants, although Hyundai hasn’t released details just yet. We seriously doubt that the Coupe will get the same 5.0-liter V-8 used in the Genesis R-Spec sedan (and in the RM500 SEMA show car), but we wouldn’t be surprised at all if Hyundai announced a supercharged version of its 3.8-liter V-6.

The Hurricane SC SEMA show car had a blown 3.8-liter V6, good for 450 horsepower. If a supercharged Genesis Coupe does see production, we’d expect it to be a bit more conservative, probably coming in around 400 horsepower or so. That’s just a guess, and we’ll have to wait until the North American International Auto Show for Hyundai to tell us what’s powering the 2013 Genesis Coupe.