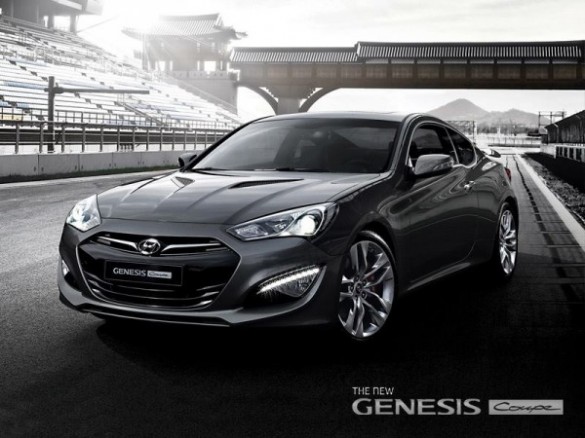 Hyundai’s 2012 Genesis Coupe won’t officially debut for another six weeks (at January’s Detroit Auto Show), but the Korean automaker chose to reveal details of the car’s powertrain options at last weekend’s Korea Speed Festival in Yeongam, Korea. As expected, both the 2.0-liter turbo engine and the normally aspirated 3.8-liter V-6 are getting more grunt, which should result in a substantial performance improvement for the the new two-door Genesis. Also as expected, there won’t be a V-8 option, and there isn’t any word on a supercharged V-6 option yet, either.

The 2012 Genesis Coupe 2.0Twill now make 275 horsepower and 274 lb.-ft. of torque, up from 210 horsepower and 223 lb.-ft. in the outgoing model. The additional power comes courtesy of a larger, twin-scroll turbocharger and a beefed-up intercooler, and the 2.0T can be ordered with either a six-speed manual transmission or a new eight-speed automatic.

Genesis Coupe 3.8 models will come with 350 horsepower and 295 lb.-ft. of torque for 2012, according to Left Lane News. That’s a gain of 43 horsepower and 29 lb.-ft. of torque from the outgoing V-6 models, and the gains come largely from a switch to direct injection on the new engine. Like it’s four-cylinder sibling, the Genesis Coupe 3.8 will be available with either a six-speed manual or an eight-speed automatic gearbox.

Also new for 2012 is a “sound generator,” which Hyundai says will transform the Genesis Coupe’s engine note into a “classy and sporty” sound. If it’s anything like the sound generator used on the Ford Mustang (and formerly on the VW GTI, it’s nothing more than a plastic tube piping engine noise through the firewall into the cabin. In other words, don’t expect anything too high-tech.

Look for more info on the new Genesis Coupe models in January, at the start of the Detroit Auto Show.