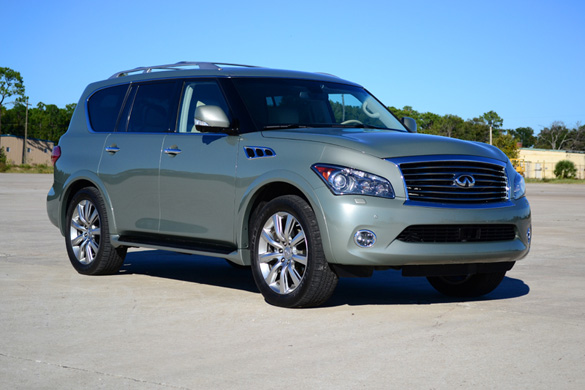 Before the unprecedented rise of gas prices, the SUV segment had a plethora of potential buyers. In the past few years consumers have taken to smaller vehicles and car-based SUVs (crossovers). The decision to switch to a smaller vehicle leaves only a few choices remaining if you want a powerful, roomy and luxurious SUV. One choice that remains to steal the heart of large SUV buyers is the new 2011 Infiniti QX56.

Infiniti has continued to offer a large SUV despite the slowing sales during upswings of gas prices. Although their decision is not solely reliant on gas prices, there are only a few available frame-on-body SUVs left to roam the earth. The 2011 Infinity QX56 is a complete redesign from the outgoing 2010 model. New innovations have kept the QX-mammoth alive instead of going the way of extinct frame-on-body vehicles. With better handling, improved fuel economy and luxury refinement, the QX56 has managed to take a distinguished road, which appeals to consumers who live the up-sized lifestyle. 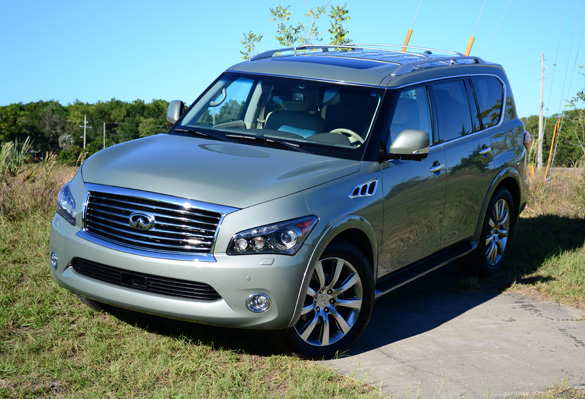 Traditionally Infiniti vehicles are well endowed in the technology game with new innovations such as distance control assist, lane departure warning/intervention, blind-spot warning, and even a hydraulic Body Motion Control System. All of these techie features are available on the new 2011 Infiniti QX56 taking safety and comfort to new heights.

My new 2011 Infiniti QX56 4WD test vehicle was equipped with several options including the Deluxe Touring Package, Technology Package, Theater Package and large 22-inch wheel package. Opting for a QX56 with the Deluxe Touring Package gets you climate-controlled front seats, Mocha Burl Trim, Remote tip-up third row seats, semi-aniline leather-appointed seating and Hydraulic Body Motion Control, and 22-inch wheels and tires. The large 22-inch wheels/tires add to the stability and handling of the QX56 but may prove to give somewhat of a harsh ride when compared to the standard 20-inch wheels and tires. The Hydraulic Body Motion control does a great job to keep the body of the big QX56 from rocking and rolling especially at highway speeds.  The overall objective of the body motion control system is to prevent occupants from getting carsick. Additionally, it provides extra handling capabilities keeping the body level in corners by increasing hydraulic pressure to the outer dampers. 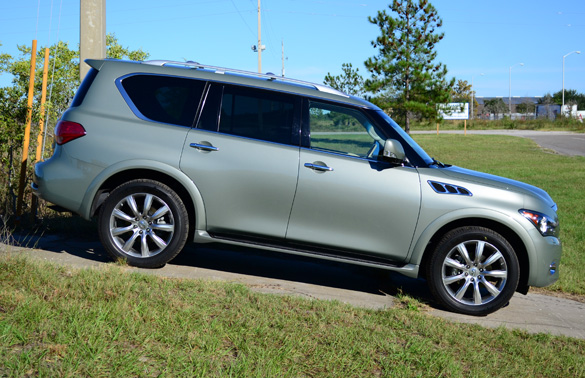 There is no denying the mass of the QX56 but somehow Infiniti manages to give the driver the ability to navigate a nearly 6,000 pound vehicle as you would any large car. The beefy 5.6-liter V8 engine produces a healthy 400 horsepower and 413 pound-feet of torque through a competent 7-speed automatic transmission. Manual shift control with rev-matched downshifts is standards giving a properly equipped QX56 4WD model the ability to tow up to 8,500 pounds. Without any extra dead weight in tow, the QX56 is able to run from 0 to 60mph in 6.8 seconds which is quick for such a big vehicle.

For this type of performance from a large SUV expect to pay dearly at the gas pump. My 2011 QX56 tester averaged 15.5 mpg. EPA estimates for the QX56 are 14mpg city and 20mpg highway. I could never get the EPA highway estimate of 20mpg even when attempting to perform my version of hyper-milling. 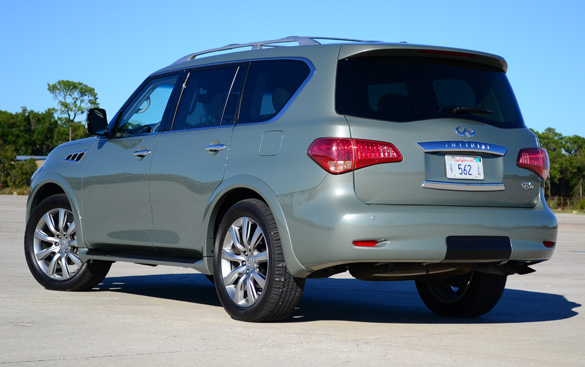 Parking the QX56 can be an easy task provided you are utilizing Infiniti’s remarkable around-view monitor system. The around-view system uses a series of 4 cameras mounted in the front, rear and under the review-side mirrors. All-together these wide-angle cameras compile a usable vehicle-placement image in a virtual 360 degree view of ‘around the car’. When compared to a smaller crossover vehicle, the system proves to be exceptionally beneficial for the QX56 when its added mass is factored in. Visibility is already good with plenty of side and rear window real-estate. The blind-spot warning system proves to be valuable when you have a full-house of occupants in the rear of the QX56. It gives you peace of mind when switching lanes, knowing that your blind spot is clear. In the event that a vehicle is in your blind spot and you use your turn signal, the system will sound an audible warning and flash the indicator. 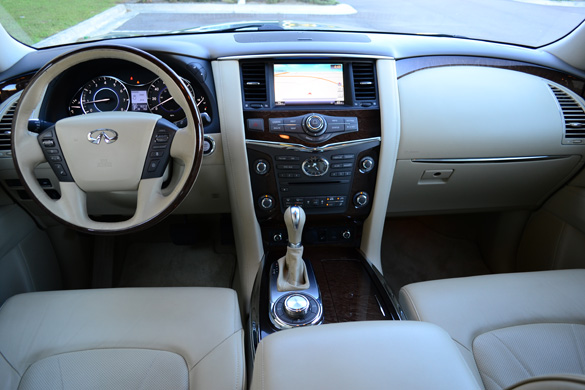 The new Infiniti QX56 is all about giving the driver and all other passengers a temporary stay in the lap of luxury. The seating appointments are the best in its class considering you have a choice of an 8 seating configuration with a split 2nd row bench or a 7-passenger setup with two captain’s chairs. The 3rd row is exceptionally easy to get into but is somewhat cramped when you have two other adults just as tall as me sitting side-by-side. Up front and in the 2nd row you have more than enough space for virtually anyone no matter how big or small.

The rear cargo area is a breeze to configure for large items by using the power-fold seat buttons. The power rear lift gate is user-friendly with innovative pinch-detection weather strips that will automatically reverse the lift gate when closing if an object is sensed. 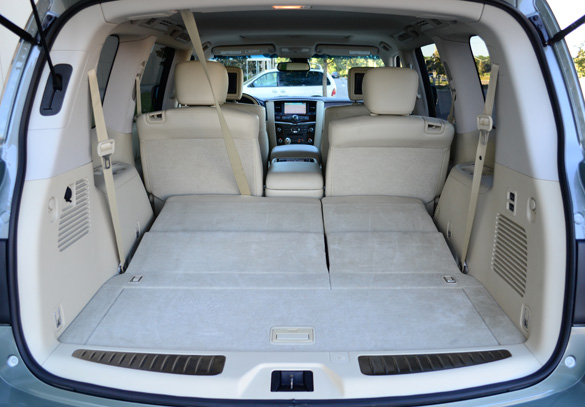 Exterior styling on the new 2011 QX56 is a big deportation from the outgoing 2010 model as well as the Nissan Armada that the previous generation QX56 was derived from. For the new 2011 QX56, the design and mechanics share very little with the Armada. Some will agree that the exterior styling of the new 2011 Infiniti QX56 can be summed up as “different” and “unique.” It is not much denying that the new QX56 has its own style that has a few characteristics from other Infiniti models. Either way, in the case of the QX56, beauty is in the eye of the beholder. We will leave it as that. 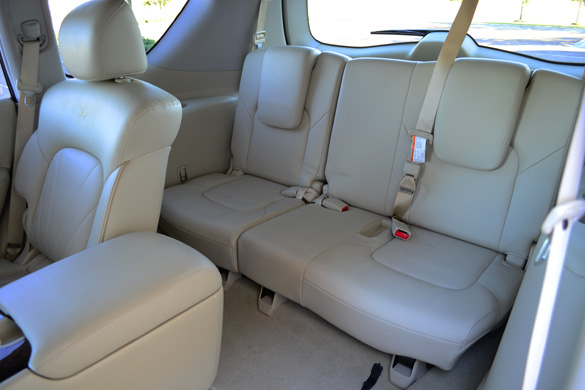 Over-all the new 2011 Infiniti QX56 is a better Cadillac Escalade. Those in the market for a body-on-frame luxury SUV do not have many choices but they would not want to pass the QX56 by. A starting price of just over $59,000 for a new QX56 makes for an attractive buy. Loaded up to the gills with all of the tech gadgetry and 22-inch rollers expect to pay north of $75,000.