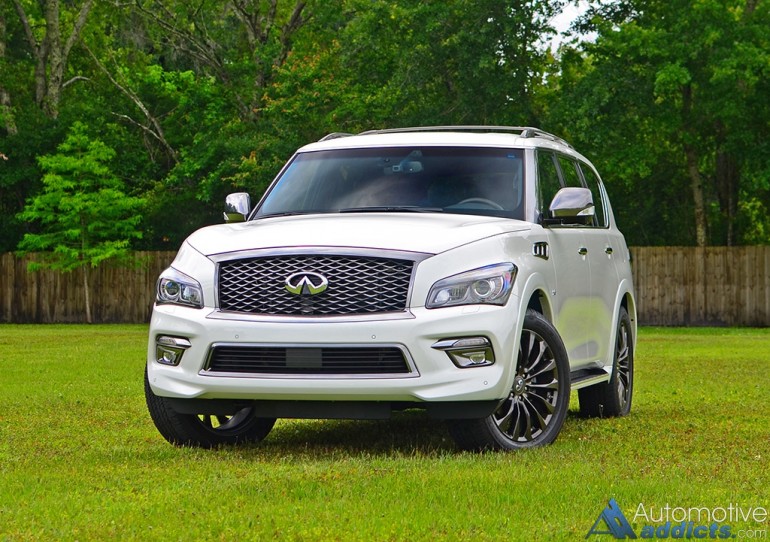 Infiniti has been known for offering one the few available body-on-frame SUVs on the market. In the niche segment, there are buyers who seek characteristics only found in large SUVs, which cannot be replicated within most crossover utility vehicles. Infiniti’s long standing in giving those consumers exactly what they want has reached a pinnacle of rubbing elbows with the linking’s of the Cadillac Escalade in a premium luxury full-sized SUV. 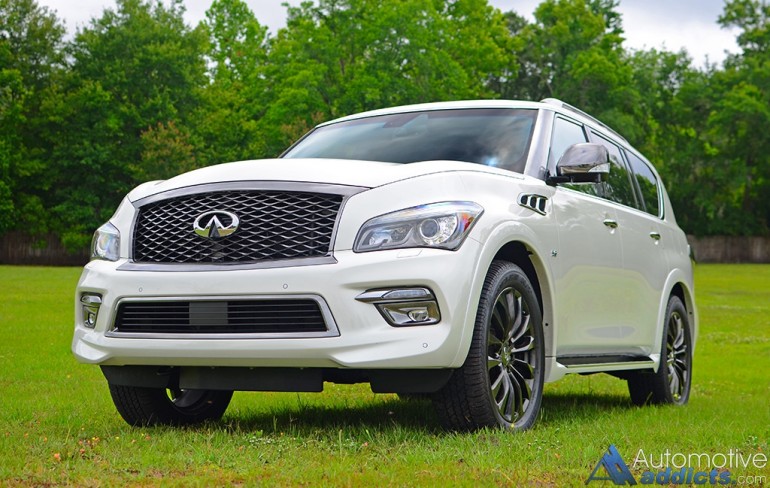 In my view, the latest Infiniti QX80 is the definitive Japanese Escalade, a vehicle in my test vehicle’s top-level and exclusive AWD Limited trim puts forth the best of the Infiniti brand’s efforts for luxury appointments, massively large interior proportions, and generous amounts of their long-touted Inspired Performance. 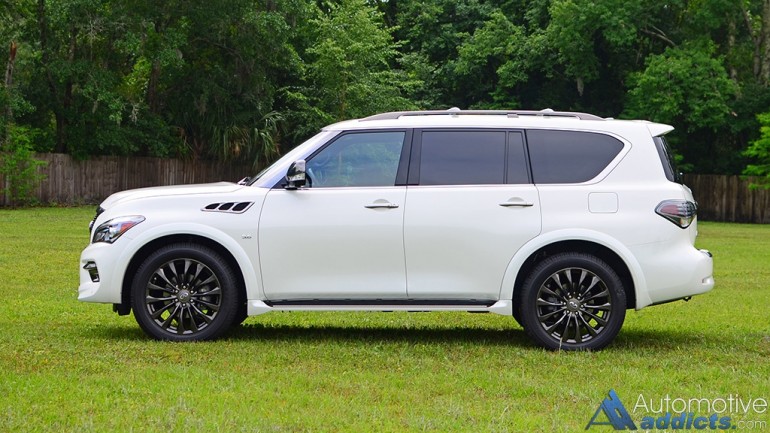 With a limited number of examples produced for the current model year in the exclusive Limited trim, the 2016 Infiniti QX80 Limited edition reaches a new height for what is considered as the largest body-on-frame SUV you can buy outside of the few domestic long wheelbase variations from the General. The ample interior volume (169.1 cubic feet) and mammoth-like body size, the QX80 is a literal statement rolling on 22-inch wheels. 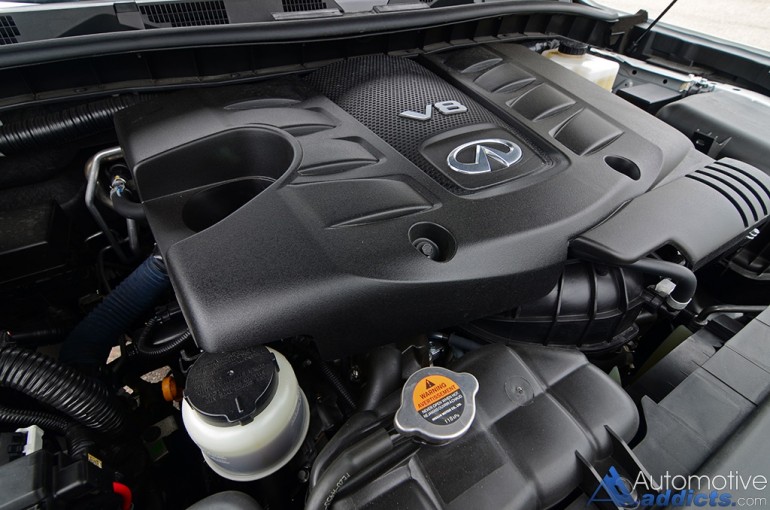 Handling the large mass that the QX80 is, all models get a proven 5.6-liter V8 engine with 400 horsepower and 413 lb-ft of torque. On my top-trim QX80 AWD Limited test vehicle, power can be sent to all four wheels in a high/normal gearing or a Low drive mode by a turn of the large selector turn knob behind the gear shifter. Naturally, most owners of the QX80 AWD will never see the light of rough or off-roading terrain. Therefore, the low gearing mode selection is there for nothing more than decoration or bragging rights in most cases. However, the ruggedness wrapped up in a supple leather-appointed package hides underneath the QX80’s bubbly and overbearing aluminum body panels. 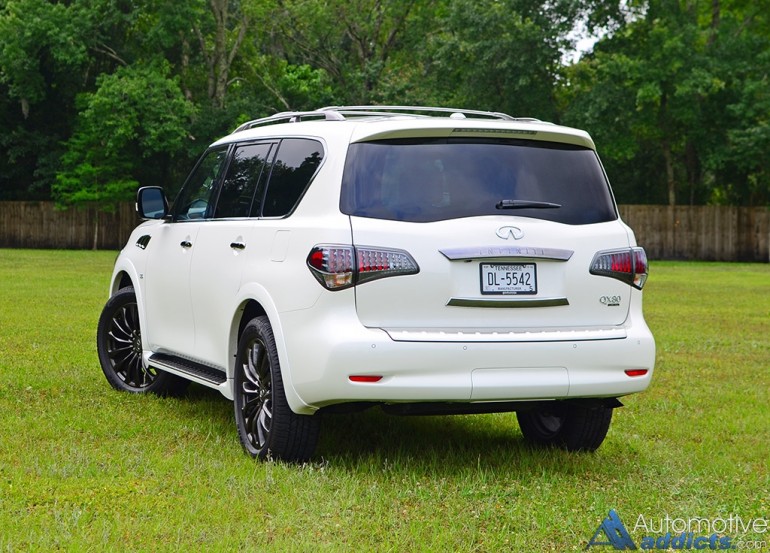 Uncovering the massive chassis and its capabilities you will find a decent riding vehicle that’s relatively easy to maneuver despite its size. Parking the QX80 is somewhat easy thanks to a 360-degree surround view camera system, even if it takes you an extra 30 seconds to double check your surroundings because it feels like your parking a small house. On the road, the QX80 remains smooth and doesn’t exhibit the body jiggle as you go over bumps that you get from some of its direct competition’s suspension systems and large 22-inch wheel packages. Even though the ride may have a bit of initial impact due to the large 22-inch wheels, the QX80 AWD Limited has a decent ride quality, probably only to be outdone by the Lexus LX 570 and Mercedes-Benz GLS-class.

The beefy 5.6-liter V8 does its job to propel the QX80 to 60 mph in just 6.5 seconds while the tried-and-true 7-speed transmission smoothly selects each gear without any fumbling through the cogs on downshifts. The handling of the QX80, despite its tall stature, inspires just enough confidence and feedback to communicate times where you may be reaching its limit before stability control starts to kick in to keep the QX80 in line and any of the numerous airbags from deploying. 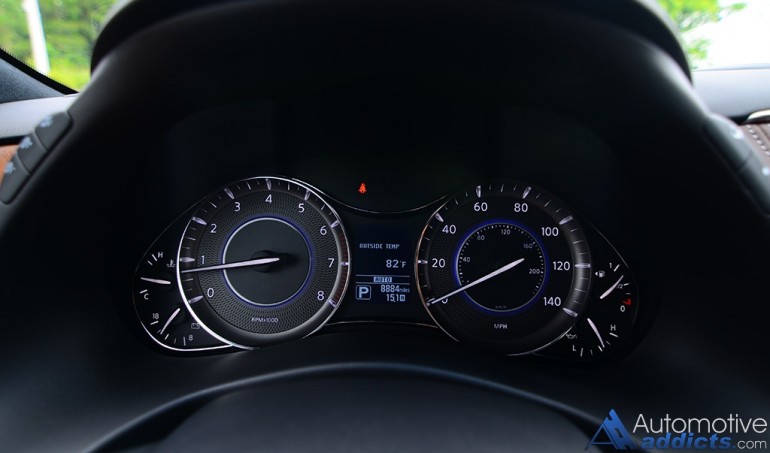 Power delivery is effortless, and the QX80 is eager to get out of the way from a light press of the sensitive gas pedal. Moving the QX80 along has certain consequences in the area of using copious amounts of premium fuel. It’s no secret; the QX80 is a thirsty beast. The EPA estimated fuel consumption of 13 mpg city, 19 mpg highway, and 15 mpg combined are far from impressive. I was only able to get 17.9 mpg on the highway and often averaging around 15.9 mpg while in the city I saw a steady 13.8 mpg. Fortunately, there is a 26-gallon gas tank for a highway cruising range of up to 494 miles, if you are able to hypermill out that elusive 19 mpg figure.

The usefulness of the 2016 Infiniti QX80 AWD Limited is the collective of its cabin and what it offers regarding its sheer size, luxurious seating appointments for seven, towing up to 8.500 pounds, and ample cargo area. With that, the QX80 AWD Limited has a plush interior starting with its Truffle brown semi-aniline leather seats with unique quilting and perforation. 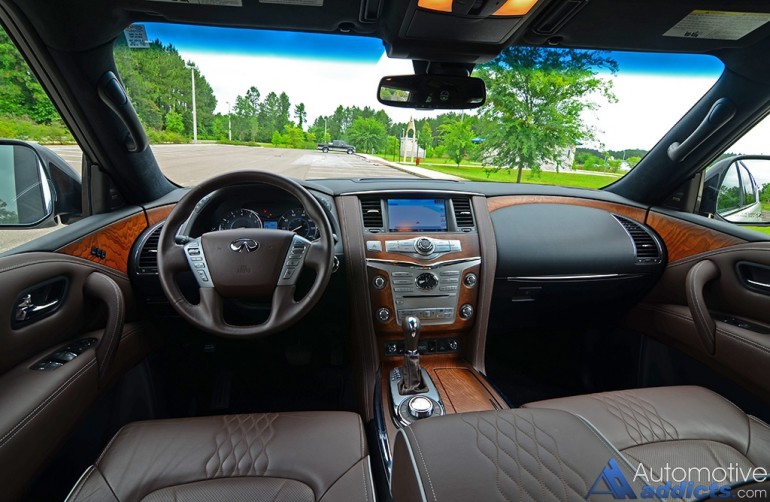 The exclusive Limited edition of the QX80 sets itself apart from the other two trims, the base model, and the Signature Edition. The QX80 AWD Limited gets unique dark chrome exterior trim, open poor matte finish ash wood trim, Truffle Brown leather seating, and darkened 22-inch wheels all on top of the features included in the QX80 AWD Signature Edition trim level. 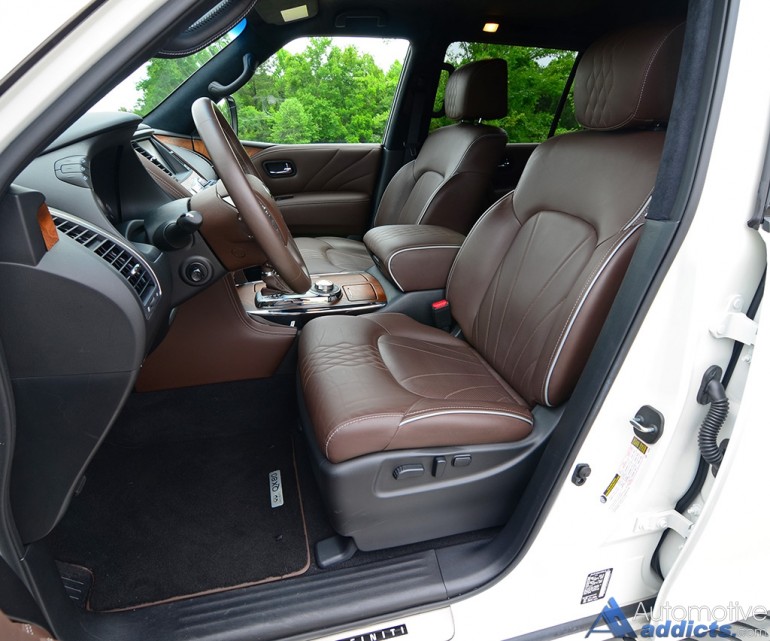 The front seats don’t have much lateral support but do have ventilation, heating and 10-way power adjustments with 2-way lumbar support. The second-row seating, two seats with a center console, have heating and separate second-row climate controls. Out back, the third-row fits up three but is short on overall space and rather cramped with limited legroom that’s more reserved for children or small-statured adults. The third-row seats have a power seat back adjustment, which can be used to fold the seats flat on the floor to open up cargo space. Additionally, the second-row seats can be folded down for cargo space or folded forward through an unlatching spring action for easy access to the third-row. To top it all off, the airy cabin and cargo area that can open up to a vast 95.1 cubic feet of storage area are part of the nearly untouchable benefits of the Infiniti QX80. 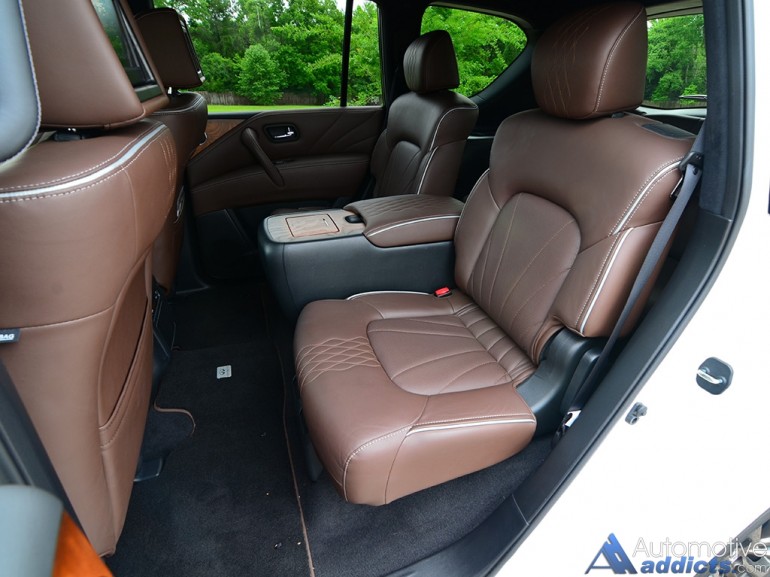 At the forefront of utilizing today’s advanced technology, the Infiniti QX80 AWD Limited includes many active safety features, such as blind spot warning with intervention, backup collision intervention, predictive forward collision warning, forward emergency braking, and lane departure warning with prevention. A 15-speaker Bose audio system has excellent clarity and fills the vast cabin with pleasant tones. The traditional infotainment system from Infiniti touts a familiar and proven user-friendly interface that hasn’t deviated much from where it first started many years ago. 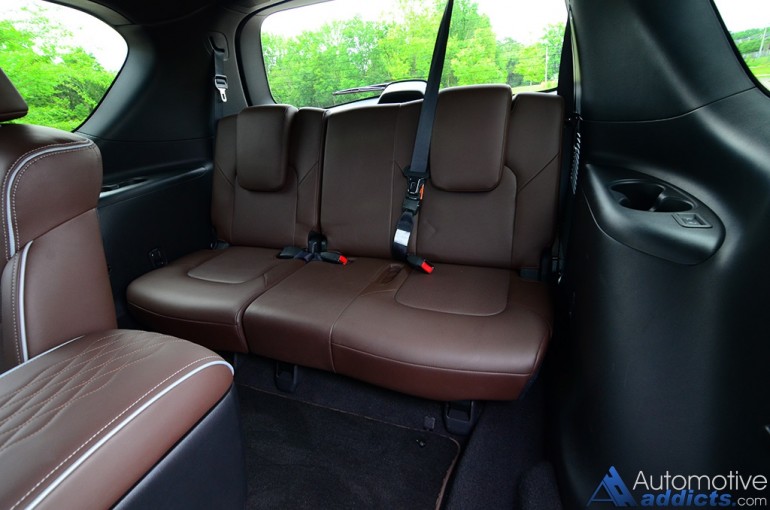 The totality of what the Infiniti QX80 offers in its top-level AWD Limited trim places it as a viable alternative for those looking at the short list of well-endowed direct competition. The price point, much in line with other body-on-frame SUV offerings, comes as no surprise due to the substantial equipment list, massive size, and appealing luxury encased in a large cabin that has soft touch surfaces and premium materials throughout. My loaded up 2016 Infiniti QX80 AWD Limited comes to an as-tested price of $89,845, which includes a $995 destination charge – the stately price for a luxury land yacht. It’s also prudent to mention that the 2016 Infiniti QX80 2WD in its base trim starts at just $64,245, which makes it an exceptionally attractive buy for such a large three-row eight passenger SUV that’s and decently stocked up on standard features. 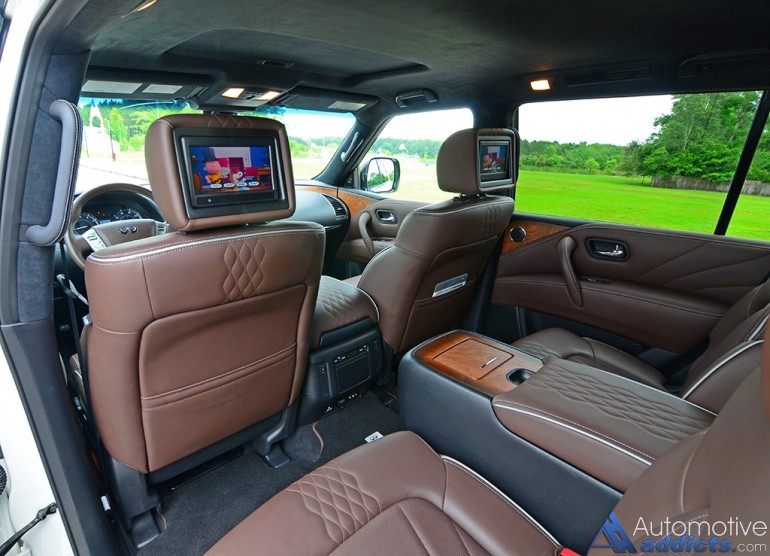