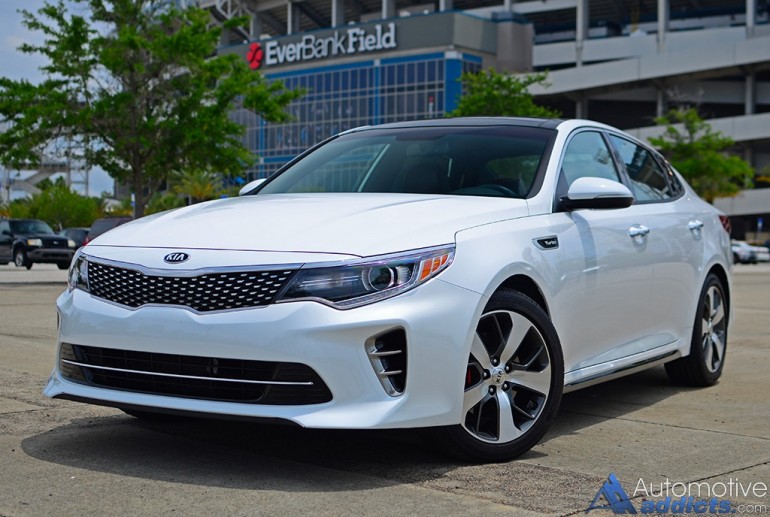 The automotive industry is undoubtedly evolving at a fast pace and at the same time many consider the current state to be a golden era where technology is literally taking the driver’s seat. In the many coveted and highly competitive segments, the midsized sedan category is battling to keep its prominence among the growing favoritism of compact and midsized crossover utility vehicles. Kia has embarked on a journey to have progressive thinking when it comes to their prided Optima midsized sedan, which is redesigned for the 2016 model year. 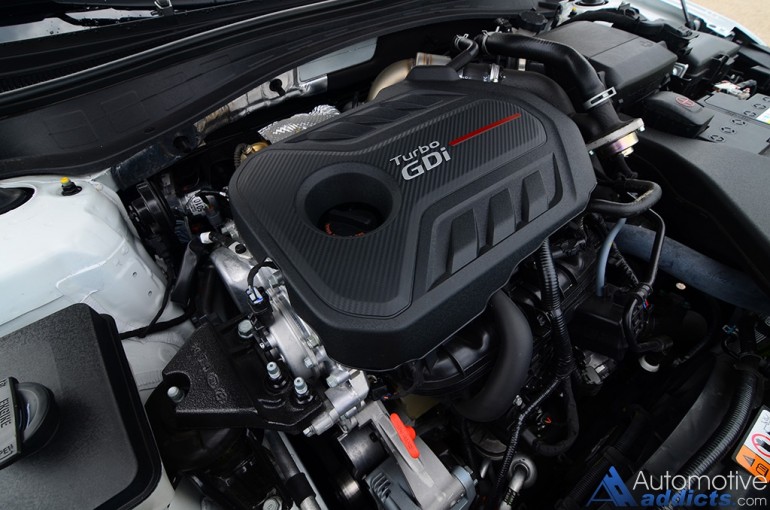 Power from the 2.0-Turbo proves to be comparable for the class of vehicle getting the new Optima up to 60 mph in 6.7 seconds. While falling slightly short of mainstream midsized sedan competition equipped with the top-trim-level powertrains, the Kia Optima SX Turbo retains an admirable effort for performance. The transmission goes a decent job to keep the turbocharged engine revving through its peak power rpm performing smooth up and downshifts without hesitation. The power comes on with only a slight lag, nothing to diminish confidence for jumping into traffic. 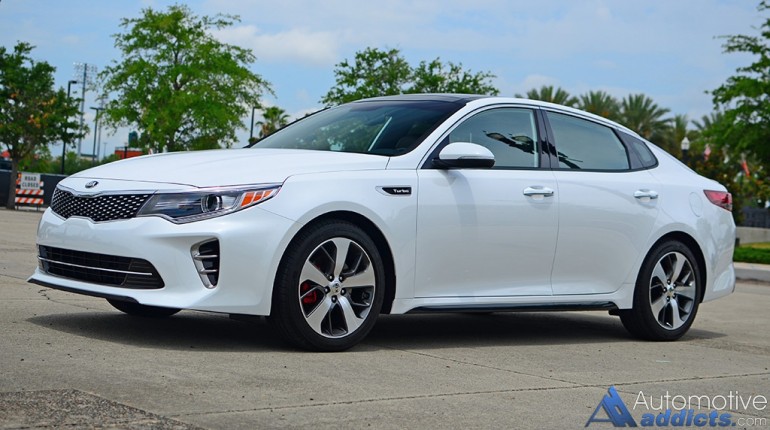 Power sent to the front wheels is smooth with hardly any torque steer. The steering effort from the electric-assisted rack, mostly numb and absent of any realistic feel in both the Normal and Sport drive modes. To add insult to injury, Sport drive mode adds an abundant amount of effort to the steering but proves to be entirely artificial in its feel, somewhat like an antiquated force-feedback steering wheel designed for the original PlayStation. 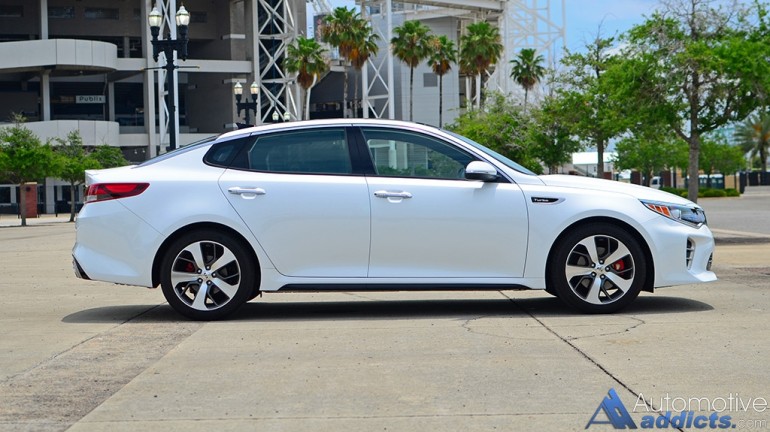 Making up for the lack of natural steering feel is the decent ride quality of the new 2016 Optima with a respectable balance of comfort and the stability of the SX and SXL’s sport-tuned suspension setup. Braking performance is also admirable and confident inspiring when coming to a stop from legal road speeds. Pushing the new 2016 Kia Optima hard it tends to react well to sudden transitions laterally.

Fuel efficiency on my new Optima SX Turbo is on par with what you get in other top-level trim midsized sedan competition. EPA estimates for my Optima SX Turbo, at 22 mpg city, 32 mpg highway, and 25 mpg combined, are consistent and easily attainable. Better yet, during my 300-mile trip I was able to get about 34.2 mpg on average beating the EPA estimates. Moreover, city mileage was slightly better than the estimates with me getting 22.8 mpg in heavy stop-and-go traffic. 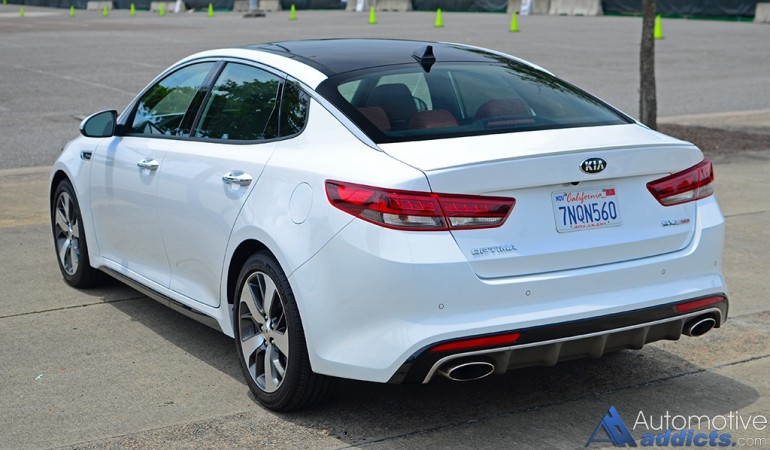 Kia, with its not-so-distant Hyundai counterparts, have come a long way to making a reputable nameplate for themselves in the automotive industry. The new Kia Optima is proof of the Korean brands making headway in build quality, reliability, and comfort. The interior of the new Kia Optima exhibits these characteristics with decent fit and finish throughout, with many soft-touch surfaces to play on an even keel with its direct competition. 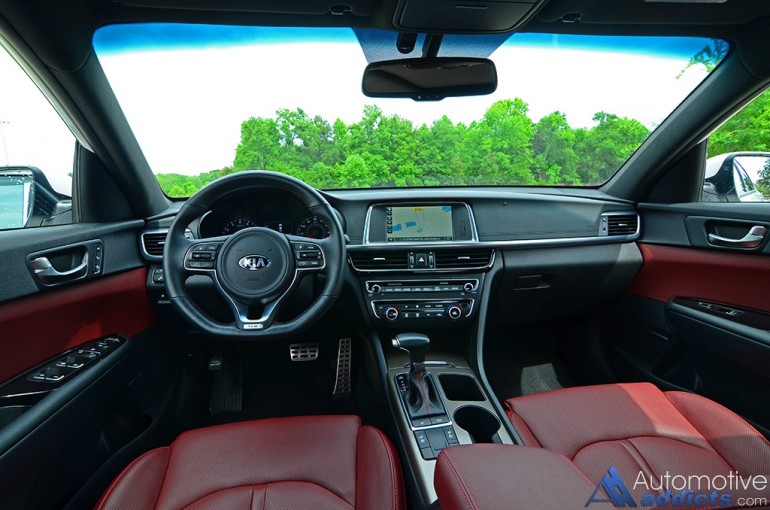 The reworked dashboard is mostly soft touch with a limited amount of hard plastics below the beltline. Door trim is all soft touch on the areas where you touch with nicely contrasted colors choices instead of actual plastic trim pieces that attempt to emulate metal or wood. The simplistic nature of the cabin in the new Kia Optima conforms to an enjoyable tone where Kia doesn’t play the pretend game. Found in my Optima SX Turbo test vehicle, were perforated leather seats with heating and ventilation on the front seats and heated outboard rear seats. The seats proved to be slightly on the harder side but did provide support in just the right areas as to avoid fatigue on long trips. 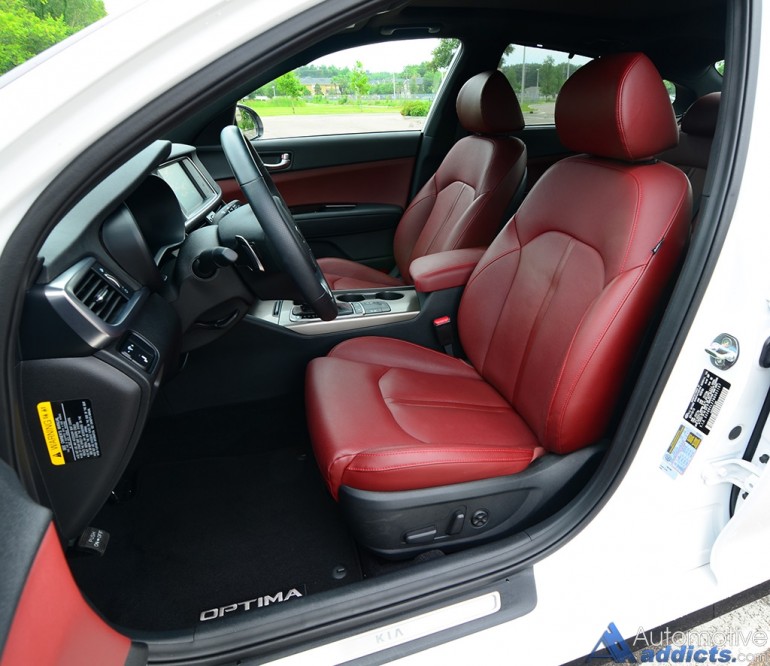 While interior volume is good, the rear seating area becomes an issue for taller individuals due to the low sloping roof line cutting into headroom. Otherwise, the seating areas are just what you would expect for a midsized sedan.

Features, such as a panoramic sunroof and power sunshade, LED interior lights, power-folding mirrors, LED taillights, HID headlights with dynamic bending, 18-inch alloy wheels, blind spot detection, rear cross traffic alert, and 8-way power front seats with lumbar and driver’s seat memory, all add a nice taste of luxury for the new Optima. The latest iteration of Kia’s infotainment system is simple and straightforward in its operation. Though, some of the deeply embedded menus somewhat hide functions that should otherwise be accessed from some of the key menu screens. The integrated GPS navigation system, all part of the infotainment system’s 7-inch touch screen, could use some updating for mapping to provide 3D viewing instead of the normal 2D and North-Up viewing. 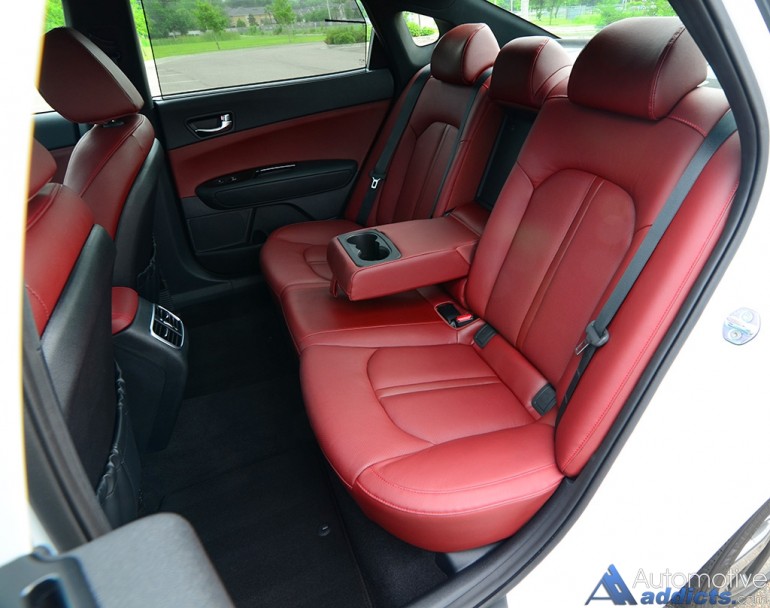 Getting down to the thick of what Kia is known for to provide a value-added perspective for buyers, the new Optima attempts to keep its bottom line low. Offering the highly praised powertrain warranty of 100K miles or 10 years is all the more reason for my new 2016 Kia Optima SX Turbo’s as-tested price of $33,215 to be at the right level within a vast midsized vehicle segment.