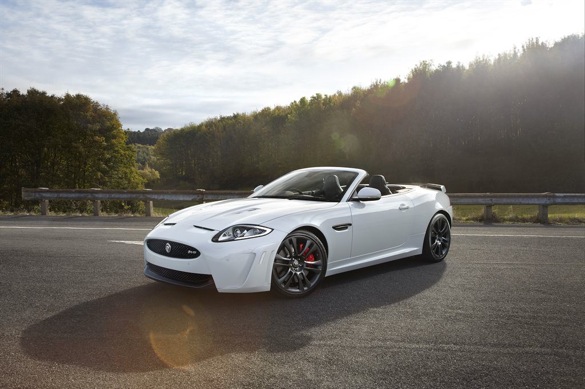 If you ask us, the front end of the new Jaguar XKR-S is just a bit overdone. Sure, the flares before the front wheel arches are probably functional, reducing air pressure buildup (and lift) in the front wheel wells, but the overall effect is that someone threw a cheap body kit on a Jaguar. The drooping snout doesn’t help, either, and makes the front of the XKR-S Convertible look like a cross between a grasshopper and a channel catfish.

That said, it in no way diminishes our lust for the 550-horsepower ragtop. Let’s put it this way: if Scarlett Johansson knocked on your door and said, “let’s party,” would you say “pass” if she was wearing too much makeup? We didn’t think so.

The 2013 Jaguar XKR-S Convertible joins the XKR-S Coupe in Jaguar’s lineup, and shares the same supercharged V-8 as its hardtop stablemate. As mentioned, it’s good for 550 horsepower and 502 lb.-ft. of torque, which is good enough to get the ragtop XKR-S from 0 to 60 in 4.2 seconds, on the way to a 186 mile per hour top speed.

Thanks to the extensive use of aluminum, the Jag’s body is the stiffest in its class, despite the loss of its top. The suspension has been revised to improve handling, but Jaguar’s Adaptive Dynamics system will ensure that the ride isn’t punishing on the way to the track (or your favorite canyon road).

On more sedate XK models, the convertible commands a $6,000 premium over the price of the coupe. Expect a similar markup for the XKR-S Convertible, which would put the price at $138,000 when the car hits Jaguar dealers in early 2012. In the meantime, enjoy the video (hosted by Left Lane News) of the XKR-S stretching its legs in Germany, below.