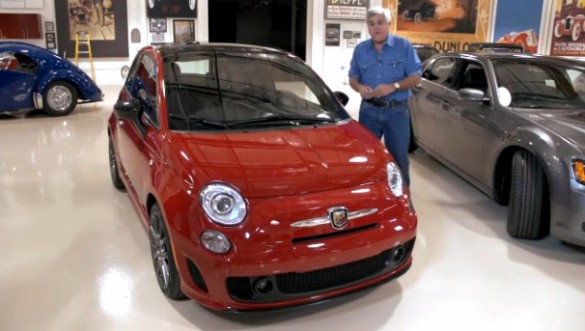 The 2012 Fiat 500 Abarth will soon begin to trickle into Fiat dealerships, so Fiat chief engineer Joe Grace thought it would be an ideal time to bring one to Jay Leno’s Garage. Leno already has a standard Fiat 500, which he admits to driving on a regular basis for the entertainment value alone. Winding the 500 out to redline in each gear is fun, Leno explains, while attempting the same thing with a McLaren will likely produce jail time.

The video below includes a five-minute overview of the history of Abarth. If you’re unfamiliar with the brand, it’s worth watching, but if you’re well versed in Abarth knowledge it probably won’t teach you anything new. Oddly enough, we don’t get to see Leno driving the Abarth 500 in this episode, so there’s no sense of how the car really compares to a base 500 from an owner’s perspective.

Unlike many “sporty” versions of economy cars, the Fiat 500 Abarth has some serious thought behind it. Everything from the engine’s internals through the gearbox and suspension has been beefed up for durability and performance, and even the stability control program has been revised to include a “sport” mode and a “full off” mode for track work. We can’t wait to get behind the wheel, and we promise a full report as soon as we do.