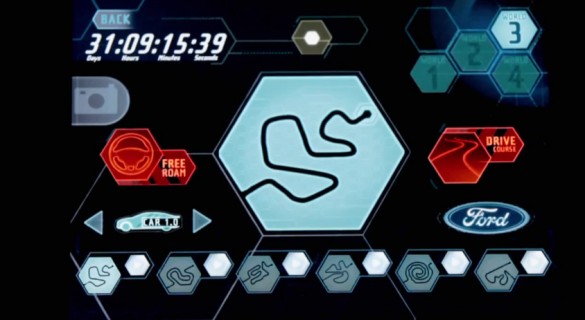 It’s bad enough when automakers tease new products by leaking faked “spy photos” months in advance, but Ford has taken jumping-the-shark to an entirely new level with the 2013 Ford Focus. Not content to give us a few images of the directional signal, or the wiper switch, or stitching on the upholstery, Ford has actually created an app for the iPhone or Android platforms whose sole purpose is to build interest in the new Fusion. We realize that some people have excess time on their hands, but we can’t imagine having that much down time. Ever.

The app doesn’t show you the new Fusion, except in heavily disguised form. You can see ”re-imagined” versions, a la Pimp My Ride, and “drive” them on up to 19 different courses. You also get sound bites from the designers and engineers behind the car, and exclusive video content leading up to the Fusion’s launch at the 2013 Detroit Auto Show. The app also lets you see the reveal on the same day the new Fusion is launched, saving you a trip to Detroit in January.

An app like this would be hugely popular for an aspirational car like the Porsche 911 or the BMW M5. For a relatively common midsize sedan like the Ford Fusion, we’re not sure that we see the point. It’s unlikely that the app will hit the same demographic as the Fusion sedan, so we’re not sure it will help move cars or even draw much interest to the product.

We haven’t seen the new Fusion up close and personal yet, but we’ve heard (very) good things about it. We’ll be sure to let you know when we have details to report.