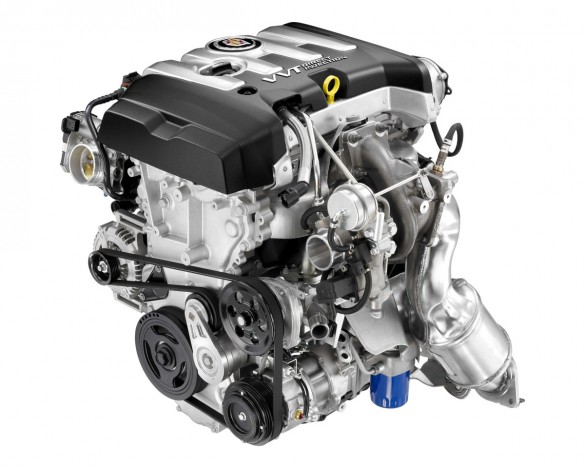 If you want more proof that Cadillac is serious about challenging the likes of BMW with its upcoming ATS sedan, here it is: the car will (initially) come with three engine options, including a 2.5-liter four cylinder that should serve as the base engine and will probably produce just short of 200 horsepower. Cadillac will offer a 3.6-liter V-6, too, probably pulled from the SRX crossover. In the 2012 SRX, the engine produces 308 horsepower and 265 pound-feet of torque, which should prove to be sufficient to power a compact sedan.

The big news, however, is a Cadillac-tuned 2.0-liter turbocharged four-cylinder, which will put out 270 horsepower and 260 pound-feet of torque. That’s 135 horsepower per liter, making the new engine one of the most power-dense motors on the planet. It achieves this via direct fuel injection, continuously variable valve timing and a twin-scroll turbocharger that produces up to 20 pounds of boost. That’s quite a bit for a stock engine from a luxury manufacturer, so Cadillac has built the engine to include a forged crankshaft and oil-spray piston cooling; they’ve also focused on reducing friction to produce more efficient power.

Suspiciously absent from the lineup is an ATS-V engine, which we’re hoping will come further down the line. Of the available choices, the turbo four is the one most attractive to drivers, since the V-6 will add weight and make the car nose-heavy without producing significantly more power. The 2.5-liter four will be the high-volume engine, sold to buyers who care more about luxury and comfort than about driving and performance.

Look for more details on the ATS when the car breaks cover at the 2012 Detroit Auto Show.