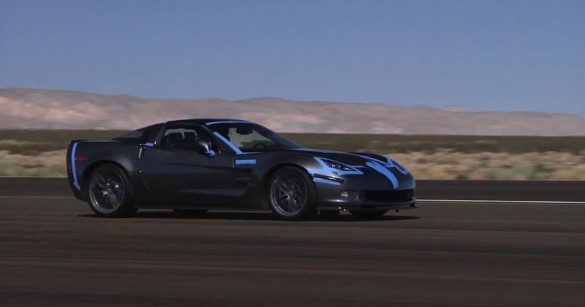 The Corvette ZR1 is the fastest car that GM has ever produced, and it’s the closest thing to a supercar that’s still being built by a major American manufacturer. Stuffed full of 6.2-liter, supercharged LS9 V-8, the uber Corvette makes some 638 horsepower and 604 pound-feet of torque. Given enough room (and the right conditions), Chevy says the car is capable of a 205 mile per hour top speed.

The ZR1’s top speed is exactly what Matt Farah and The Smoking Tire set out to test at the Mojave Mile in the high California desert. Using a press fleet ZR1 Corvette (which we’ll never see here in the Southeast), Matt set a goal of 180 miles per hour in the standing mile, but failed to take a few things into consideration. The track’s altitude of 2,700 feet, for example, reduced the ZR1’s output from 638 horsepower to roughly 577 horsepower.

Did he make it? You’ll have to watch the video to find out, but let’s be clear about one thing: Matt either has huevos mas grande or a clear lack of sanity for pushing the double-ton in a press fleet car. Those of us who drive them (occasionally on the race track) know they aren’t exactly maintained the same way we’d look after a top-speed-run-car. Having a tire plug let go at 150 miles per hour, for example, would be an, um, unpleasant experience.