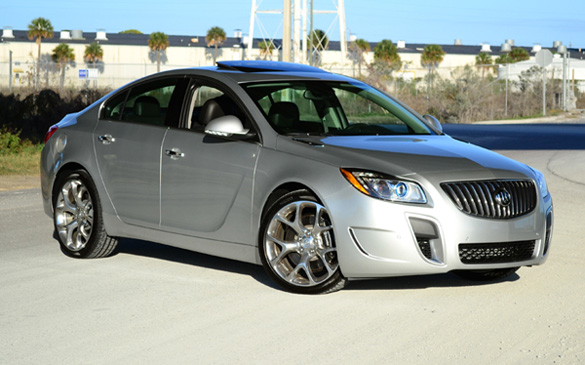 Simply put, the all-new 2012 Buick Regal GS is one hot looking vehicle that is very far from that old perception of being your “grandparent’s Buick”. After waiting many years for a performance injection in the Buick line up, the new Regal GS, based off of the European Opel Insignia OPL platform, makes its way into the hearts of American consumers.

The all-new Regal GS has made a smooth touchdown eager to help redefine the Buick brand. The latest Regal, introduced as a 2011 model, has taken on a new light thought to basically be an Americanized Opel Insignia. This is actually a good thing considering the Insignia’s versatile platform and European success since its conception in 2008. 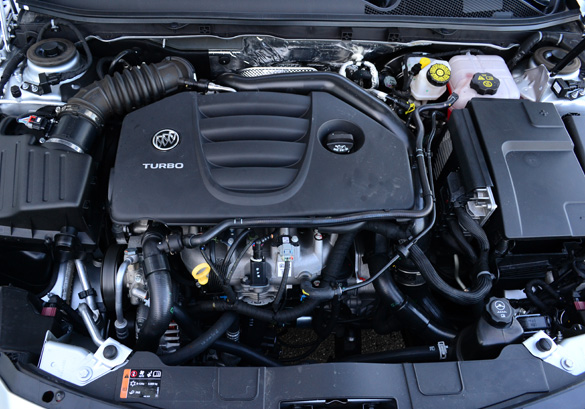 Enthusiasts anticipating the all-new Regal GS have a lot of excitement to look forward to while at the same time digest a bit of disappointment after Buick opted to power the new Regal GS with a turbocharged 4-cylinder engine instead of its European Opel Insignia OPC counterpart’s 2.8-liter 300 horsepower turbo V6. Instead of getting a Lion at the heart of the Regal GS, we get a timid Pitbull in the form of Regal’s 2.0-liter turbocharged 4-cylinder good for 270 horsepower and 295 ft-lbs. of torque. 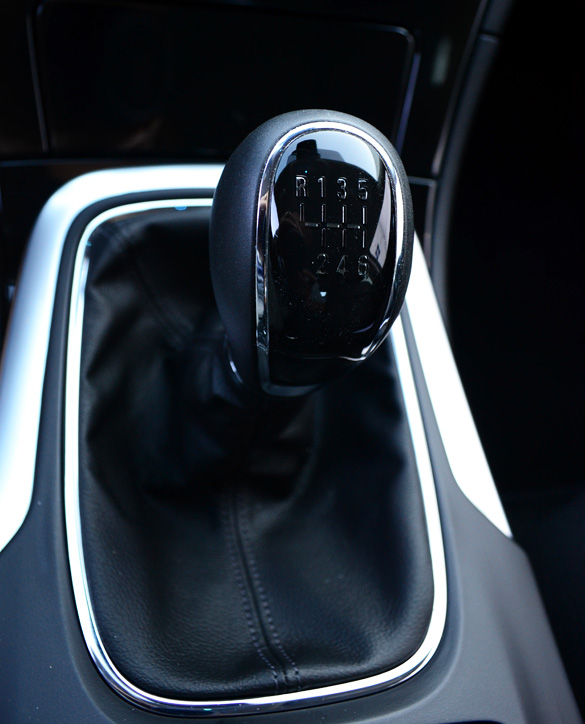 Performance attributes of the new Buick Regal GS are on point for a sports sedan with the one unfortunate exception of its underwhelming engine. On paper the turbocharged 2.0-liter sounds rather appetizing but it fails to keep you satisfied as you beg for the main course meal or at least some desert. The standard 6-speed manual transmission on the Regal GS, a first for Buick, attempts to make up for the unfulfilling meal. The main downfall of the 6-speed box is shift throws are somewhat long. Otherwise, the clutch feel is excellent where it allows a competent driver to get all he/she can out of the narrow powerband of the turbo 4 banger. 0-60 mph times are just under 7 seconds, which is not much to brag about unless you consider the fact that it is the fastest Buick in the lineup. Stopping distance comes in at an impressive 110 feet from 60 mph. A 6-speed automatic transmission will be available on the new Regal GS later next year (2012). 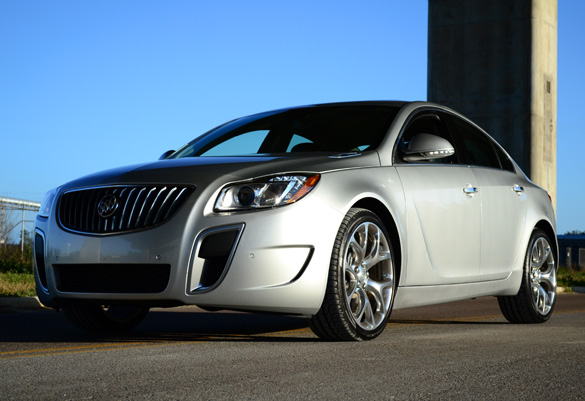 Driving the new Regal GS can be rewarding for a true automotive enthusiast. At times you will hear a faint whisper from the turbo spooling and a quick whoosh sound from the blow-off valve after getting a nice surge of 295 ft-lbs. of torque. It is just enough power feel yourself flexing neck muscles to keep your head from being pulled closer to the headrest. Being a front-wheel-drive sports sedan, the new Regal GS tends to break the front wheels loose in first gear under full throttle. This happens at low midrange RPMs where the torque peaks. If you spin the engine any higher than 5000 rpm the power tends to flatten out and it feels as if the Regal GS can’t catch a second wind for any additional power. 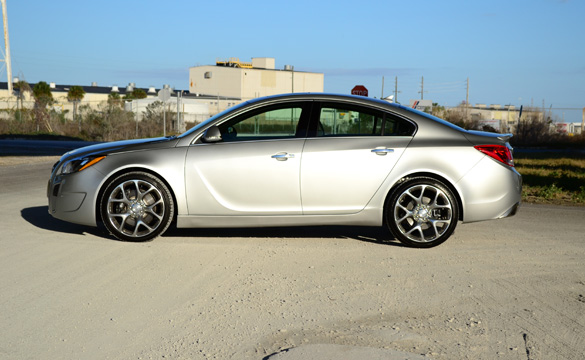 A unique 4-wheel independent suspension and front HiPerStrut system helps keep torque steer to a minimum. A sporty exhaust note is noticeable when driving and at idle giving the Regal GS more of a sporty character. Onlookers we definitely have the need to do a double-take wondering if they just saw a sporty good-looking Buick, something rarely seen, pass them by.

The 2012 Buick Regal GS is still a worthy competitor in the sports sedan market. When matched up against vehicles such as the Lexus IS 250 F-Sport, the GS has an apparent edge in performance all around. Not to mention, the Regal GS gets slightly better gas mileage and is easier on the pocketbook when compared to a similarly equipped Lexus IS. 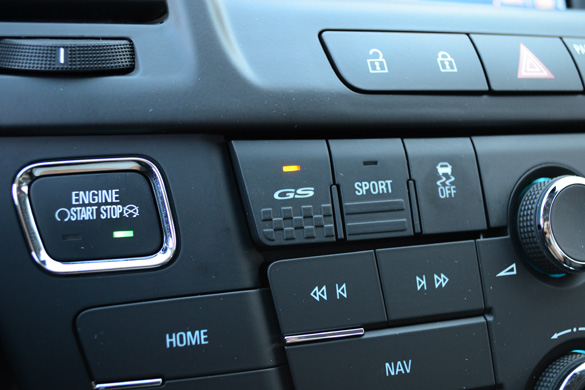 The all-new Regal GS is all about playing the sports sedan game even if it requires going into overtime for a win. Despite somewhat of a lackluster power delivery, the new Regal GS is plenty capable in other areas such delivering a good balance between ride qualities and handling abilities. Much of this is due to the Interactive Drive Control System (IDCS), which combines suspension damper management and steering wheel weight adjustments based on driver aptitude or dialed-in through dash-mounted buttons. There are three modes for the system, standard (set as a default), Sport and GS mode. Standard mode is selected by default when the vehicle is started. Standard mode automatically adjusts dampers providing the smoothest ride possible. In Sport mode the suspension dampers and steering wheel weight are tightened slightly while the GS mode maximizes damping and weights the steering wheel even more. GS mode really makes the chassis come alive when you start to toss the Regal GS around. You will undoubtedly feel the difference once GS mode is selected. The optional meaty Pirelli 255/35/ZR20 tires and 20-inch wheels at all four corners only add to the equation to give the Regal GS a solid grip and feel on twisty roads. Even with the larger 20-inch wheels, the ride quality is not compromised. Excellent ride quality in standard mode is mostly due to the Regal GS making millisecond adjustments to the electronic dampers depending on road conditions. 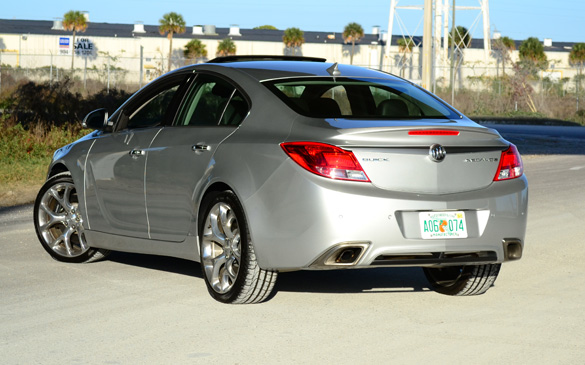 The new Buick Regal GS interior has a bit of that desired European touch. One area that this can be found is in the supportive front bucket leather seats. The fit and finish of the new Regal GS is adequate even for European standards but some of the plastic buttons with a matt finish on the dashboard cheapens up what could be an interior that rivals some expensive luxury sedans in America. A new high-resolution LCD touch-screen interface is a slight deviation from other similarly equipped GM vehicles but proves to be fairly intuitive considering how you have abundance of redundant controls. A new central control dial and set of main-function buttons are located in front of the armrest. This new control unit keeps things basic giving the driver the ability to quickly navigate through vehicle functions, control the SD-card-based GPS Navigation system, select audio sources for the Harmon Kardon Audio system and make other vehicle setting selections. 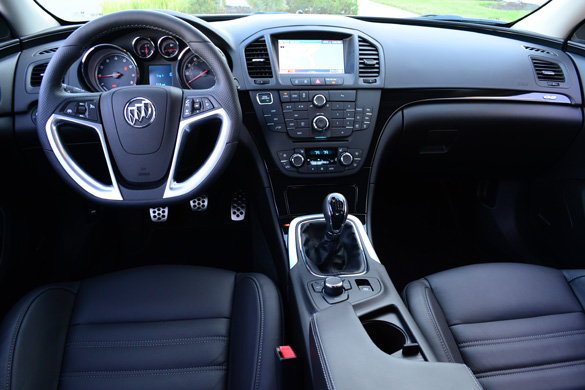 The integration of controls comes together nicely through the central LCD touch-screen. Despite the LCD screen’s smallish size, it is bright and easy to read even for rear seat passengers. The premium 320-watt Harmon Kardon audio system with 9-speakers is superb. The audio quality was a big surprise for a midsized sedan. Most of the music I played through the system demonstrated clear high notes and supple low bass tones without any abnormal vibrations. 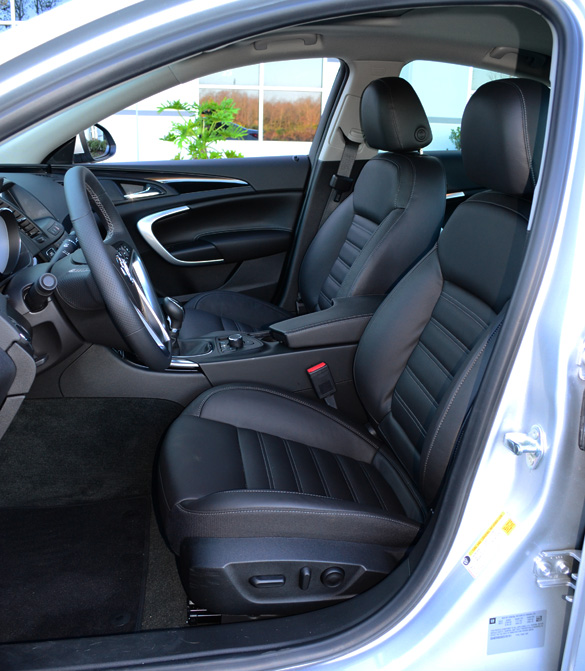 The drivers seating position is great with the omission of pedal room. The footwell seems as if it is designed for a child as I had difficulties finding enough room to situate my size 12s, let alone attempting to healtoe. Apart from doing any fancy footwork, the new Regal GS is surprisingly comfortable up front. Rear seating is bit of a challenge for someone 6 feet or taller due to the lack of legroom. As a plus for front seat passengers the front buckets have a lot of adjustability, which virtually eliminates any usable rear legroom in the new Regal GS. Headroom becomes an issue for rear seat passengers as well due to coupe-like sloping roof line. 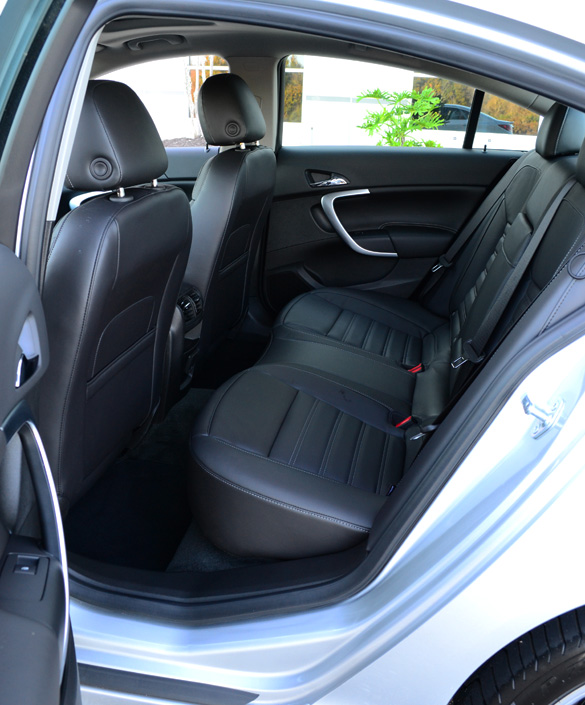 The all-new Buick Regal GS has a fashionable look about it that screams performance. If the aggressively styled front bumper and fascia don’t do it for you, maybe the large Brembo brakes up front or 20-inch polished alloy wheels will. Take a gander inside and you will also find a flat-bottom sports steering wheel and three metal sport pedals. If that is not a far cry from the old perception of your “grandparents Buick”, then I do not know what is.

Being that the new Regal GS is more of a specialized sports sedan that not many people immediately recognize, Buick has its work cut out for shaking off that “old-persons car” connotation. With a base price of the all-new Regal GS starting at just $34,450, this should not be big hurdle to overcome provided the new generation of buyers do not have grandparents that drove a Buick back in the day.