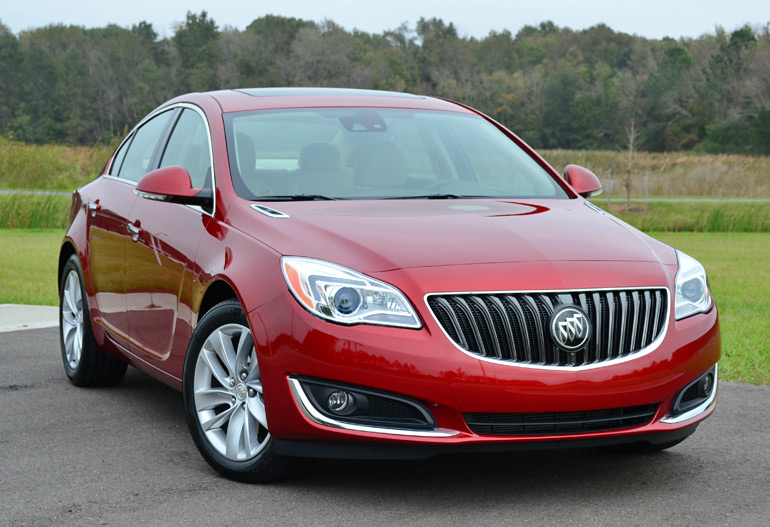 The new Buick Regal gets a design refreshing for the 2014 model year cleaning up the dashboard while subtly restyling the front and rear fascia. Additionally, the new 2014 Buick Regal receives a bump in power output and fuel economy from the 2.0-liter 4-cylinder turbocharged engine for an 18 percent increase in power with a flatter torque curve giving the luxury sedan a better balance of performance. 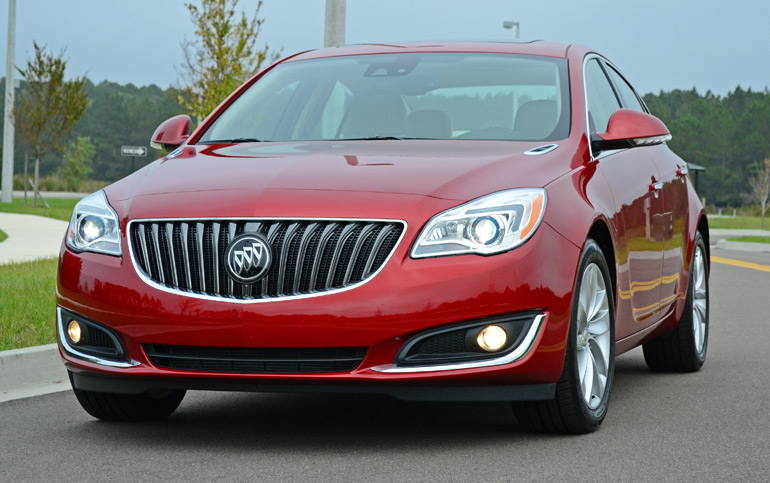 Long gone are the days of your grandparents Buick while the new 2014 Regal injects a nice dose of European attitude within the ride quality and over-all performance. The new 2014 Buick Regal Premium Group equipped with the direct-injection 2.0-liter turbocharged 4-cylinder engine produces a healthy 259 horsepower at 5,300 rpm and a substantial 295 ft-lbs. of torque between 3,000 and 4,000 rpm. Additionally, the refined 2.0-liter powertrain improves upon its throttle response and delivery of power for a wider range of usable power. The added power and slightly improved fuel economy, 21 mpg city and 30 mpg highway, are due to a completely new engine featuring a new aluminum cylinder head, a forged steel crankshaft, cast-iron bearing caps, a variable displacement oil pump, sodium-filled exhaust valves, and a pair of chain-driven balance shafts turning in the oil pan. These new changes throughout the range of GM vehicles utilizing the new 2.0-liter turbo-4 all benefit from the power boost and enhanced fuel economy. 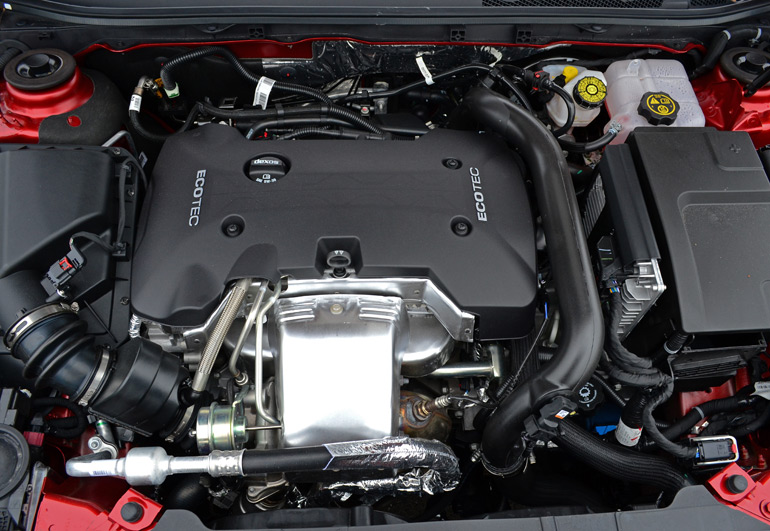 The new 2014 Buick Regal has a set of 4 different trim levels in addition to an eAssist mild hybrid utilizing a 2.4-liter 4-cylinder engine in conjunction with a 15-horsepower electric motor. Outside of the mild hybrid, the new 2014 Regal base trim gets the new 2.0-liter turbo 4-cylinder engine while the performance-inspired Regal GS gets the same 2.0-liter to produce the same horsepower but all of its 295 ft-lbs. of torque is delivered through a wider rpm range (3,000 to 4,500 rpm) virtually matching the previous GS in performance but with more efficiency and refinement.

The road-doing demeanor of the new Buick Regal instills confidence in your driving abilities even when you tend to drift outside legal speed limit boundaries of local roads. The new 2014 Regal’s suspension combined with the sufficient power of the all-new 2.0-liter turbo engine gives you an assurance of never lacking the ability to overtake other vehicles or safely partake in spirited adventures on twisty roads. The updated springs and dampers of the suspension system are dialed in for a good balance of comfort and sport. Although the adjustable dampers made available in previous year Turbo Regal trims are no longer offered, the front HiPer Strut setup combined with firm springs and dampening aid in the new Regal’s stability and over-all ride quality. Road feel through the electric steering rack is translated in small amounts but still gives the driver something to reference by means of a subtle amount of added weight in steering effort at cruising speeds.

Straight-line performance of the new 2014 Buick Regal Turbo is appealing and more consistent than previous year models. Power comes on early and carries through the rpm band all up until the quick adapting 6-speed automatic transmission shifts. Manual shifts can be made through the shift lever in sport mode by manipulating it back or forward. 0-60 mph time comes in a respectable 6.4 seconds. Much of the 6-speed automatic’s adaptation comes about in its attempt to monitor your driving style. In some situations the transmission will hold gears longer with it detects spirited driving, much like a virtual sport mode. However, the 6-speed automatic does have a sport mode and manual shift mode, which in manual mode it proves to be quite useful as it holds the selected gear and allows you to bounce off of the rev-limiter without intervening. The shifts are relatively fast but nothing nearly snappy as an automated dual clutch unit. The use of the 6-speed auto’s torque converter is apparent when going through the gear cogs under certain loads. Nevertheless, the 6-speed auto is well adapted to the re-tuned turbo engine. 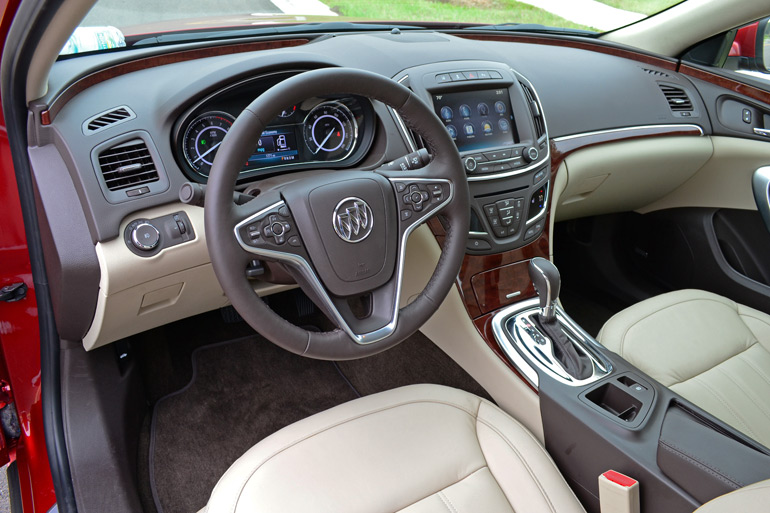 Inside of the new 2014 Buick Regal is a nicely sculpted dashboard that visually flows into the door trim to culminate the cabin’s fluid architecture. For the 2014 model year, the Regal gets a redesigned instrument cluster while the center console stack is cleaned up with more of a central focus on the 7-inch color LCD touch screen. The new updates for the infotainment system piece together a friendlier user interface with large clear icons and streamlined menu sets, somewhat like the Cadillac’s prided CUE system. In true GM fashion, OnStar directions can be downloaded to the system for turn-by-turn directions or utilization of the updated GPS navigation system, also proving to be easier to use then previous iterations.

Many of the updated dashboard controls and buttons are of soft-touch plastics, as well as the surrounding trim areas. The use of minimal wood trim accents the dashboard well while flowing nicely into the door trim, which has a pleasant plush touch exuding a perception of quality. The new 2014 Buick Regal’s dashboard, in all, makes it much easier to quickly access desired controls. Moreover, the updated instrument cluster with a center high-resolution 4.2-inch color LCD driver information screen, simplifies vehicle settings and information readouts all accessed through steering wheel mounted directional buttons (Regal GS gets a full 8-inch instrument cluster LCD screen with additional readouts). Also accessed on the steering wheel is the toggle for the optional adaptive cruise control, radar gap-distance setting, audio controls and a heated steering wheel button. Adding on to the optional Driver Confidence Package 1 and 2, which includes the adaptive cruise control system, the new Regal gets forward collision alert, rear cross traffic alert, lane departure warning, side blind zone/lane change alert, and automatic collision preparation. The auto collision preparation system was actually beneficial in my drive as I unknowingly approached a vehicle making an emergency stop in front of me and the system automatically applied the brake a split second before my foot reached the pedal. Simply put, it is a remarkable system that will benefit for decreasing the severity of front-end collisions, or in some rare instances, prevents them. 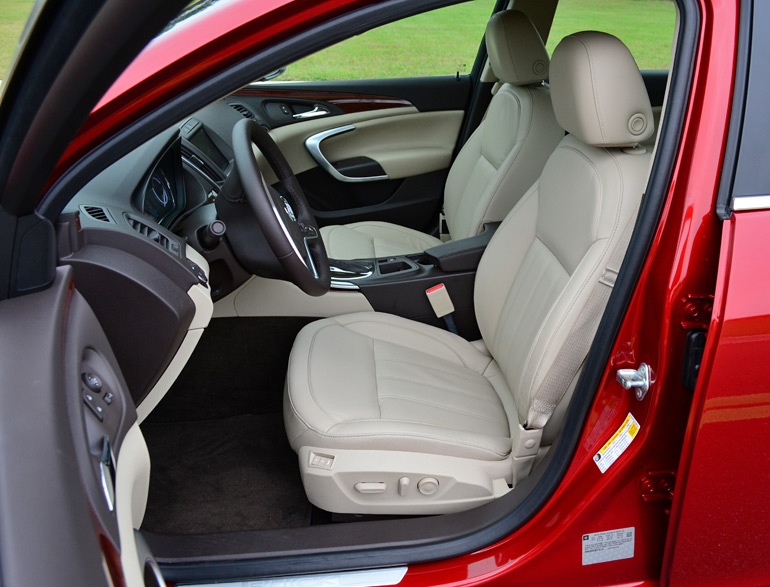 The unique seating surfaces of the new 2014 Buick Regal Turbo are slightly supportive and prove to be comfortable enough for long trips. The front seats allow for an abundant amount of travel forward and aft giving drivers of virtually any size, even my 6-foot-plus frame, the optimal position for comfort within the confides of the Regal’s cabin. Rear seating remains to bit short in size, somewhat dependent on the front seat positioning considering the front seats can be adjusted far enough back to just about touch the rear seat bottoms – which is a good thing for front seat occupants. Visibility forward is great while the rear visibility is slightly diminished due to a high beltline and the angle of the rear window. 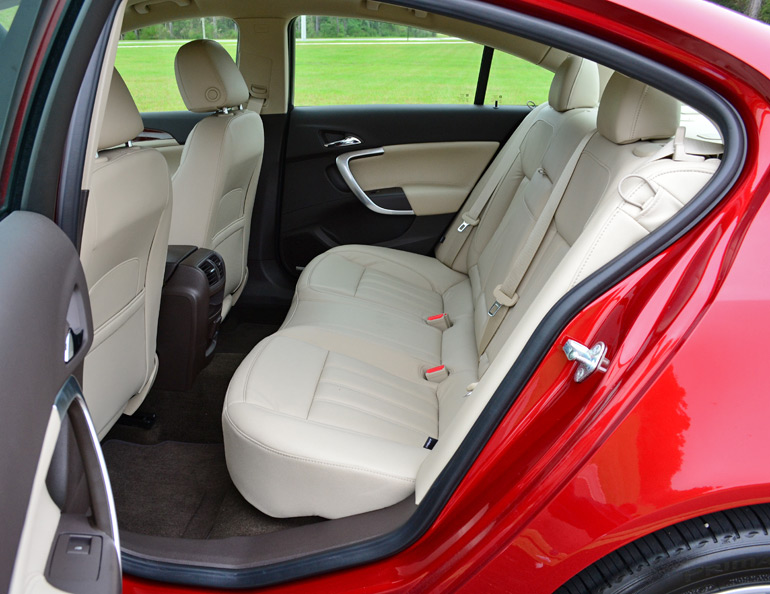 The all-new 2014 Buick Regal’s exterior styling freshens up from the outgoing model to add a restyled front fascia with new headlight housings including a nice LED daytime running light accent running across the top paying homage to the new design language found in other new Buick vehicles. The rear end gets re-sculpted with a chrome strip running through each end of the redesigned LED taillights. The freshened design adds a nice sports appeal to the overall look of the new Regal but not as daring into the sporting category as the new Regal GS. My new 2014 Buick Regal Turbo with the Premium Group 2 trim rides on 18-inch alloy wheels wrapped in 235/50R18 all-season Michelin Primacy MXM4 tires, proving to be capable rubber for the Regal’s road-hugging disposition. 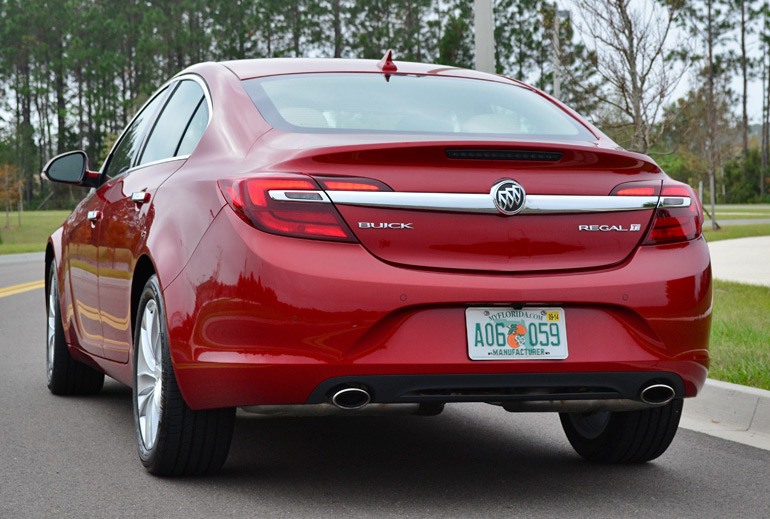 The new 2014 Buick Regal’s target demographic has expanded to reach a wide array of lifestyles and age groups. Part of the new reach is a testament to the Regal’s evolving character where it is a vehicle that highlights its driving dynamics without compromising luxurious appointments mostly polished with a vast list of amenities. Adding to this exceptional formula is the value aspect of the Regal even though its midsized classification serves up slightly less rear seating and cargo space than many counterparts. With a total of 5 trim levels (Leather (base) $30,615; Premium $32,485, Premium eAssist $32,485, Premium II $34,685, and GS $37,830) the new Regal should sit well with a wide range of luxury and sports midsized sedan seekers.