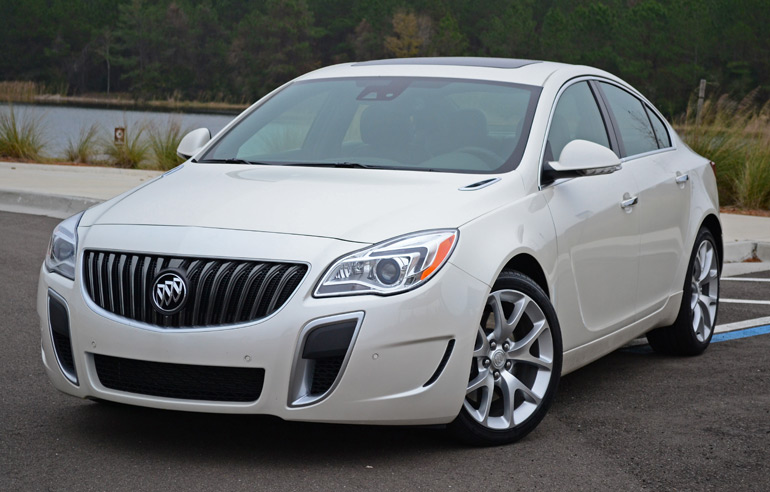 “This isn’t your grandfathers Buick!” That seems to be the statement circulating around my 2014 Buick Regal GS 6-speed manual test vehicle at our recent Automotive Addicts Cars and Coffee event in Jacksonville, FL. As onlookers goggled over the new Regal GS, they not only took notice to its sporty appearance and aggressive stance, but they we taken by my test vehicle being equipped with a 6-speed manual transmission and Brembo brakes up front. It is no doubt that the new Regal GS is an attention-grabber among enthusiasts as it takes them back on a reminiscing journey of vehicles like the Buick Regal Grand National and GNX.

The new 2014 Buick Regal GS embodies that spirited drive found in enthusiasts who can remember when Buick had rear-wheel-drive performance cars roaming the streets of America. Today, the new Regal GS sports its aggressive styling and a dash of that old performance inspiration wrapped up in a well-handling front-wheel-drive sedan package all powered by a new 2.0-liter turbocharged direct-injection 4-cylinder engine. 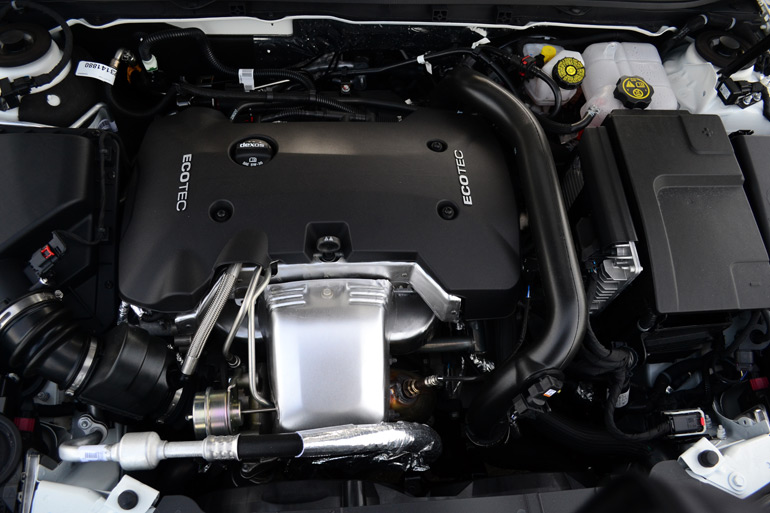 The new engine in the 2014 Buick Regal GS is much improved over the outgoing powerplant in that it is made up all-new mechanics for better efficiency of its power output. Total power for the new 2.0-liter turbo 4 comes to 259 horsepower at 5,300 rpm and 295 ft-lbs. of torque through a range of 2,500 rpm to 5000 rpm.  With a wide range of torque directed to the front wheels (or all 4 via an optional new Haldex all-wheel-drive system with an electronic limited slip differential), the new Regal GS gives you the reassurance of its ability to overtake on the highway or quickly get out of the hole from a dead stop. Additionally, to keep that reassurance in tack, torque steer is absent as well as any upset or unwanted reverberation in the chassis. 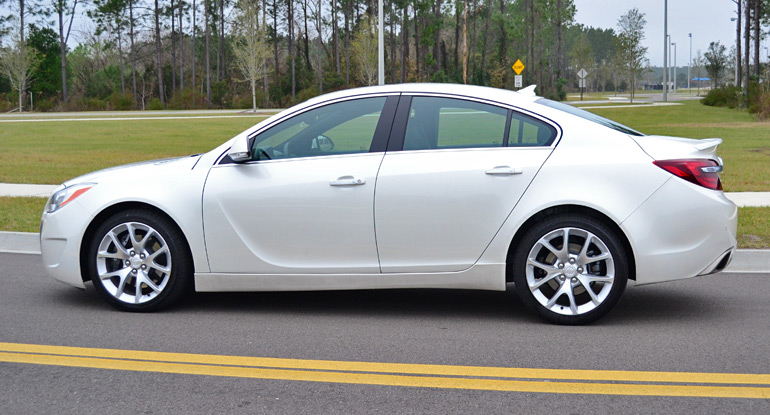 Building off of the solid platform of the new 2014 Buick Regal Turbo, which I was able to experience and share my positive outlook in a previous review, the new Regal GS is tweaked to put forth its hidden athleticism to the pavement. Over all, the new Regal GS is a soft vehicle when it comes to how it lays down its power and ample 295 ft-lbs. of torque. I found that the power is substantial for its size and weight, but does require an extra effort on the driver’s part to extract the best parts of its available performance. You could say that the most apparent aspects of its softness is the predictable clutch engagement and long-throw 6-speed manual transmission ending with the Regal GS’ quiet whistle of the turbocharged 4-cylinder engine. The GS is never going to set off any car alarms from its faint exhaust note at any rpm. Rowing through the 6-speed manual transmission will require you adapt to the long throws and manage the slip of the front wheels with traction control disabled. 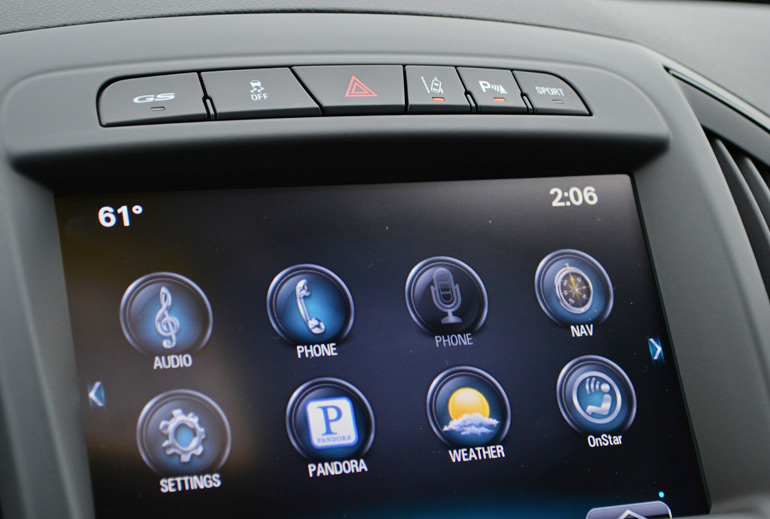 One of the highlighted benefits of the all-new Regal GS in the performance arena is the Interactive Drive Control system, which has 3 settings being the default normal mode, Sport mode, and GS mode. Changing the modes via top-dashboard-mounted buttons firms up the dampers for more aggressive characteristics of the suspension system. Sport mode mildly firms up the dampers while the aggressive GS mode firms them up even further but not to the point of any harshness. In a way, GS mode still provides a very smooth yet competent ride quality really making the solid chassis of the Regal GS shine and prove its willingness to compete on those occasional autocross or light track duty days. The Interactive Drive Control system also firms up the steering wheel effort to simulate an aggressive steering rack with a bit more feedback and required effort. I found that GS mode was more of a necessity for enthusiasts or even the casual driver who likes to have a little fun. 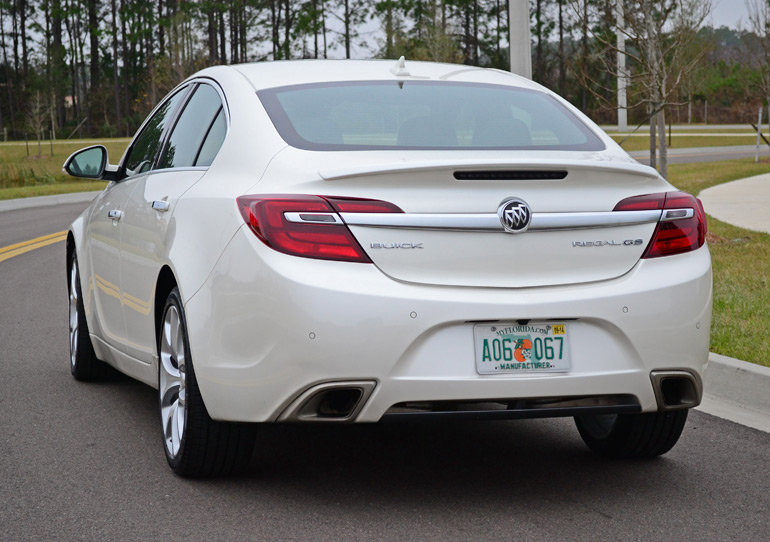 The balance and handling of the new Buick Regal GS is surprising. The four-link independent rear suspension combined with wide-patched P245/40R19 tires at all four corners (or optional P255/35-ZR20 summer performance tires and polished alloy 20-inch wheels) and active Computer Damping Control, all aid in the lateral handling abilities of the new Buick Regal GS. Of course by selecting the GS Interactive Driving Control mode it makes things more competent during spirited driving with firmed dampers and heavier steering effort, which seems to translate the road to the driver a bit better than in normal mode. Putting the 2014 Regal GS into a hard turn can actually emit a slight bit of oversteer, something not expectant from a front wheel drive vehicle. Of course you can quickly change things around in a hard turn with a bit of gas pedal action to thrash the front wheels for an abundance of understeer. Keeping things in a straight line you find the Regal GS putting down a 0-60 mph time of about 6.3 seconds. Achieving that number is not always an easy task as you find different shift points within the large rpm range of peak torque. The all-new direct-injected turbocharged 2.0-liter engine pleasantly fulfills its pulling duties all the way up redline at 7,000 rpm without much of a lag or threshold where some turbo engines tend to fall flat. 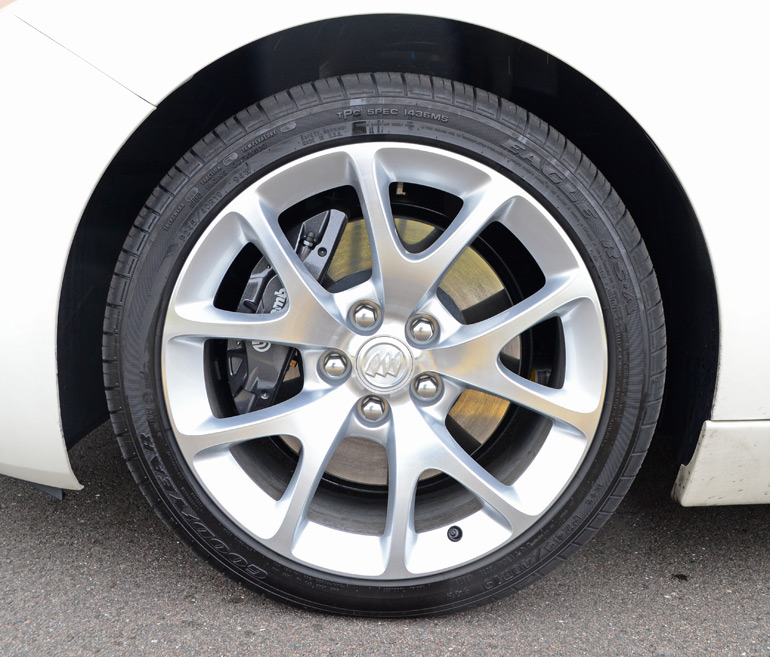 The many surprises expressed verbally from onlookers at our local Automotive Addicts Cars and Coffee show was a gift that kept on giving when it came to our new Regal GS test vehicle. Not only did the 6-speed manual transmission and Brembo brakes take folks by surprise, but the interior also had its own duty to raise eyebrows once again. The thick flat-bottom leather-wrapped heated steering wheel combined with the uniquely patterned and well-bolstered sports seats up front and aluminum sport pedals of the Regal GS, all added to the sports appeal of this Buick. At the end of it all, after explaining to others that our new Regal GS had a 2.0-liter turbocharged engine with 295-ft-lbs. of torque, I quickly lost count of how many times the phrase “this is not your grandfather’s Buick” was uttered out of onlooker’s mouths. The new refreshed dashboard for 2014, mimicking the rest of the Buick Regal line, consisted of many soft-touch plastics and a perception of top-notch fit and finish quality. The new refreshing of the 2014 Regal’s dashboard cleans things up and places more emphasis on ease of usability and a better focus on the large high-resolution 8-inch LCD touchscreen mounted high in the center of the dash. Exclusive to the Regal GS was a large center gauge cluster color LCD screen for readout of the speedometer and configurable vehicle information including g-force metering. 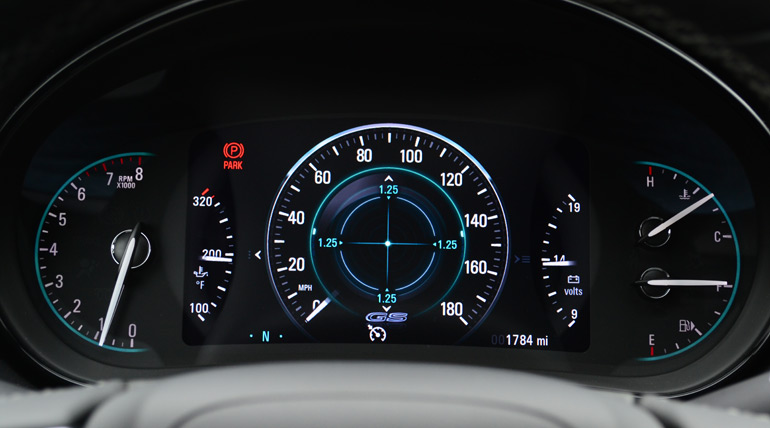 As far as efficiency goes, the new 2014 Regal GS actually beats out the Turbo Regal by one mpg on the highway in front-wheel-drive configuration. The new Regal GS gets an EPA estimated 20 mpg city and 31 mpg highway. My highway drive up interstate 95 returned an average of 29.7 mpg and around town I saw a steady 21 mpg over the course of a closely-monitored 8 miles of downtown Jacksonville streets. 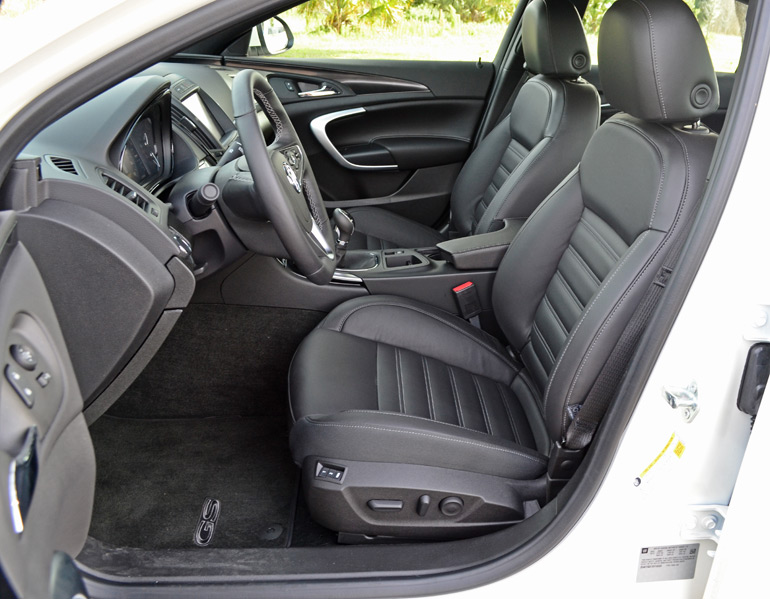 The complete balancing act of bringing that Buick performance passion back to the market with the new Buick Regal GS may seem like a complicated task. Though, the new 2014 Buick Regal GS is an excellent start but its over-all softness and lacking ability to really keep up with competitors on spirited drives and track endeavors may be its single disappointment. On the other hand, I fail to remember a time when a grandfather could fun driving a 6-speed manual turbocharged Regal with 295 ft-lbs. of torque. I know my grandfather or father wouldn’t turn down that opportunity. 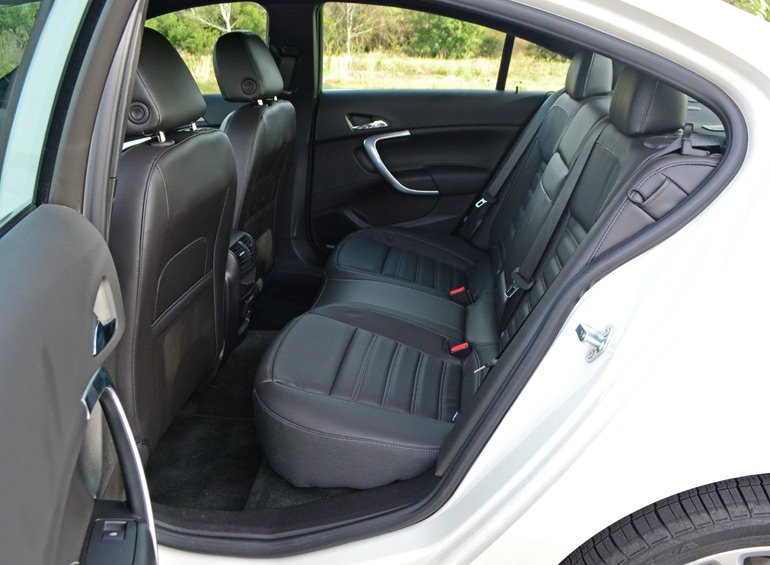 Being that the Regal GS is the top end of the trim levels, it includes all features found on the Premium 2 trim in addition to GS specific add-ons to set it apart as the performance oriented vehicle of the bunch, such as the addition of adaptive dampers and selectable modes for the Interactive Driver Control system. The aggressive and unique exterior styling is also an added benefit for the Regal GS’ performance aptitude ending with standard 19-inch alloy wheels or the optional polished 20-inchers.

The new 2014 Buick Regal GS is priced perfectly in line as the top trim for the Regal bringing in a base price of $36,905 and my test vehicle having an as-tested price of $40,715 including a $925 destination charge. As far as value perception, the new Regal GS prides its soft-touched performance edge behind the Buick nameplate to characterize a visual and sensual-performance surprise to shatter the brand’s old preconceptions.