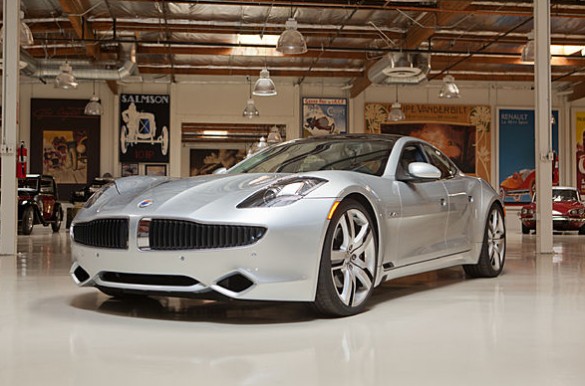 Chances are good that you’ve heard of the Fisker Karma. Recently launched, the car has made appearances on CBS’s “Two And A Half Men,” but it’s already been the subject of two voluntary safety recalls by Fisker. Like the Chevrolet Volt, the Fisker Karma is an extended range electric vehicle, but unlike the Volt is aimed at the luxury market. It’s not a sport sedan, but it is a legitimate grand touring car, with a price tag (north of $100k) to match.

Designed by Henrik Fisker, the Karma is powered by lithium-ion batteries driving two rear-mounted electric motors. Combined, these motors produce the equivalent of 400 horsepower and 1100 pound-feet of torque, and on battery power alone the car has a range of up to 50 miles. When the batteries run down, a gasoline-powered generator kicks in, providing power to the motors and giving the Karma a virtually unlimited range (assuming you stop for gas every 250 miles, that is).

With as much torque as a Bugatti Veyron, you’d expect the Karma to be quick off the line. It is, but the car is hampered by its 5,300 pound curb weight, so the run from 0 – 60 takes just under six seconds. Top speed is 125 miles per hour, which should be fast enough for the type of buyers Fisker has in mind.

Since Jay Leno already has a Chevy Volt, he has a sense for the design behind the Fisker Karma. Is he impressed by the extended-range EV grand tourer? Check out this episode of Jay Leno’s Garage (in its new format) to find out.