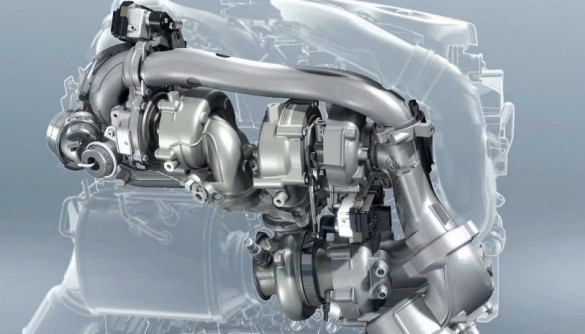 Forced induction, in the form of supercharging or turbocharging, coaxes more horsepower out of an engine by cramming in more air. Both methods have fans and detractors, and both methods have their strengths and weaknesses. Superchargers are typically belt driven and therefore scavenge a small-but-measurable amount of power from the engine to operate. Turbochargers use spent exhaust gasses to drive a turbine and compressor, and therefore offer essentially free horsepower.

Turbochargers, however, have their limitations as well. Generally speaking, a smaller turbo, with a low-mass impeller, will spool up quickly but can’t produce significant power beyond midrange. Larger turbos take longer to spool up, (thus producing turbo lag), but typically generate more boost and produce a broader range of power. Twin-turbo systems, which have been in use for years, generally employ both small and large turbos to optimize power delivery across the broadest range possible.

If two turbos are better than one, then three turbos, if properly sized and sequenced, are better than two. That’s the thinking behind the TwinPower Turbo system (which, ironically, uses three turbos) that BMW is employing on the new, diesel-powered M550d xDrive sedan. At low engine speeds, a small turbo provides near-instant boost, before handing the force-feeding duties off to a second, slightly larger turbo. At high engine speeds, a third small turbo comes on line, ensuring that the additional power is delivered seamlessly across an engine’s speed range.

If you get the feeling that the system is complex, you’re correct. As the video below, courtesy of BMW Blog, demonstrates, the plumbing linking the turbos to the engine is complex, and the two smaller turbos benefit from variable geometry compressors. When working optimally, the system should produce impressive power and torque, delivered across an engine’s entire speed range. When something breaks out of warranty, however, owners may not have the option of taking the car to a local mechanic for repairs.