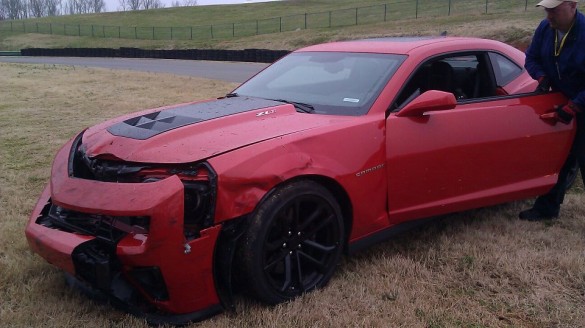 There is an unwritten rule in automotive journalism that says, “though shalt not stack the press fleet cars.” While the rule applies to any car you’re given the keys to, it applies to a higher degree with pre-launch cars rolled out by automakers to get good press prior to availability. Stack a pre-launch car, and you reduce the population for other journalists to drive. You also become “that guy,” and no one wants to be “that guy.”

This week, “that guy” is Aaron Gold, who just happens to be the vice president of Los Angeles’ Motor Press Guild, as well as a producer at Top Gear USA and an editor for About.com Cars. In other words, lapping VIR in a Camaro ZL1 wasn’t Mr. Gold’s first time on a track in a high-powered car. We don’t know what his driving background is exactly, but as Gold explains on About.com, the accident wasn’t caused by pushing the limits at high speed.

Instead, rain began to fall on the track, bringing oil to the surface. Approaching a corner, Gold was admittedly off-line and fed on too much throttle at the apex. The result, as anyone who’s ever driven a high-horsepower, rear-wheel-drive car in the rain will tell you, was throttle-on oversteer. To his credit, Gold admits that a more talented driver probably could have kept the car off the tire barrier, and GM claims the damage to the press fleet ZL1 was minimal.

What can we learn from Gold’s off-course excursion? First, most of us tend to over-rate our driving abilities. On a track, in a fresh rain, a 580 horsepower car demands instant respect, and everything must be done to keep the car balanced. We’re guessing that Gold was lapping with the electro-nannies turned off, which makes for impressive, tail-out power slides through corners on dry pavement, but ups the penalty for a mistake in the rain exponentially. A higher gear, as Gold admits, probably would have been a better idea, as would sticking to a clean part of the racetrack (staying on line).

We’re off to drive the Nissan GT-R at Palm Beach International Raceway tomorrow, so Gold’s lesson will be fresh on our minds. Gold’s time in the “that guy” seat will be limited, but we sure as hell don’t want to be the journalists who displace him.