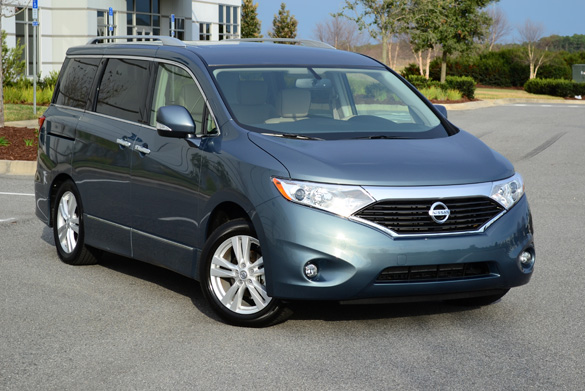 The Minivan segment remains to be quite competitive despite such a steady influx of 7 passenger SUVs and crossover vehicles. One Minivan that remains to stay in the game with a bold approach to styling and available features is the new 2012 Nissan Quest.

For 2012 the new Nissan Quest carries over its redesign, which was first introduced as a 2011 model. The new 2012 Nissan Quest takes a different approach to its exterior styling. Some may argue that the styling is reaching far across the isle when it comes to traditional Minivan styling. I would have to agree with that idea to a degree. 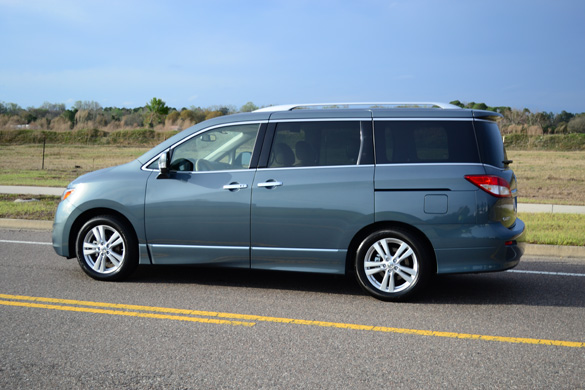 The new 2012 Nissan Quest, with unique exterior styling, takes a different direction to become more noticeable in the Minivan spectrum. That can be a good or bad thing, all depending on if you think the new Nissan Quest looks good or not. To put things mildly, the 2012 Nissan Quest gets people’s attention, but they may not all posses a positive expression on their face at first glance.

Apart from my mixed feelings about the exterior styling of the new 2012 Nissan Quest, it remains to have one of the better interior arrangements out of other Minivan offerings. The new Nissan Quest’s interior is perceived as high-quality with wood trim, plastic and leather trim pieces that all work well together. Moreover, the dashboard controls are all well-placed with a soft touch to each button. 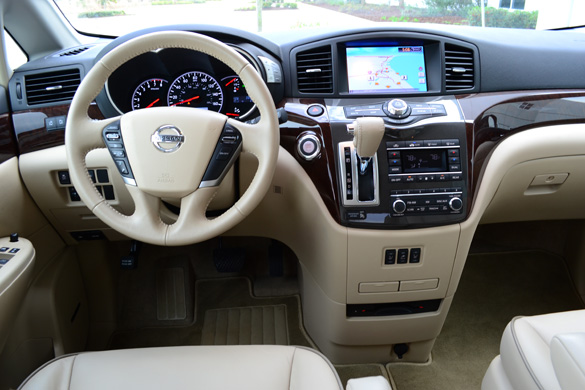 Over the years, Nissan has had room for improvements in the interior department. Having driven many vehicles from the new Nissan lineup, it is clear that they have done wonders to bridge the gap between their over-all interior quality. In some instances the new 2012 Quest reaches an interior quality perception of some luxury vehicles carrying northward price tag. Other notable advancements in the 2012 Quest’s interior are its power folding 3rd row seats, which folds flat into the floor. Driver seating positioning is also a plus for the new Quest, which I find much more versatile than that in the new Honda Odyssey. Even the anti-pinch weather strips (doors automatically reverse when pressure is detected) on the power sliding doors and power rear lift gate assure that your precious little-ones do not get their fingers caught. The 2nd row seating is also among the easiest to adjust for quick 3rd row entry and exit. 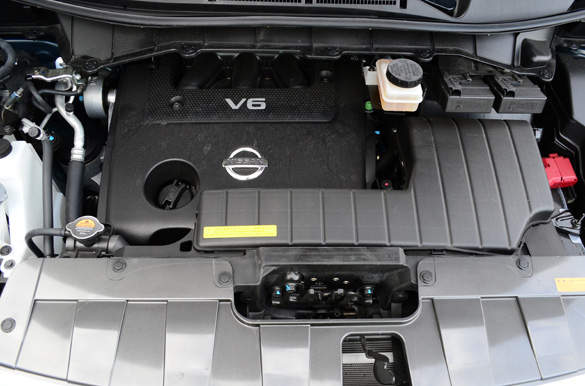 Obviously, performance is not the specific attribute to a Minivan that consumers look for, however, it is very relevant considering when you add upwards of 7 passengers you will need some oomph. The new 2012 Nissan Quest utilizes the same 3.5-liter V6 engine found in many other Nissan vehicles. From the redesign in 2011, the Quest continues to mate its 260 horsepower and 240 ft-lbs. of torque V6 engine to a CVT (Continuously Variable Transmission). I have had my differences with CVT transmissions over the past and I still cannot get over the odd but smooth transitioning of power on CVT equipped vehicles. Nissan has pioneered the CVT and leads the pack for responsiveness, reliability and on-demand-power. The latest versions of Nissan’s CVTs are even better, which shines in the new 2012 Nissan Quest’s performance capabilities.

By now you know that you will never win any races in a Minivan especially in the case of toting around over 4,500 pounds plus any additional precious cargo. The 2012 Nissan Quest stacks up nicely right along-side the Toyota Sienna and Honda Odyssey in terms of performance. Where the 2012 Nissan Quest falls short is its lesser cargo space and a maximum of 7-passenger capacity/configuration instead of offering 8-seating capability. Towing capacity for the new Quest is set at a reserved limit of 3,500 pounds. 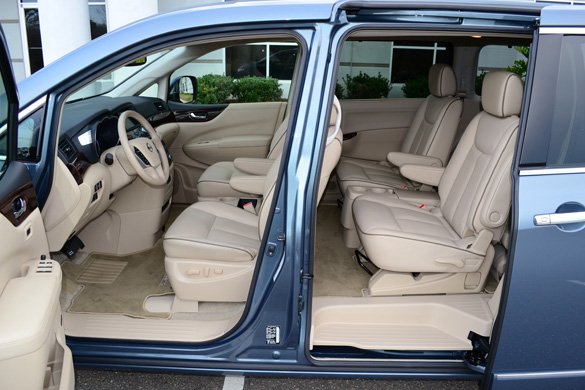 Being that I am more of a sports-car kinda guy, I tend to verbally divulge my disposition when having to drive a Minivan in rush-hour traffic. In my endeavor of expressing choice words to other drivers, I found that most of the hoopla was due to the fact that most of the driving public thinks that all Minivan drivers drive slow and reserved. Boy were these folks in for a treat of 2012 Nissan Quest exhaust fumes!

Surprisingly, driving the new 2012 Nissan Quest can be a temporary enjoyable experience for an enthusiast provided you have a straight road to navigate. I say that because, even though the new 2012 Quest has a good passing power, you put it into a hard turn and the 235/55/18-inch all-season tires start barking like a hound dog. In other words, the Nissan Quest’s suspension and vehicle weight has no business being put anywhere near its limits. Although, the 2012 Nissan Quest’s suspension proves to be a bit more sporty than many of its competitors. Of course that does not say much when you are still talking about a Minivan. 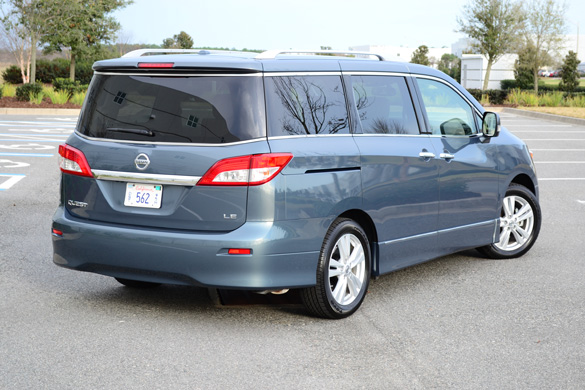 The 2012 Nissan Quest is available in 4 different trim levels, S, SV, SL and LE.  My Quest LE test vehicle comes as-is with just about every option including the DVD entertainment system; the ultimate necessity when you have little ones in the rear passenger seats. The optional dual-pane sunroof was one of the options missing from the equation that I adorned during my last review of the 2011 Nissan Quest. 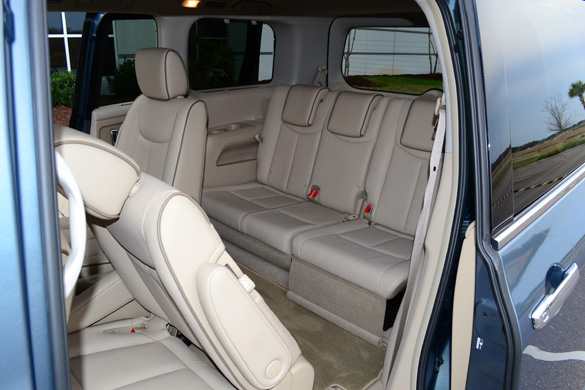