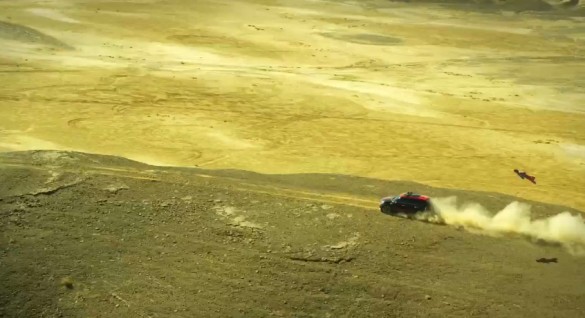 The MINI John Cooper Works Countryman may be the most appealing car the brand has ever created. It’s got 211 horsepower and 207 pound-feet of torque, it comes standard with all wheel drive and there’s plenty of room for three friends and a reasonable amount of gear. It even looks right, and you can point out to your friends that a (heavily modified) Countryman won Paris-Dakar this year and even had a few podium finishes during last year’s WRC season.

As good as the upcoming John Cooper Works Countryman may be, attempting wingsuit flight behind one isn’t going to end well. In fact, we’d bet that it would end very, very badly, whether or not you attempt to launch your flying friend off a cliff. We’re sure the video is faked, using either a balloon shaped like a guy in a wingsuit or perhaps some creative video editing. In any case, what’s most surprising is that MINI doesn’t give the standard disclaimer about “not trying this at home.”

That may fly (no pun intended) in Europe, since any court in the EU would deny a personal injury case based on replicating this stunt. Here in the land of litigation, however, it’s probably just a matter of time before someone sues MINI after trying to duplicate the stunt seen here. Let us be the first to advise you, then: the video is faked, so don’t try this at home.