Forget The Escalade, Give Me An MRAP 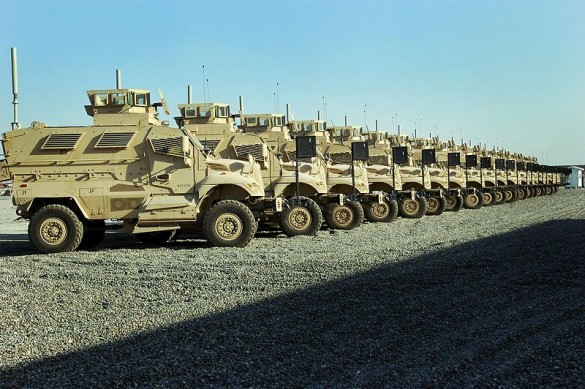 As the conflicts in Iraq and Afghanistan began to ramp up, one thing became clear to the U.S. military: the venerable HMMWV (or Humvee, for short), wasn’t safe for troops facing roadside bombs. Development of a “Mine Resistant Ambush Protected” vehicle, or MRAP for short, became priority number one to protect troops in combat zones. In 2007, a total of $1.1 billion was budgeted for the purchase of MRAP vehicles for deployment.

The move had a huge impact on troop safety, and by June of 2008 roadside attacks and U.S. troop fatalities had decreased by some 90-percent. The MRAPs, with their thick armor plating and blast-deflecting hulls, were doing exactly what they were supposed to do: saving the lives of U.S. soldiers in combat.

Fast forward to 2012. We’re out of Iraq, and we’ll be handing the keys back in Afghanistan in 2014, which leaves the military with 20,000 MRAP vehicles it no longer needs. Their weight (over 14 tons each) and sheer size make them impractical to deploy to areas where thick armor and blast protection isn’t needed. As CNN (via Autoblog) reports, the best option is to use the trucks for land mine clearing and bomb disposal, but the military doesn’t need 20,000 MRAPs for that purpose.

For now, the trucks will be parked in storage, reserved for future conflicts where IEDs are a potential problem. If history is any indication, the military won’t hold on to this surplus for long, although we’re not sure if the general public will be allowed to purchase such an impenetrable vehicle at auction. We think they’d make the ultimate platform for a recreational vehicle, allowing owners to sleep in bear country (or anywhere else they chose) without a second thought.