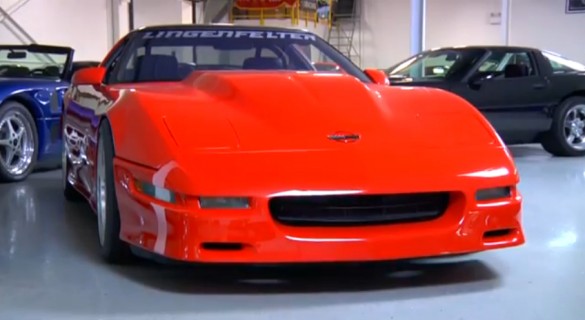 When we grow up, we want to be Ken Lingenfelter. Not only does he own Lingenfelter Performance Engineering (which was founded by a cousin, John Lingenfelter), but he also has one of the most impressive car collections in the United States. How many cars are in the collection? Even Ken doesn’t know for sure, saying “about 200,” since he’s afraid to give an exact count.

While the collection is heavy on Corvettes (which make up about 40% of the total), there’s something for everyone. Want a Ferrari F40, a DeLorean DMC1, a Vector, an Opel GT, or a mid-seventies Pontiac Can-Am? No problem. A Bugatti Veyron or an original AAR ‘Cuda? Yeah, they’re in the collection, too.

This episode of Big Muscle centers on one of the most significant cars in the collection, which host Mike Musto refers to as “ground zero” for hot rodders. Lingenfelter owns the Duntov Test Mule EX-8, which was the first Corvette to be tested and evaluated with a small-block V-8 engine. Without this car and its small block Chevy V-8, the Corvette may never have survived beyond the first generation, and hot-rodders may never have embraced a Chevrolet V-8 engine.

Mike spends some time in a Lingenfelter-tuned 1993 Corvette ZR1, too, capable of producing upwards of 600 horsepower. It’s got a rather unique valet key, and unlocking the car’s full power is akin to twisting the two keys needed to launch a nuclear missile. It’s as subtle as an artillery barrage, and makes an impressive statement on how much power was possible from a street-legal car, even back in 1993.