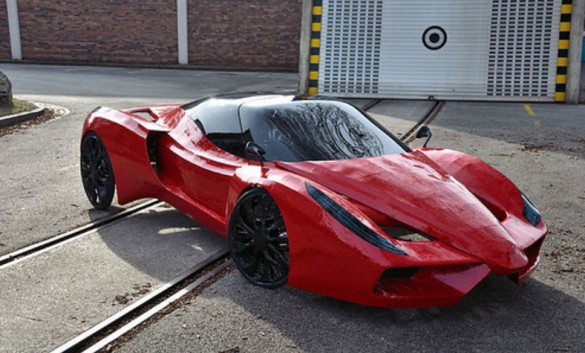 It is interesting to know we live in a world where there are still people fortunate enough to have an over-abundance of time on their hands. They have so much of it they tend do something completely out of the ordinary. In the case of the folks who brought us the Ferdinand GT3 RS, a bicycle powered and custom framed Porsche 911 GT3 RS replica, comes a new creation what looks to be modeled after the Ferrari FXX (Race-prepped Enzo) dubbed the “FAHRRADI Farfalla FXX”.

The name, FAHRRADI, is a combination of the German word “Fahrrad”, meaning bicycle. The new design of this “bicycle Ferrari” is actually a slight advancement over the Ferdinand GT3 RS predecessor with better ventilation and a butterfly gear mechanism for the gull-wing-type doors. You could think of this as the most environmentally friendly Supercar on the planet, which keeps you in shape at the same time. 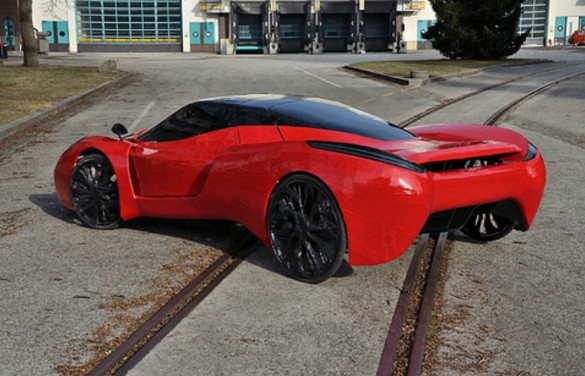 The creativity of the guys (Mimikcry) that came up with this concept have an interesting sense of humor. The video below demonstrating the new FAHRRADI FARFALLA FXX is a total mockup of the infamous Mercedes-Benz SLS AMG tunnel commercial. You must watch it for yourself for the full “effect”.

Hit up the full release and video of this eccentric creation below! Enjoy!

(definition: FAHRRADI – is a combination of the German word “Fahrrad”, which means bicycle, and “i” which is borrowed from the Apple society.)

Following the tremendous success of the predecessor object “Ferdinand GT3 RS”, the current model “FAHRRADI Farfalla FFX” is an attempt to further develop the concept of the mimicry encasement based on muscle-driven drive technique (muscle car) in an evolutionary manner.
Unlike Ferdinand, however, the Fahrradi is not a copy of an existing car model, but rather the anticipation of a future top model of an actually existing automobile brand.
The external form of the vehicle is the result of Internet research into various real and fictive design ideas about what this vehicle could look like, but also our own ideas of design and, not least of all, a substantial portion of clairvoyance.

Another substantial difference to the predecessor model is a built-in butterfly mechanism. An angle gear attached to the rear axle moves the wing doors while driving, resulting in a wing beat similar to that of a butterfly (Farfalla in Italian).
This ensures that it is possible to lift off slightly from the ground at all times (= anti-gravitation).
An even better ventilation of the interior is a side effect.

The next innovative step was the attempt to further constrain the already extreme slowness of the predecessor Ferdinand through an even greater transmission ratio. This makes the Fahrradi a serious rival for pedestrians in street traffic as well.
By (Austrian) law, the Fahrradi can be driven at any time on public streets.
Night-time use is ensured by a modern lighting system based on approximately 200 ultra-bright LEDs.

Along with the Ferdinand GT3 and the Veyron UC, the Fahrradi is part of the racing sport team MT RACING, founded in 2011.
MT – Mikadotrochus (Latin) or Millionaire’s Snail avoids shallow waters. The habitat of this snail in the depths of the ocean is so difficult to access that it turns this individual into an extraordinary delicacy.