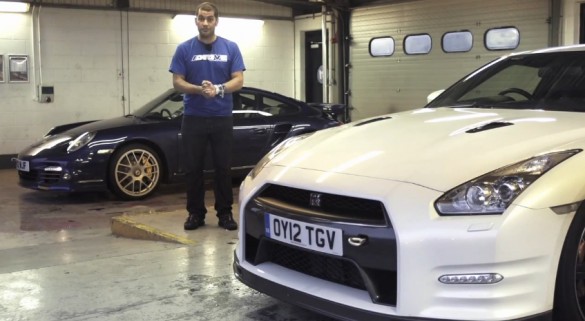 Even in base form, the Nissan GT-R is almost unbelievably quick, and blessed with the kind of handling limits that few owners will test, even on track days. While we get the “Black Edition” in the United States, with extras like lighter Rays Wheels and a carbon-fiber rear spoiler, we don’t get the “Track Pack,” which is reserved for the right-hand-drive markets of Japan and Great Britain.

In Britain, the Track Pack adds nearly $16,000 to the cost of a GT-R, and on the surface it’s easy to question where that money was spent. The car gets lighter wheels (same as the Black Edition cars, as far as we can tell), a stiffer suspension, brake cooling ducts, sticky seat fabric and a rear-seat delete to save weight. Customers can even have the suspension set to road (less negative camber) or track (more negative camber) by their dealer.

It may not seem logical to benchmark the Nissan GT-R against Porsche’s uber-grand-tourer, the 911 Turbo S, but Harris makes a pretty good argument for the comparison. Cost difference aside (in Britain, the Turbo S costs some $71,000 more than the GT-R Track Pack), both cars have force-fed engines that produce over 500 horsepower and both feature all-wheel-drive. Both cars shift via flappy-paddle gearboxes, and both feature adjustable suspensions and variable stability control.

In the end, Harris gives a fair assessment of both cars, and we have to agree with his summation. Which is the winner? Watch Harris flog both cars on a wet Brands Hatch racetrack to find out.