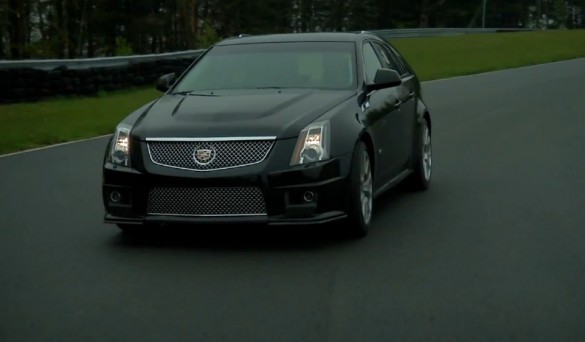 Nowhere is it written that muscle cars must be ancient relics, stuffed full of carburetor-fed, hydrocarbon-belching V-8 engine and fitted with the kind of primitive suspensions usually found on farm wagons. There are plenty of muscle cars available from new car dealers, like anything with an SRT badge, the upcoming Chevy SS and the Cadillac CTS-V series.

Most discussions of muscle cars don’t extend to station wagons, either, but the CTS-V wagon is equally adept at hauling groceries, hauling the family or just plain hauling ass. Unlike that Buick Roadmaster wagon your grandfather owned, the CTS-V wagon handles as well as anything with the mass of a small planet can, thanks to both its Magnetic Ride Control suspension and the electro-wizardry of stability control.

On a dry track, the CTS-V is quite a bit faster than you think it will be. Throw some rain into the mix, and the weaknesses of 556 horsepower sent to two wheels only, coupled with a long wheelbase, begin to become apparent.

Enter the BMW X5 M, which exists in the category of “Uber SUV” alongside rides like the Porsche Cayenne Turbo and the Jeep Grand Cherokee SRT 8. Like the CTS-V wagon, the X5 M is a lot faster than you’d expect it to be, and it’s M-tuned stability control and all-wheel-drive system don’t care much if the track is dry, wet or somewhere in between.

Which is the best choice for a family hauler? That all depends on geography, budget and expectations, we suppose. If you live where snow isn’t an issue and favor wagons over SUVs, the CTS-V wagon will save you around $25k compared to the X5 M. On the other hand, if you deal with snow in the winter, the X5 M may be worth the price of admission.

One thing is absolutely certain, though: you can’t go wrong with either choice.