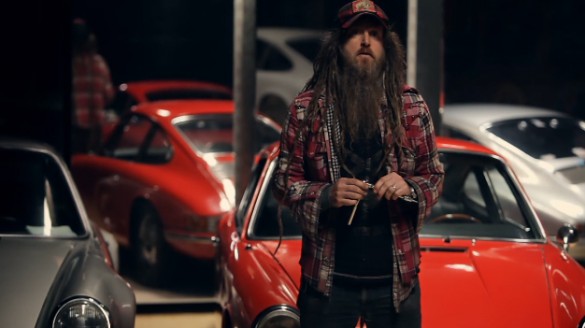 When we say the phrase “collector of Porsche 911s,” what comes to mind? Clearly, there’s wealth involved, so it’s logical to expect a certain level of careful grooming and attire; after all, it’s easy to upset other members of the tennis club if your appearance isn’t as they expect.

Magnus Walker, part of the pair behind Serious Clothing, isn’t your stereotypical Porsche collector. At first glance, he looks more like a hardcore biker or a long-time rock -band roadie than a classic car collector and fashion designer. In fact, with his weathered appearance, chest-length beard and dreadlocked hair, Walker is the kind of guy that most people would cross the street to avoid running into, especially late at night.

Walker is also a very serious collector of early Porsche 911s, with a goal of owning one example of each model built between 1964 and 1973. So far, he’s got every year covered through 1972, and clearly knows his way around a workshop.

The video below, found on Autoblog, is a short trailer for an upcoming film by Tamir Moscovici entitled “Urban Outlaw.” We’ll admit to being captivated by Walker’s story, so we’ll be sure to follow up when the film is released.