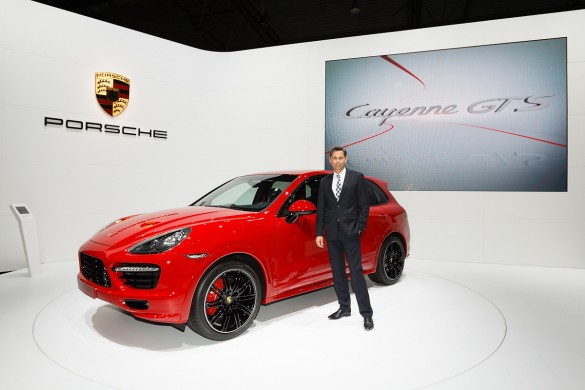 The Leipzig Auto Show, known as Automobil International (AMI), may lack the prestige of a Paris Motor Show or a Frankfurt Auto Show, but it’s still a key event for Porsche. After all, Porsche’s factory in Leipzig builds the Cayenne SUV, and is in the midst of a major expansion to begin building the upcoming Macan SUV. In other words, Porsche wants to make a statement that Leipzig, both as a city and as a show, is important to Porsche.

Enter the Porsche Cayenne GTS, which is being debuted at this week’s AMI. Like other GTS models, it’s meant to bridge the gap between entry level vehicles and more performance-oriented (and pricier) options. In keeping with GTS tradition, the Cayenne GTS gets a 4.8-liter V-8 engine rated at 420 horsepower (20 horsepower more than the Cayenne S), mated to an eight-speed automatic transmission.

There’s no word yet on pricing or when we’ll see the Cayenne GTS stateside, but we’d say within six months after its European launch. The Cayenne sells well here, and offering a “just right” in-between model will help Porsche to grow sales in the U.S. market.