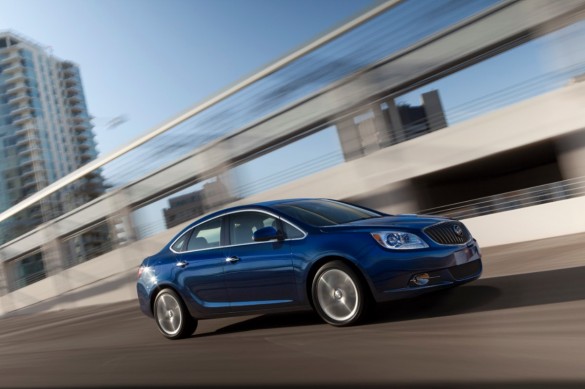 Wrap your head around this for just a second: Buick is about to add a second car to its lineup with a turbocharged engine and an available six-speed gearbox. Buick, the once-stodgy brand associated with retirees, early buffet dinners and Sans-A-Belt slacks has taken a turn to the dark side, filling in the entertaining-car gap (or at least attempting to) left by Pontiac’s departure.

When it hits dealers later this year, the Buick Verano will boast 250 horsepower and 260 pound-feet of torque from its Ecotec 2.0-liter engine. That’s good enough to send the compact sedan from 0-60 mph in an estimated 6.2 seconds, which makes the Verano Turbo quicker than its big brother, the Buick Regal GS. The most observant readers will quickly point out that the same engine, when installed in the Regal GS, produces 270 horsepower and 295 pound feet of torque; in other words, there’s plenty of room to make the Verano Turbo even quicker.

Buick isn’t commenting on fuel economy of the Verano Turbo just yet, but the Regal GS delivers 19 mpg in the city and 27 mpg on the highway. The Verano Turbo will be smaller and lighter, so expect it to deliver slightly better fuel economy than the Regal GS. Pricing hasn’t been set yet, either, but we’d expect the Turbo variant to add about $2k to the $23,875 price of the mid-level trim Verano.