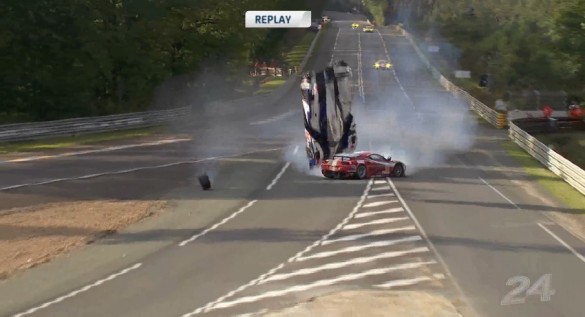 Another 24 Hours of Le Mans is in the record books, and Audi has returned to its utter domination of the sport. As the clock ran down on the final lap, four Audi e-tron Quattro LMP1 racers crossed the finish line in formation, grabbing all three podium spots and fourth place, too, just for good measure.

Early in the race, however, it looked like Toyota’s hybrid LMP1 cars would give the Audis a serious run for their money. The Toyotas posted the fastest segment time down the Mulsanne Straight, but they lacked one ingredient necessary to win at Le Mans: just a bit of luck. By the end of the first day, both Toyotas would be retired with crash-related damage.

Four hours into the race, a Toyota LMP1 driven by Anthony Davidson attempted to pass a Ferrari GTE car driven by Pierguiseppe Perazzini as the cars approached the Mulsanne Corner. Perazzini apparently didn’t see the LMP1 car closing, and turned into the Toyota as it passed: the two drivers made contact at high speed, and that was enough to upset the airflow over both cars.

Davidson and Perazzini both had huge impacts with the tire barrier, which was able to dissipate enough energy to prevent more serious injuries to the drivers. Both were able to climb from their wrecked cars, and subsequent medical attention revealed that Davidson had suffered two fractured vertebrae in his back. A full recovery for Davidson is expected in less than three months.

This crash marks the second such incident in two years, bringing into question the wisdom of allowing pro and amateur drivers, in cars capable of vastly different speeds, to compete side by side over 25 hours. Tradition is one thing, but safety should always take priority.