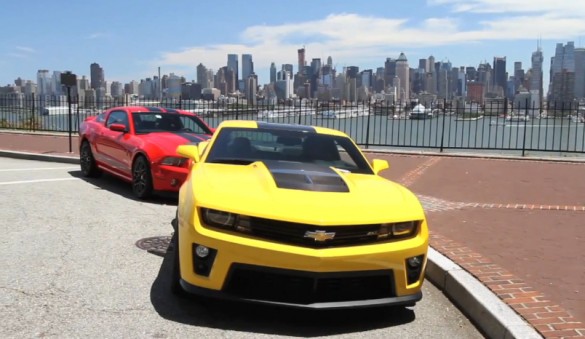 Generally speaking, car reviewers from Europe or the U.K. view American cars with great disdain. “Too big,” they cry, or “too softly sprung,” or “too poorly bolted together.” In decades past, we’d have had a hard time countering their argument, replying only, “yes, but at least we’ve perfected the electrical connection.”

These days, no one selling cars in the United States builds a bad product. Even our blue-collar sports cars (muscle cars, actually) like the Ford Mustang and Chevy Camaro have improved to the point where you can take properly-equipped models from the showroom to the track and turn some truly impressive lap times. Unlike the muscle cars of old, the new generation comes packing suspension, brakes and cooling systems that work as well as the obligatory big V-8 engine under the hood.

You’d still think that elitist journo Chris Harris would be like a fish out of water behind the wheel of the 2012 Camaro ZL1 and the 2013 Shelby GT500, especially slogging through Manhattan traffic. He’s not, and we find him strangely complementary of both cars in the video below. We won’t spoil it, but we’ll tell you this much: one is more refined and better for use as a daily driver, while the other is harder edged, and ultimately leaves Harris wondering how he can export a copy to Britain. We’ve known all along that the new Mustang and Camaro are great cars, and now it looks like the rest of the world is beginning to figure this out, too.