Honda And Mugen Build A CR-Z We Can Love: Video 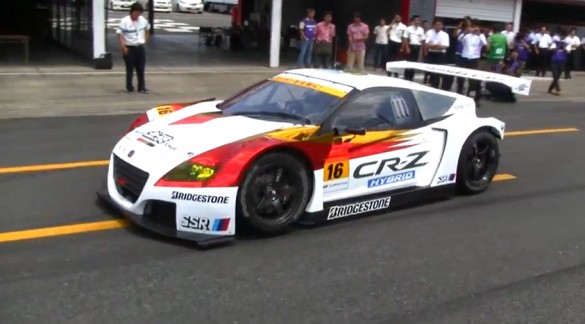 To steal a quote from Mazda’s ad for the new CX-5 crossover, the Honda CR-Z is the rolling embodiment of compromise. Designed to be a “sports hybrid,” the CR-Z is far too numb and underpowered to be even remotely sporty, yet it isn’t particularly fuel-efficient, either. As the spiritual descendent of the much revered CRX, the CR-Z admittedly had some big shoes to fill; still, we suspect the car would be more successful if Honda had focused on either sport or economy, without trying to address both.

To go racing in Japan’s Super GT Series, Honda and Mugen have built a CR-Z to run in the GT300 class. Equipped with a twin-turbo 2.8-liter V-6 mounted amidship, the car also benefits from a Honda Racing hybrid system to provide supplemental power. We suspect the the engine and hybrid driver power the rear wheels, although we suppose the hybrid drive could have electric motors powering front wheels for added grip.

The GT300 class limits cars to 300 horsepower, so we’re fairly certain that’s what this purpose-built CR-Z puts down. We don’t have much interest in the current CR-Z, available at your local Honda dealer, but a mid-engine, rear drive CR-Z with 300 horsepower is something else entirely. We know we can’t have one, and that only makes us want it more.