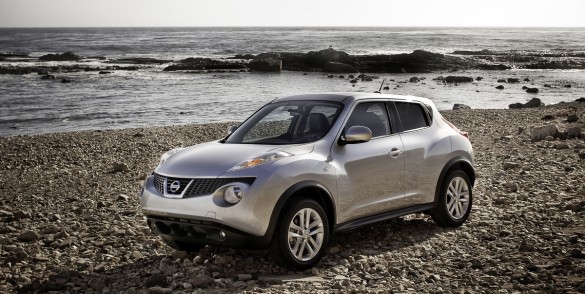 Nissan’s product line attempts to have something for everyone including the young enthusiast who tends to have a need for utilitarian versatility. To focus in on that demographic, Nissan introduced the Juke just last year with a different approach initiating from its somewhat eccentric styling. The new 2012 Nissan Juke, virtually unchanged from last year’s model, continues to serve up its lively performance in a peculiar looking, yet affordable, small crossover package.

In my recent adventure driving the new 2012 Nissan Juke SV FWD, all I could think about is how much of a mixed bag of endearing attributes this vehicle had. Having a mixed bag of qualities is not always a bad thing, especially considering how the Juke blends the mix so well. 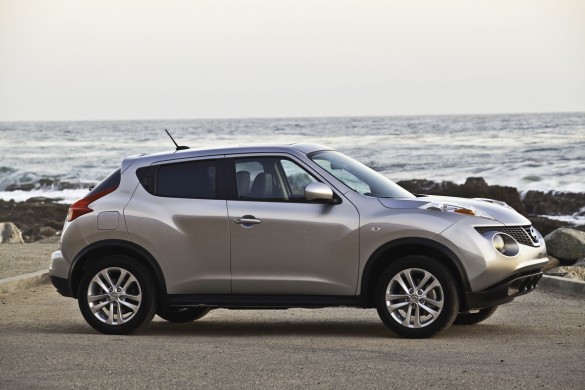 If there ever was a gap between small crossover SUV’s and hatchbacks, the Nissan Juke fills it. I welcomed the new 2012 Nissan Juke into my driveway with an open mind to at least give the funky looking hatch a chance. After driving it for a couple days, my initial perception was changed towards a more positive outlook. For starters, the Nissan Juke has an agreeable 1.6-liter turbocharged 4-cylinder engine. It gives the crossover-hatch enough grunt to keep you entertained. Moreover, little dashboard gadgets such as a center color LCD screen for the auto a/c and heater controls along with a unique driver-select performance program, reiterates the Juke’s target demographic. The exterior styling by itself should have already been a nod to the Juke’s target demographic, with it being youngsters and teens. 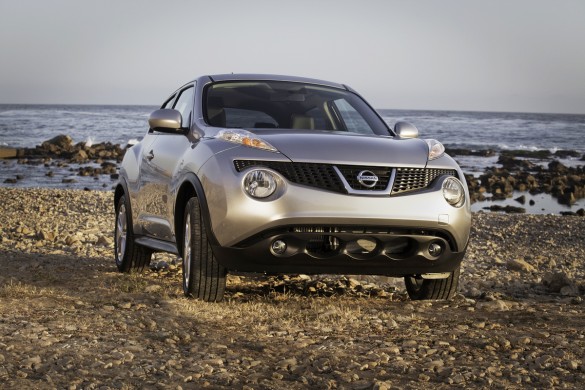 Exterior styling, as suggested previously, is a funky mix of a GT-R’s slanted angle roofline, 370Z inspired taillights and large rally-fog-light-sized headlights to top things off. If you can get past the peculiar looks, the Juke is not a bad vehicle at all. On the outside you will also find standard 17-inch alloy wheels and an elevated ride height when compared to other hatchbacks. 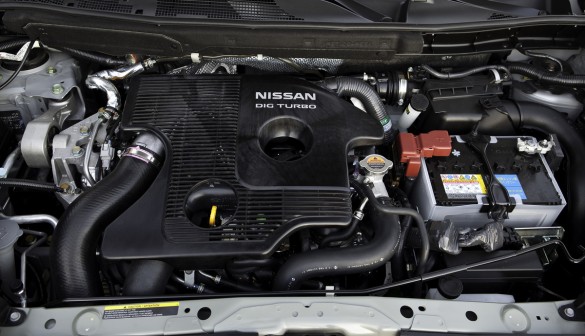 For a hatchback that has its feet playing in the small SUV pool, it tends to have sporty handling attributes combined with an eager engine. The 1.6-liter turbo 4-cylinder engine puts out a decent 188 horsepower and 177 lb-ft of torque. Max torque comes on as early as 2000 rpm. However, some of that low-end grunt is somewhat sapped by the CVT (Continuous Variable Transmission). Though, Nissan tends to be on top of the food chain when it comes to CVT transmissions, the Juke may benefit performance-wise from the optional 6-speed manual transmission. The new Nissan Juke, being offered in 3 different trim levels (S, SV and SL), gives those who opt for the SV or SL trim the option of selecting a 6-speed manual transmission. My test vehicle was equipped with the CVT, but I would imagine the 6-speed manual being a much more enjoyable experience for enthusiasts. Not to mention, power output to the front wheels, or all four wheels through an optional all-wheel-drive system, would better-equip CVT-equipped Juke models for questionable road surfaces.

On the road, the new 2012 Nissan Juke has a firm ride and remains stable at all legal speeds. At times the ride seems to be a bit too harsh but the payoff is its balanced handling. The Juke is no sports car by a long shot, however, it handles its relatively light 2900 pound curb weight quite well. Through the somewhat gimmicky I-Con center control unit with the color LCD screen, you are able to set three different drive modes, Eco, Normal and Sport. Starting off in Eco mode, the CVT transmission keeps RPMs low and the steering feel is reasonably light. Going into normal mode, steering feel is about the same as in Eco where the CVT transmission and engine response is on a level playing field. In Sport mode, where things get interesting, the engine seems to be more responsive due to the CVT’s advanced mapping giving you virtual gear changes at or near full throttle. Basically, the CVT transmission will automatically pre-set RPM ranges to act as gears – dropping engine speed in 1000 RPM increments as if it was shifting cogs. Visually and audibly, it seems the Juke performs better in Sport mode, but from test numbers it proves otherwise. Sport mode also adds needed weight to the steering feel. 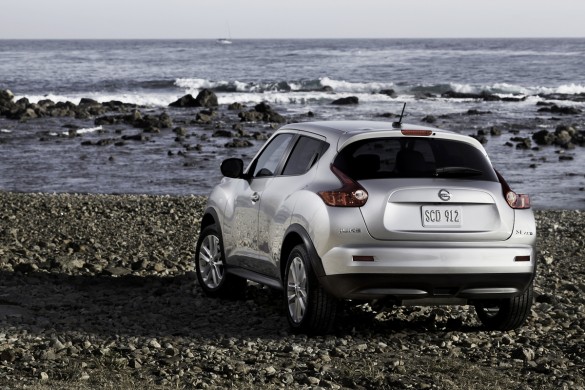 Regardless of the mode, my CVT-equipped 2012 Nissan Juke suffered from a dismal initial acceleration. Having a CVT transmission mated to a turbocharged engine is not a nice combination until the engine reaches at least 2000 rpm, a range that the CVT does not allow until a couple seconds into accelerating from a dead-stop. This is where the 6-speed manual will most certainly shine for the sporty Juke.

Comfort in the front of the Juke’s cabin is good. The rear seating area, coming up extremely short in legroom, headroom and shoulder room, is a hard pill to swallow if you are considering a Juke to haul a family of over 2 around. Rear cargo room is surprisingly usable and gives you just enough space to stack 4 medium sized suitcases on top of each other with a bit of extra room to spare. 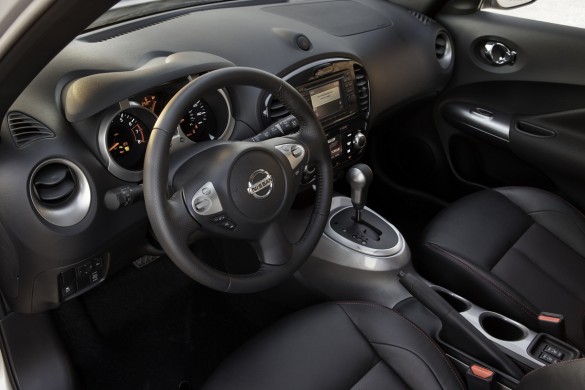 Seat comfort is about average, but the cloth surface stitching patterns are more of an acquired taste. Rear visibility is somewhat diminished from the low rear roof line but proved to be manageable in most situations.

The 2012 Nissan Juke, proves to be a nimble hatch with a small SUV demeanor. With the new Juke, versatility is more apparent within it’s list of standard and available options such as an enthusiast sought-after 6-speed manual transmission, touch-screen navigation system, automatic air conditioner controls, selectable driver modes, a graphic G-force meter and generic boost gauge, intelligent key with push-button start and a leather-wrapped steering wheel.  Taking the Juke off-road is probably not on the mind of potential buyers. However, an optional all-wheel-drive system makes the Juke an attractive buy where it is not normally offered in the hatchback segment.

Fuel mileage figures for the new 2012 Juke start with 27 mpg in the city and reach a consistent 32 mpg on the highway. During my city driving, I had the surprising need to re-fill the tank traveling just over 200 miles. This was mainly due to the smallish gas tank only holding 13.2 gallons of fuel. 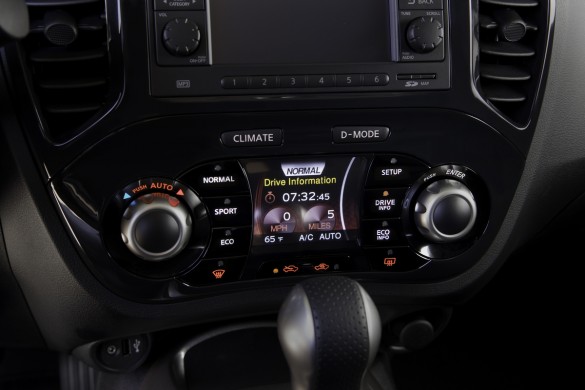 My 2012 Nissan Juke SV test vehicle, with the only added options of carpeted floor and cargo mats, has an as-tested price of $22,515 including $760 destination charge.

As a side note for enthusiasts, Nissan has made plans to introduce a sport-tuned Nismo version of the Juke with increased power, sportier handling, larger wheels and unique exterior accents. No word on official release date or detailed specifications.