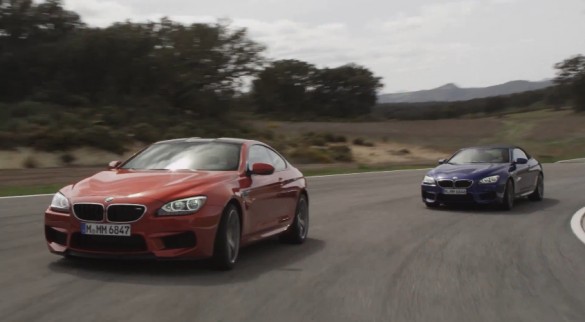 BMW’s all-new M6 should already be hitting U.S. BMW dealerships in convertible form, with the coupe set to arrive here in September. To make sure that fans and prospective buyers don’t lose interest, BMW has just released a video showing the M6 Coupe and Convertible dicing it up on the racetrack and scenic European roads. BMW refers to its 560-horsepower grand touring coupe and convertible as “sporty”, but we’d be willing to bet it offers up a bit more performance than that. Despite its bulk, the M6 has traditionally be quicker than you’d expect at the hands of a talented driver.

Providing thrust is a 4.4-liter, twin-turbo V-8 rated at the previously mentioned 560 horsepower. Shifting is handled by a seven-speed, M-Double Clutch transmission, which sends power to the traction-optimizing Active M Differential. The combination is good enough to get the coupe from 0-100 km/h (62 mph) in 4.2 seconds, with the heavier convertible taking a tenth of a second longer. To ensure fade-free braking performance from triple-digit speeds, BMW is even offering carbon ceramic brakes as an option on the new M6.

Despite the car’s performance capabilities, BMW’s “Efficient Dynamics” technologies increase fuel economy by some 30-percent compared to the previous version, making the car easier to live with as a daily driver. As with past versions, the M6 isn’t the ideal track day toy, but will eagerly swallow up as many highway and scenic route miles as you care to throw at it, at (nearly) any speed you’re willing to travel. That capability comes at price, though: the new M6 Coupe starts at $106,995, with the convertible priced from $113,995.