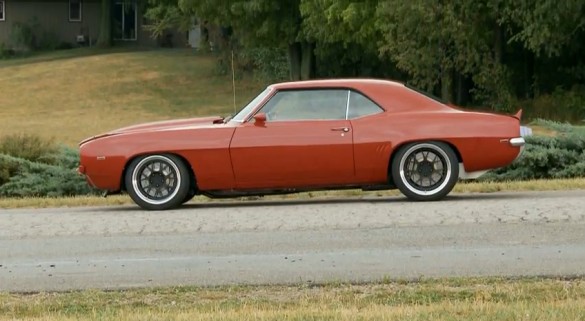 Off the showroom floor, the new Camaro ZL1 will accelerate quicker, stop shorter and carry more speed into corners than any production Camaro we can think of, including the legendary 1969 Camaro ZL1. It comes with a full factory warranty, too, at a price that’s tens of thousands of dollars less than building a comparable car yourself.

What the new Camaro lacks, however, is vintage cool. If you wanted the authenticity of an original Camaro with the performance of a modern one, you could build yourself a Pro Touring car, assuming that money was no object. Enter Mark Stielow, a GM engineer and Pro Touring icon who’s constructed numerous Pro Touring vintage Camaros. Stielow’s latest effort, called the Red Devil, boasts over 750 horsepower from a supercharged LS9 V-8, and comes with a modern suspension (that still retains the car’s live axle), racing-spec brakes and amenities such as an audio system and air conditioning.

Could a heavily-modified 1969 Camaro run with Chevrolet’s latest big dog, the Camaro ZL1, around Michigan’s Ginger Man Raceway? That was the question posed by Hot Rod magazine, who recently hired Stielow to drive both cars for the comparison. The Red Devil puts down over 170 more horsepower while hauling less mass around, but the ZL1 has a wider track and the advantage of performance-focused stability control. Stielow helped develop the ZL1, so he’s on intimate terms with both cars, and a data logging system is used to make sure he’s not sandbagging in either Camaro.

Which is faster? Check out the video below for the answer.