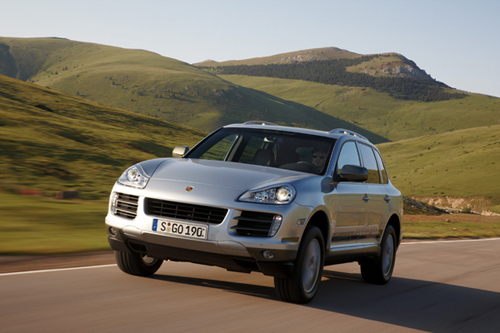 One question for auto manufacturers, such as Cadillac and Porsche… “Why do you plaster big Hybrid stickers and graphics on the side of your new Hybrid SUV’s?”

Okay, so we are not going to elaborate on car graphics today, we will leave that to the Fast and Furious post to do that. Anyway, Porsche has it’s new Cayenne S Hybrid on the road in Stuttgart. So what’s it compromised of? We thought you would never ask.

The current European version of the Porsche Cayenne S Hybrid gets around 26 mpg which is a 25% improvement over the V6 Cayenne. Once the Porsche Cayenne S Hybrid makes its way over the water onto North American land it should be classified as a ULEV II compliant vehicle. That’s good news for the tree huggers who are not suffering in our dwindling economy because ultimately this is still a Porsche and you must pay a Porsche price for this new Hybrid which should add about $15,000 on top of a Cayenne V6’s price. That means it will cost just about as much as a Cadillac Escalade Hybrid around $67K to $70K. So much for “saving” when driving a Hybrid.

The good news about the Porsche Cayenne S Hybrid is that it is truly efficient when it comes to highway driving. Considering a new “feature” called sailing, it adds to the long list of new innovative fuel saving features found in today’s Hybrid vehicles. You can literally sail at certain speeds where the battery will be charged at a certain rate. Think of it as those times when you see traffic ahead and you just coast a bit because you see no reason of rushing to only sit in heavy traffic.