Watch A Ferrari 458 Italia Drive The Greatest Road In The World: Video 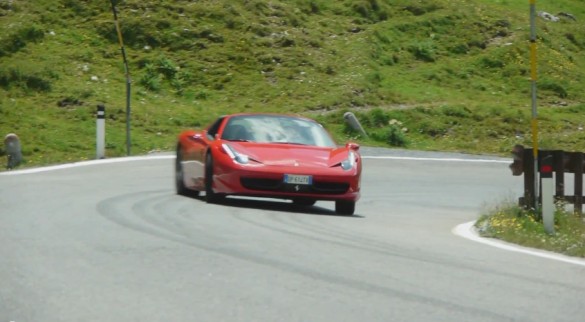 The roads in Northern Italy, just south of the Swiss and Austrian borders, are among the best in the world for drivers. While the entire region offers up an embarrassment of riches, no road is more renown than the one up Stelvio Pass, which was named by Top Gear as “The Greatest Driving Road in the World.”

With some 48 hairpin corners on the eastern side of the pass alone, many linked by relatively long and straight stretches of asphalt, the Stelvio pass will test the handling and braking ability of any car, truck or motorcycle (or bicycle, as the route is often used in Italian cycling events). We’d jump at the chance to drive it a blandmobile rental car, so we can only imagine what its like to drive a Ferrari 458 Italia Spider on it.

Actually, we can do one better: thanks to Car and Driver’s YouTube channel, we can show you video of its European correspondent, Jethro Bovingdon, driving that very car on the Stelvio Pass. It’s eleven and a half minutes of pure Euro-Ferrari-porn, and worth every second of viewing time. Maximize the video, turn up the volume, sit back and enjoy a brief trip to Italy in a Ferrari.