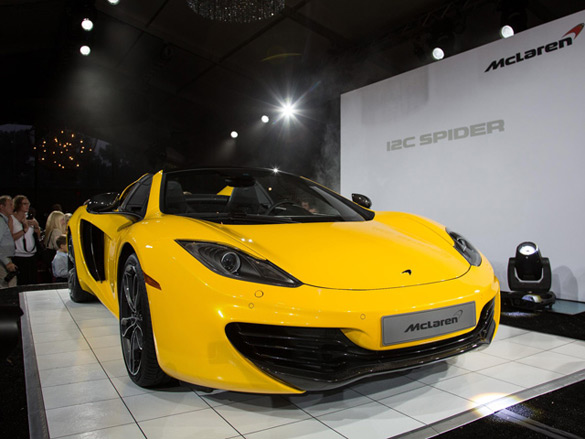 Over the weekend some thought McLaren had completely fallen off of its rocker when they rolled out the X-1 Concept at Pebble Beach Concours d’Elegance. Lucky for us, it was just a one-off vehicle already spoken for that we will probably never see again. Possibly to redeem themselves, McLaren previewed the new 12C Spider, a drop-top version of the popular MP4-12C, alongside of the impressive 12C GT3 Can-Am Edition Concept. 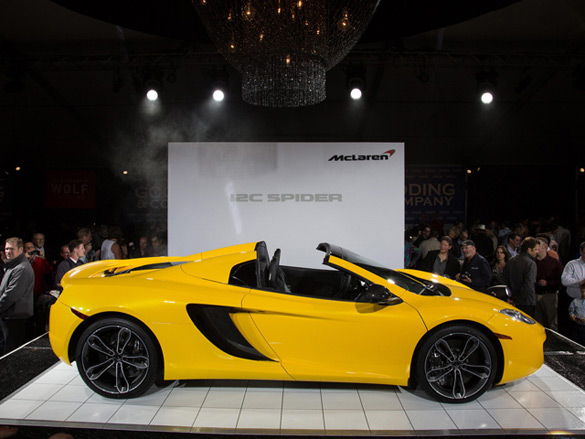 The new McLaren 12C Spider is expected to go on sale in the coming months featuring the same 3.8-liter V8 engine from the MP4-12C mated to a 7-speed SSG dual-clutch transmission. The new 12C Spider will hit an astonishing 204 mph and land a 0-62 mph time in just 3.1 seconds. The 12C Spider also features a 3-piece retractable hard-top folding roof taking only 17 seconds to close without obstructing the view of the engine bay. 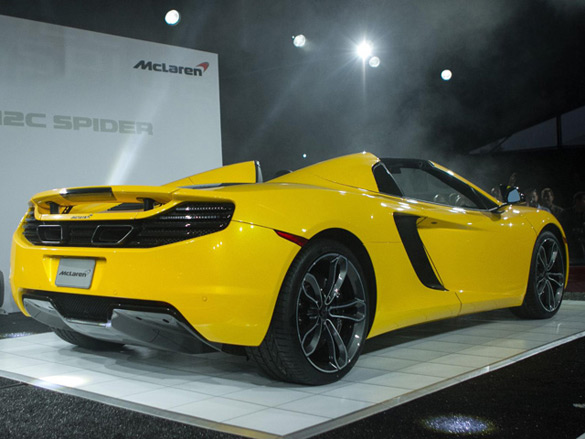 (Monterey, Calif.) McLaren Automotive showed the second model in its growing range of high performance sports cars, the new 12C Spider, for the first time in public at this weekend’s Pebble Beach Concours d’Elegance. The 12C Spider was revealed at the prestigious Gooding & Company Auction preview in Monterey, California on Friday, August 17, then displayed on the Concept Car Lawn throughout the weekend.

The 12C Spider is lightweight with a high-powered engine which boasts 616 bhp, a unique Retractable Hard Top (RHT) folding roof system that can be lowered or raised on the move, and a carbon ‘MonoCell’ chassis identical to that of the groundbreaking 12C coupe. Aside from shared architecture, the 12C and 12C Spider share a unique combination of spectacular performance with remarkable usability.

The new 12C Spider will be priced from £195,500 in the UK and is now available to order from McLaren retailers across the globe. First deliveries to customers are planned for early next year.

The 12C Spider, in new volcano yellow paint, was dramatically revealed with the drop of a Kabuki in front of a crowd of VIP guests attending Gooding & Company’s preview. McLaren received much more interest over the Pebble Beach weekend where the 12C Spider continued to be displayed along with the 12C GT3 Can-Am edition concept.

The 12C Spider’s impressive 616 bhp output from its bespoke 3.8-litre V8 twin turbo engine is transmitted to the car’s rear driven wheels through a 7-Speed SSG dual-clutch transmission, which itself provides lightning-fast gear changes through rocker-mounted shift paddles affixed to the rear of the steering wheel. A clear view of the 12C Spider’s lightweight M838T power plant is available through a glass screen positioned behind the tonneau cover.

Vehicle dynamics technology including Brake Steer, ProActive Chassis Control and the unique McLaren Airbrake combine to offer sublime comfort in all driving conditions; and yet deliver race car performance and handling on track.  An overview of 12C Spider performance compared with the 12C is below:

McLaren is a carbon fibre pioneer. In 1981 McLaren gave a debut to a carbon fibre monocoque chassis in Formula 1 with the launch of the MP4/1 race car, and in 1992 the legendary McLaren F1 introduced the advanced composite technology to the world of road cars. It was natural then for McLaren Automotive engineers to apply its carbon fibre expertise when developing the ground-breaking one-piece molded chassis of the 12C. Its 165 lb ‘MonoCell’ requires no additional strengthening for it to feature in the 12C Spider. The result is a sports car almost identical to its fixed roof equivalent in performance terms, and weighing only 88 lbs more with the addition of a convertible roof system.

Behind driver and passenger sits a rear windscreen which may also be electronically lowered and raised. With the roof lowered this acts as wind deflector to minimise disturbance to the 12C Spider’s occupants. With the roof raised the rear window can be lowered, allowing the exhilarating noise of the 12C Spider’s V8 twin turbo engine to flood the cabin on demand at any time.

With the roof raised the area under the tonneau can be used as an additional luggage area which provides useful storage space. Bespoke luggage (two soft bags) has been designed specifically to fit this space and is supplied as standard with every 12C Spider.

The 12C Spider also features a passive Roll Over Protection System to maximise occupant safety. Each buttress contains a steel structure designed to absorb impact energy and protect both driver and passenger.