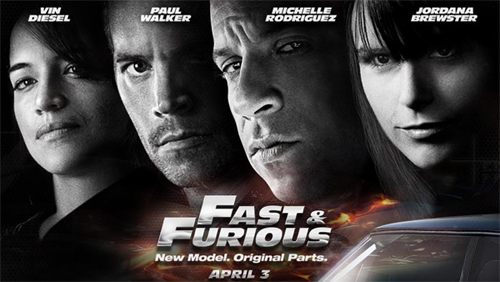 Some have viewed the premier of the newest Fast and Furious movie named, Duh, “Fast and Furious” including ME! Staring Vin Diesel, Paul Walker and Jordana Brewster… this new movie brings about some extra Drama and a nicely put together plot. Some may criticize what I have to say but I can honestly say after getting past the CGI effects and few silly lines, it is a decent movie. I give it 3 and a half stars out of 5. You have lots of serious cars that actually look nice. This time whoever picked out the cars did a great job, by far the best out of all of Fast and Furious movies. I do have a bone to pick with the infamous BMW 5 series said to be an M5 but is clearly a 540i or 528i. I happen to know several friends with BMW’s and they all had a giggle along with me when we watched the M5… ahhhh 5-series drive across the big screen.

Otherwise I just love the crazy unrealistic car moves and the ending leaving an opening to additional installments to the fast and furious to come.

Matt Farah, oddly enough, pretty much goes along with my review as I searched the net finding others who have seen the premier to Fast and Furious.

Guys, all I have to say is… go see this movie if you are a gear-head or what we like to call everyone who visits this site.. Automotive Addicts! This one ranks up with the original part one “The Fast and The Furious” with more realistic parts and just a better movie over-all. I want to get everyone’s opinion on this movie. Post your comments now if you plan on seeing it on opening day or right after.

Garage 419 review on the movie below after the jump…