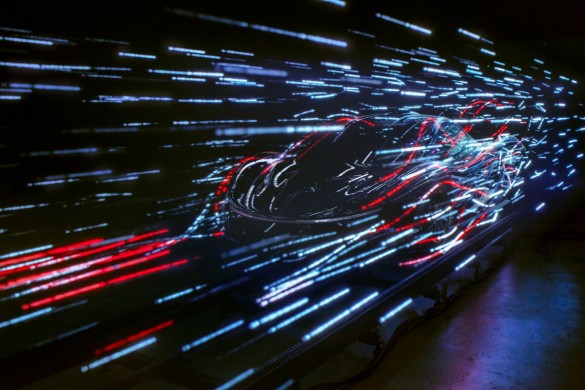 Perhaps the biggest announcement in September’s automotive news will come on September 27, on the eve of the Paris Auto Show. At 17:45 CEST, McLaren will reveal to the world the car that’s generally believed to be the successor to the storied McLaren F1. Rumors about the car abound, but McLaren has been very careful not to let too many spy shots or engineering details emerge. In fact, the clearest image we’ve seen of the car is one above, which uses light to effectively camouflage the car’s appearance.

Rumor has it that the new car will be called the P12, although it’s equally likely that’s just an engineering development name. Unlike the F1, which was powered by a BMW-sourced V-12, the P12 will reportedly use a highly-tuned version of the twin-turbo 3.8-liter V-8 developed in-house for the MP4-12C. To further boost output (at least in short bursts), the P12 is expected to use a variant of the Kinetic Energy Recovery System (KERS) originally developed for Formula One.

We can’t even speculate on performance details, but its reasonable to expect the P12 to be faster than the original F1, and the original F1 was quick enough for 0-60 to give the Bugatti Veyron a run for its money. We’re sure McLaren wouldn’t object to winning the title of world’s fastest production car, even if that wasn’t a specific design goal.

Look for full details to drop on September 27.