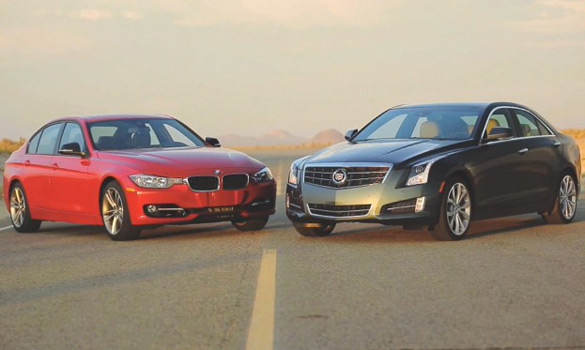 Both are rear-wheel-drive sedans and both have a force-fed 4-cylinder engine. The Cadillac ATS boasts 270 horsepower and 260 ft-lbs. of torque. The BMW 328i has 240 horsepower and 255 lb-ft. of torque. We now know BMW’s power figures are a bit underrated. 0-60 mph times are 6.0 seconds and 5.5 seconds for the ATS and 328i respectfully. The ATS could have had a much better time but was hindered due to a second-gear shift at 55 mph. Quarter mile times are almost the same posting 14.1 seconds at 98.2 mph for the BMW and 14.4 seconds at 96.9 mph for the Cadillac. Specific tests only say so much about these vehicles on paper, so Motor Trend elaborates more on other dynamics of each vehicle and conclude with a winner.

Does the Cadillac have what it takes to compete with the best from Bavaria in an overall battle? Hit up the Head 2 Head video below to find out and be sure to post your opinions and comments below.