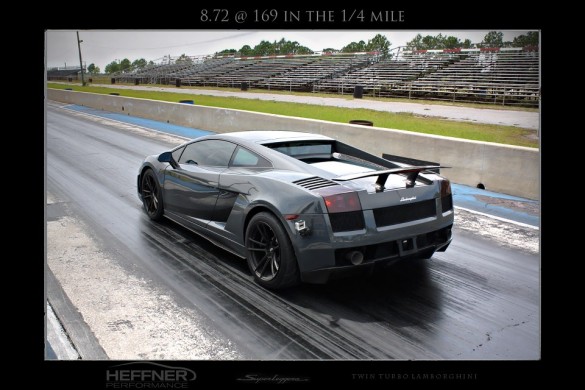 It is almost common-placed to peruse the internet and Youtube for videos featuring ridiculously fast twin-turbo Lamborghinis, especially when it comes to forced-fed Gallardo creations birthed by tuner shops such as Underground Racing and Heffner Performance. One thing that was lacking -was a Lamborghini Gallardo to break 8 seconds in the quarter mile. Usually, running record-breaking quarter mile times is not on the mind of every twin-turbo Lamborghini owner. One exception happens to be a customer of Heffner Performance who had his sights on an 8 second run in his 2008 Gallardo Superleggera. 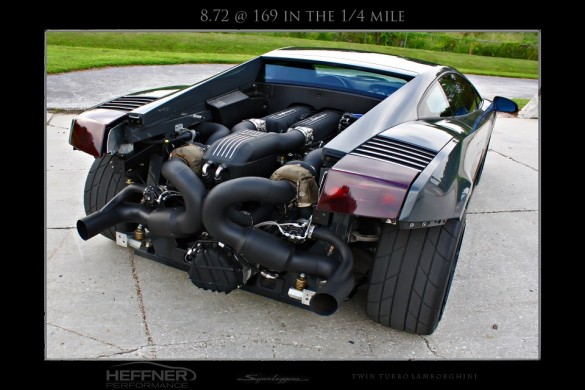 Jason Heffner and his mad scientist team were in for a challenging to please a customer, who happens to be an avid drag racer of exotic cars. No compromise would be made in this build, which required a pair of custom-built ball bearing turbos and MoTec electronics to produce around 1,400 (estimated) wheel horsepower. No this was not Hollywood prepping the latest Fast and Furious film, this was a real test of the engineering foundation of Lamborghini and Jason Heffner’s 14+ years of experience in tuning some of the most exotic vehicles on earth. 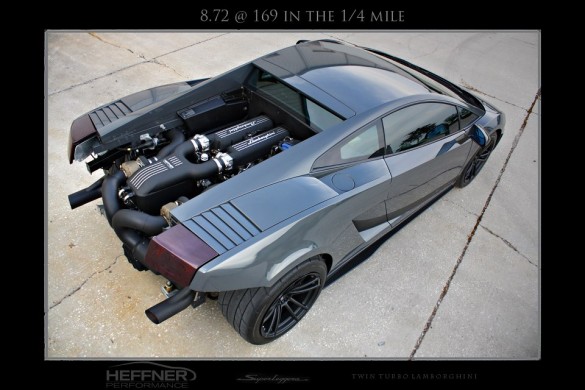 The build for the first Twin-Turbo Gallardo to hit 8 seconds in the quarter mile has been successful so far recently concluding with the best pass out of 8 recorded at 8.72 seconds at 169.8 mph. To our surprise, the owner and Jason’s crew all agree that there is yet even more to be had out of this monstrous twin-turbo bull. They plan on pushing the envelope even further. Be sure to visit Heffnersperformance.com for the latest happenings and build projects to come out of this one-of-a-kind shop.

A few months ago we were approached by one of our customers, who happens to be an avid drag racer of exotic cars, and asked if we could build him a Gallardo that would be capable of running eight second quarter mile times. We formulated a plan and a short while later a gorgeous grigio telesto Superleggera showed up on our doorstep. This car received our full engine treatment with CP pistons, Carrillo billet steel connecting rods, fully ported and polished intake manifold and cylinder heads and upgraded valvetrain components. We are using MoTec electronics to manage every aspect of the engine.

The turbo system makes use of a pair of custom ball bearing turbos that were built by the guys at TIAL products, a four inch downpipe, four inch air inlet plumbing, an incredibly labor intensive custom water to air intercooler and a pair of TIAL wastegates.

When it came to the wheel and tire selection we contacted the guys at ADV.1 who made us an awesome set of 18 inch 5.2.1’s which we finished in matte black and wrapped with four Mickey Thompson radial tires.

The car was driven to and from the track. We made a total of eight passes on the car, each one quicker and faster than the last. By the end of the day we had recorded an 8.72 at 169.8 mph which is quicker than any previously posted time by anyone in the world for a Lamborghini Gallardo.

I would like to thank the team here at Heffner Performance, TIAL Products, ADV.1, Sakata Motorsport Electronics and the crew at Bradenton Motorsports Park for helping make this possible. Most significantly, I want to thank our customer, Shawn (nutcase) for having us build him this incredible machine.

After reviewing the data from yesterday, one thing that we are certain of is that there is a lot more left in this car. I’m pretty sure that I actually had my foot resting on the clutch pedal which caused it to slip a bit in fifth gear. We will be posting more details on this car soon and will keep you all up to date as the car progresses. Thanks and enjoy.