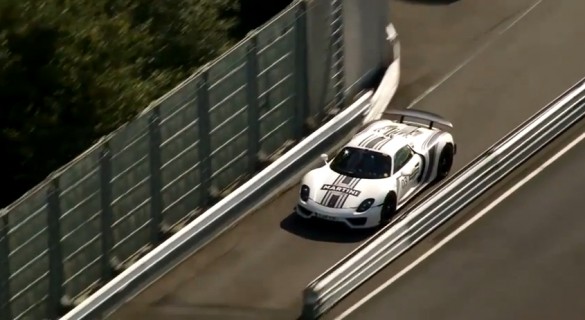 If you’ve spent enough time driving cars on tracks, at speed, it becomes progressively more difficult to climb into the passenger seat of a car and let someone else do the driving. It’s not that you can’t acknowledge there are better or faster drivers, and it’s not that you don’t trust in their ability to drive a car fast, it’s simply that you don’t learn as much about a car’s behavior if you’re not behind the wheel.

If that’s true for us, it’s even more the case for someone like Chris Harris, who has exponentially more seat time in exponentially more cars that we do. By his own admission, Harris hates letting someone else drive, unless the car is a notoriously twitchy and unforgiving Group B rally car. Or, in this case, the upcoming Porsche 918 Spyder, which is arguably the most significant sports car engineering achievement in decades.

In case you’ve missed the hype on the 918, it relies on a parallel hybrid drivetrain to produce some 795 horsepower, yet still return fuel economy comparable to (or better than) many production hybrid sedans. Thanks to a full carbon fiber chassis, it’s relatively light in weight, tipping the scales at 3,740 pounds (3,663 with the Weissach package). Its 4.6-liter V-8 alone produces some 580 horsepower, yet weighs just 308 pounds. Since the car relies on a separate electrical system, the engine lacks any kind of external drive belt, too.

While Harris is impressed with the 918’s performance in both Silent and Race modes, he remains skeptical of the 918’s merits. To be honest, so do we, and we can’t help but wonder how much better the car would be if power came just from the 4.6-liter V-8, and the hundreds of pounds worth of batteries, motors and controllers was left on the assembly line floor.

Perhaps this is the future of sports cars, where those with enough money can get a car that fulfills both the need for speed and the need for environmental responsibility. On the other hand, buying a Nissan Leaf, a diesel Porsche Cayenne and a Porsche 911 GT2 RS would still cost you far less money than a 918, while serving up a better range of options.

If the 918 Spyder is the future of sports cars, perhaps we just need to drink a bit more Kool-Aid to accept that.