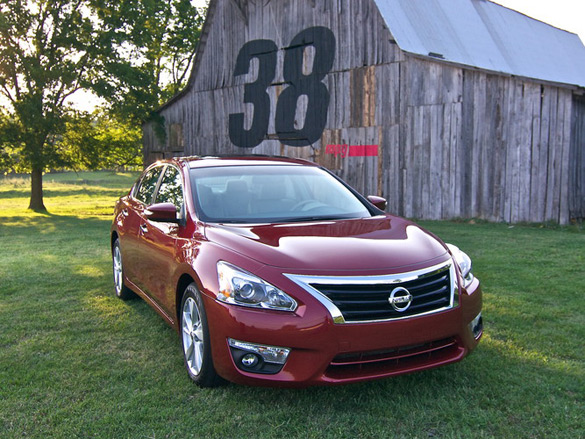 Earlier this year when I had the chance to drive the all-new 2013 Nissan Altima before it went on sale, I was convinced that the bar for the entry-level midsized sedan segment had been raised. Not only did the new Altima portray a fresh new design, but virtually all key characteristics were improved upon. Now getting to spend a full week behind the wheel of the 4-cylinder Altima, it only reemphasizes its upgraded recognition within the exceptionally competitive midsize sedan segment.

The all-new 2013 Nissan Altima gets a complete redesign foreshadowing many distinctive premium design aspects found in luxury counterparts. Just like my initial perception of the new Altima in my first drive article, other midsized sedans have their work cut out to remain in the highlight. Of course there are new breeds from the likings of Honda (Accord), Mazda (Mazda 6) and Ford (Fusion) that all play a major part in keeping the benchmarked expectations high for such a competitive segment. 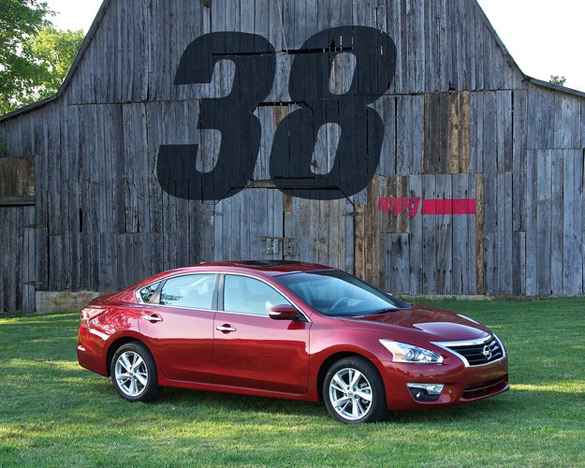 The new 2013 Nissan Altima touts best in class fuel economy estimated at 38 mpg highway. Having a limited amount of time during my first drive of the Altima months ago, it really didn’t give me a chance to put the fuel estimates to the test. Now, having the 2013 Nissan Altima 2.5 SV in my driveway, I had several days to become more acquainted with Nissan’s midsized bread-and-butter.

For the 5th generation, the Nissan Altima is dressed in its best skin yet. The bodylines are somewhat suggestive of more expensive midsized sedans.. The front fascia gets a larger bar-type grill signifying a new look, which will ultimately to trickle down to other Nissan cars. The rear end gets a fresh style with LED taillights as an option on the SL-trimmed 4-cylinder models and standard on V6 trims. Some inspiration from Nissan’s luxurious Infiniti line has found its way on the outside and inside of the new Altima, which is a good thing. 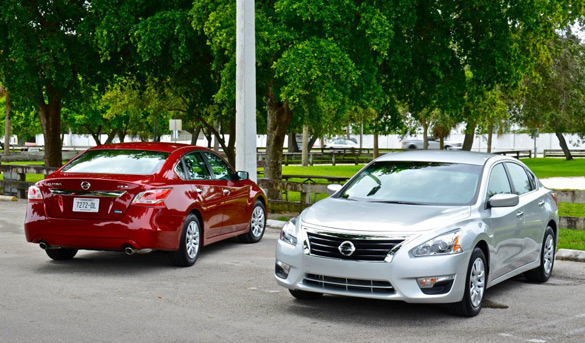 My driving impressions of the new Altima remain to be consistent with my findings when I first drove it months ago. The new 2013 Altima is surprisingly balanced for a front-wheel-drive midsized sedan. Though, as expected, it understeers to keep things relatively safe for the lowest common denominator driver. The suspension is firm enough to prevent excessive body roll and gives just enough to keep things smooth. The new Altima has a nearly perfect sense of stability when it comes to balancing the quality of ride comfort and sportiness. Conversely, the new CVT (Continuous Variable Transmission) somewhat saps some of the sportiness from the new Altima. My Altima 2.5 SV test vehicle, featuring a retuned 2.5-liter 4-cylinder engine producing 182 horsepower and 180 ft-lbs. of torque, proved to be quite the able powertrain. Mated to Nissan’s latest CVT, reducing friction and improving efficiency, mesh well for a slight adaptive athleticism. Nevertheless, the CVT can be somewhat of a deal breaker for enthusiasts, and for good reason, too. Initial acceleration is not always predictable but the new 4-cylinder Altima makes up for it after it gets moving to around 25 mpg all the way to 60 mph, yielding a 0-60 mph time of 7.4 seconds.

Completing the new 2013 Altima’s redesign is a new classy interior with innovative “Zero-Gravity” front seats influenced from NASA research for reducing fatigue and increasing comfort. Seating areas have plentiful space even for people over 6-feet tall. There is an abundance of front legroom, over 45-inches. Lateral support for the front seats is acceptable and well adapted to the new Altima’s conservative handling abilities. Rear seats have plenty of space also, providing over 36-inches of legroom and just enough headroom for 6-foot-plus tall individuals. 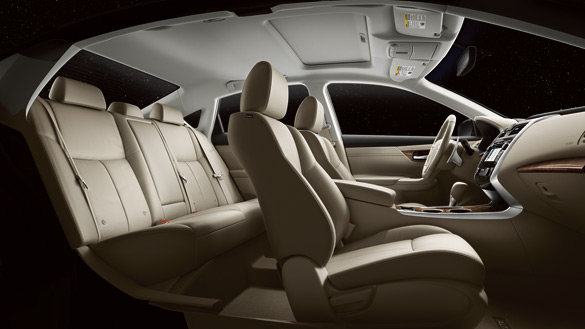 The new dashboard of the 2013 Altima gets a new brightly lit instrument cluster with a color information screen between the speedo and RPM gauges. The color information screen is easily accessed through steering wheel buttons, giving the driver several customization display options and vehicle information details such as tire pressure, temp, fuel economy, trip computer, service/alert options and maintenance. Moving from the instrument cluster across the padded dashboard, the new Altima gets an optional 5-inch color LCD touch-screen integrating the optional GPS navigation system, audio, Bluetooth audio streaming and Bluetooth phone connectivity. The newest infotainment system is very responsive and easy to navigate. New advanced features that come with the optional navigation package include send-to-car directions, Google POI (point of interest) and Pandora.

The highlight of my test drive with the new 2013 Nissan Altima was the astonishing fuel economy. The segment leading 38 mpg highway figure is an easily attainable number. Believe it or not, during my highway drive for an even 30 miles at a steady pace of 60 mph, I was able to muster out just over 40 mpg. City driving the Altima is estimated to get 27 mpg. I saw about 26 mpg when pushing it relatively hard around town. Still, the new Altima has once again pushed the envelope for midsized sedans, almost reaching hybrid fuel efficiency numbers on the highway, all without the added cost. 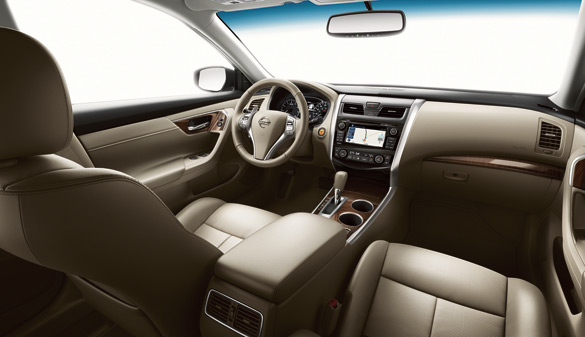 Those in the market for an affordable midsized sedan will naturally have their calendar booked up with so many new offerings. However, the all-new 2013 Nissan Altima begs to win consumers over building upon its record sales last year, only beat out by the Toyota Camry, to give the market something fresh and worthy of praise. Starting price for the new 2013 Nissan Altima 2.5 base model starts at just $21,500. With a versatile trim selections, 2.5, 2.5 S, 2.5 SV, 2.5 SL, 3.5 S, 3.5 SV, 3.5 SL, you have plenty to choose from. The new 2013 Altima serves up a large selection of available features, such as Blind Spot Warning, Lane Departure Warning, 7.0-inch touch-screen GPS Navigation system, backup camera (standard on all trims except base 2.5) and Intelligent Key with Remote Start. A fully loaded 3.5 SL V6 Altima, starting at $30.860, may end up tipping the price scale to about $32,000 est. for a fully-loaded configuration. Still, the new Altima remains to be a good deal for entry-level luxury.